It started with the conversion of downtown Victoria’s iconic Hudson’s Bay building into a uniquel... 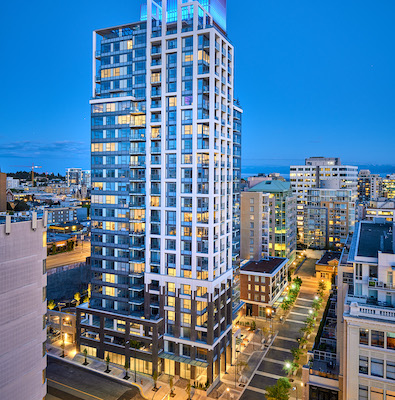 Hudson Place One condos is the latest addition to the Hudson District development in downtown Victoria, by Vancouver-based Townline. (Courtesy Townline)

It started with the conversion of downtown Victoria’s iconic Hudson’s Bay building into a uniquely historic condominium project called The Hudson Building.

Vancouver-based developer Townline completed the heritage restoration, in the 1700 block of Douglas Street, in 2010.

Presales had been impacted by the global economic downturn of the previous two years according to Chris Colbeck, Townline’s senior vice-president development, sales and marketing, and the developer ended up selling finished units.

However, the initial Hudson Building sold out and set the stage for downtown Victoria’s multi-phased Hudson District, which will comprise six residential buildings once built out.

“Obviously, the market and the economy globally was affected with the financial crisis, and Victoria was not immune to that,” Colbeck told RENX.

“So going through the closing process, like every developer, was a bit of a challenge and we had to work with our buyers to get it closed — not for lack of wanting to, but lack of ability.

“But, we were very successful in the number of homes we closed and part of the benefit of that was also the opportunity to sell the remainder of the building as finished product.”

With Hudson Place One, the developer is again touring potential buyers through a finished building. The 176-home building is 75 per cent sold, the sales centre is open, and to sell the remaining units they’ve been offering promotional packages including a three-year holiday from strata fees.

Hudson Place One is the tallest condo building in Victoria at 25 storeys, with a clear view of the famous harbour. The remaining 49 units include one-bedrooms starting at $433,900, two-bedrooms at $611,900 and one of three penthouses priced at $2,699,900.

“I’ve been doing this about 30 years now and what’s exciting about the opportunity to show finished product is we’ve all been conditioned to a hasty presale market, where people buy off of plan,” Colbeck said.

The timing is right. It’s been a promising fall for condo sellers in the region. Victoria Real Estate Board statistics show October condo sales were up 70.8 per cent year-over-year.

The strategy for the Hudson District was to create a community for a diverse demographic by offering rental and ownership properties at a range of prices.

Once built out, there will be 970 homes at Hudson District.

The developer also has another project underway in Victoria, but it is in the early design stage.

The majority of buyers at Hudson Place One are local people who aren’t new to ownership and who intend to live in the units.

“About 33 per cent of our homeowners are first-time buyers and the rest are repeat buyers,” said Colbeck. “Out of that, as far as investment to rent, we have approximately 30 per cent investors and 70 per cent are end users.”

Victoria a different market than Vancouver

That’s a different scenario from Vancouver, he said, where investors usually outnumber end-user presale buyers on a 60/40 ratio.

More than half of Hudson Place One buyers so far have been from elsewhere on Vancouver Island and about one-quarter are from the Lower Mainland, with several from Ontario and Quebec, and a handful from the U.S., he said.

Townline saw opportunity in Victoria 20 years ago, with its established demographic bound to university and government jobs.

“Geographically, it was good diversification for us,” said Colbeck.

Within the growing community are street-facing retailers and vendors inside the 18,000-square-foot Victoria Public Market at the retail level of The Hudson Building.

The market is a first for Townline, which has a long history of mixed-use projects since it was established in 1981, initially as a builder of single-family homes.

A big part of the approach at Hudson District was the offering of a comprehensive amenities package, with gyms, dog runs, work rooms and gathering areas inside the buildings, and retailers, optometrist offices, bank branches and other conveniences just outside the door.

“It’s an important part of it, because you want to create these walkable communities . . . both for residents and the people that visit the Hudson District. Otherwise, you are a simple infill project.”

Townline has applied the amenities-rich concept to its rental buildings and condominiums in equal measure in order to build community.

“People are able to make this a true home, whether it’s a rental or it’s a condo. And it is an affordable option compared to other alternatives where they may not get all these lifestyle options.

“Just like our retail partners, it’s better for us to keep tenants than have turnover, and to do that, we need to focus on ‘How do people live in their rental home?’ just like we do with a condo,” said Colbeck. “These are people’s homes that they want security of tenure.”

Because most of the company’s projects have a mixed-use element, partnerships with commercial tenants are key. Colbeck said Townline was highly selective in its retailers to ensure the right fit for residents.

Like most every commercial district, however, some of its retailers have had to apply for government programs to help cover some of their rents during the pandemic.

“We have amped up our communication and relationship strategy with each of our tenants to help them through our process, and that continues through all our properties,” said Colbeck.