Canada’s largest provider of purpose-built rental development, Starlight, is planning to build Me... 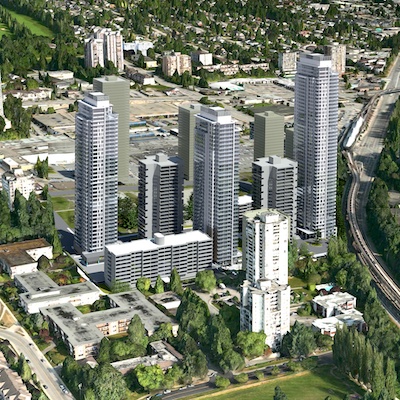 Starlight’s development plan for Lougheed Village in Burnaby would add three towers and about 1,200 additional apartments to the community. (Courtesy Starlight)

Lougheed Village, which would create a 1,728-apartment rental complex near Lougheed Mall, is going through the City of Burnaby’s rezoning process.

It’s part of the company’s ongoing move into the British Columbia market. The company has 4,800 rental units in B.C., but during the next 10 to 15 years aims to add 7,500 units to its development portfolio according to Josh Kaufman, Starlight’s head of development and construction.

Toronto-based Starlight, which has regional offices in Calgary and Vancouver, purchased the 7.4-acre Burnaby complex in 2015, which came with four 1970s-era rental buildings, and 528 apartments. A key strategy is to add value to existing properties, such as the major renovations that have already taken place at Lougheed Village.

“When we bought this in 2015, that was the goal — we saw the assets,” Kaufman told RENX. “We knew that we had an opportunity to add some serious value to the asset. So we have been investing in that since 2015, whether it’s suite turns, new lobbies, new amenities, space configurations, enhance suites where we needed to.

“But that’s our typical program. That’s the central core of Starlight; that’s what we do across the country. That’s made us a successful company that is largest and has AUM (assets under management) of $20 billion.”

For the last couple of years, the company has been going through the rezoning process to add significant infill. Initially the plan was for two new towers and about 1,000 units.

A few months ago, it re-submitted the proposal and added more density.

The Lougheed Village plan now includes three new towers at 36, 39, and 48 storeys, and 1,200 units, which will go to public hearing. Including the old renovated towers, the complex will consist of 1,728 units when built out, and more than 12,000 square feet of commercial amenity space, including a health club, daycare and café, as well as gyms, community kitchens, rooftop gardens and other amenities.

“We went from the purpose-built rental asset management to an opportunity to put seven towers on a property and to essentially triple the density,” said Kaufman. “It’s probably one of the most ambitious projects that I’ve been involved with, and I think the company has been in involved in, in the Greater Vancouver area.

“We are doing other mixed-use development projects in B.C., but this is the most significant to date.”

Starlight Developments, which is part of Starlight Investments, is Canada’s largest owner and operator of purpose-built rental housing. As part of the company’s recent growth, it has made significant inroads into the B.C. market, with assets in Burnaby, New Westminster, North Vancouver, Mission, Victoria, Saanich and Nanaimo.

“I do believe there has always been a strong interest in the market. But the fundamentals over the past five years definitely make sense,” he said. “I think it’s immigration and let’s call it low supply.

“I think there’s been some change in market behaviours and I think the focus has been on markets that are poised for growth and success — and in my opinion, Vancouver is at the top of the list. And I am more speaking of the Lower Mainland, and also speaking about the Island.”

The growth of Starlight

The company itself is seeing major growth.

“Definitely in terms of assets under management, we’ve almost doubled in size, and in terms of employee growth, we’ve increased substantially,” said Kaufman. “I would define us as entrepreneurial. We’re opportunistic. We’re not merchant developers. We are long-term developers and investors.”

The Burnaby proposal fits with the city’s Lougheed Town Centre Plan. It allows for significant transit-oriented development to the neighbourhood, which is linked to the region by rapid transit.

“We will engage the community wherever possible. We want to know what’s important for them, because at the end of the day, this is something that we are trying to hold the long term. This is about an investment for the future. We want to make sure we are received well, and obviously there is market reception and growth for the future.”