How much warehouse you can buy today vs. 2021: Sellers, take note

GUEST SUBMISSION:  The year was 2022 and it had been a relatively steady 40 years of declining interest rates from the peaks of 1981 where the Bank of Canada rate reached a whopping 21.46 per cent.

Many (most) of the current workforce had only ever seen downward-trending interest rates, with the youngest generation of adults viewing rates at historical lows as the “norm”. However, the time came to pay the piper for years of unsustainably cheap money when the global economy careened into increasing and relentless inflationary levels.

This prompted fiscal measures (a.k.a. rate hikes) in an attempt to control the effects of years of unwavering fiscal stimulus and heedless spending.

While the transitions through business cycles can affect consumer confidence and create uncertainty in the financial markets, it’s important to realize we are still a long way from 20 per cent interest rates, and remain, at present, in historical low territory.

Having said this, it’s obvious that a 3.25 per cent increase in the BOC benchmark rate over just a six-month period will have some tangible consequences.

I am going to outline the facts behind affordability in the commercial real estate sphere compared to 12 months ago.

We'll also examine how this is affecting our owner/user clients (who would occupy their own building) and our investor clients (who are looking for tenanted assets with a return on their money). Spoiler alert . . . property values are (gradually) eroding. 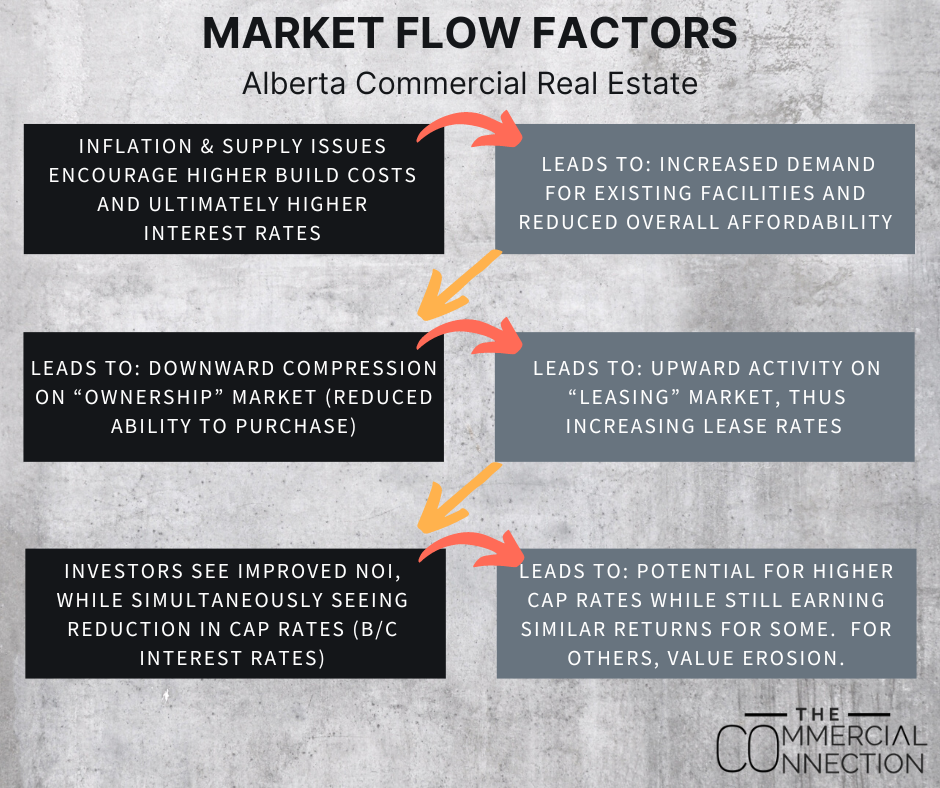 I like flow charts, so I’ve provided a simplistic analysis through flow to outline some of the big-picture elements affecting the commercial real estate market in Alberta and more broadly across borders.

The aforementioned factors are affecting both owner/user businesses as well as investors who have been extremely active in recent years through the acquisition and sale of commercial real estate assets across the province.

Each purchaser is analyzing the current market fundamentals uniquely to their goals of ownership.

I’ll outline below the effect current market conditions are having on each group.

The year was 2021 and business had been good!

You (business owner) were willing and able to put down 20 per cent equity on the purchase of a commercial real estate asset for your operation.

You had been quoted a monthly payment of $40,000 for a $10 million facility but, for reasons out of your control, could not close on that specific property. Fast forward 12 months – what could you buy today for the same payment?

Generally speaking, spreads on five-year debt are about 200 bps over the five-year GOC Bond (up from 180 bps last year). This correlates to an estimated two per cent increase in interest rates in the past 12 months which seems minimal, but as you see from the image, can correlate to massive differences in affordability for a business owner.

Unfortunately, many industrial businesses in Alberta, particularly in the manufacturing sector, have been battling debilitating federal energy policies for the past seven years. This has prevented them from taking advantage of the low interest rates due to other market factors (even though most major markets in North America were on a 15-year tear).

While the above comparison is simple in nature, it highlights why so many deals have died over the past six months as purchasers on the cusp of affordability have had to transition back to the leasing market. It also highlights why there is heightened competition for smaller, lower-valued facilities.

Higher-priced buildings will be competing over a much smaller pool of qualified buyers as the interest rates continue to increase.

Investors have been purchasing income-producing assets for record-setting low capitalization rates in recent years because the low debt costs allowed for return requirements to still be achieved.

We’re currently sitting in a transition period where the mortgage interest rates have increased over two per cent in the past 12 months. However, seller cap rate expectations have lagged, overvaluing assets.

In fact, according to Brandon Kot, managing partner at Canada ICI: “If you indexed cap rates in Q3/Q4 2021 against interest rates during that period, values in multifamily assets would need to correct north of 20 per cent and commercial assets north of 15 per cent today in order to maintain the same levered returns. This doesn't even take into consideration that yield expectations on the cost of equity have drastically changed in the last 12 months which would make a correction in asset values that much more acute. (The assumption on the level of value erosion is magnified in multifamily assets because of the prevalence of longer amortization periods (40 years plus).” 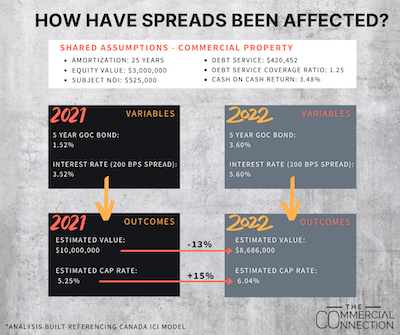 Looking at the following simple case study, I’ve compared an asset achieving an NOI of $525,000 in 2021 to today. In order for this asset to maintain the same DSCR and cash-on-cash return variables, the current value would reflect these downward pressures.

Ultimately, the market will dictate the price corrections that will take hold in the coming months, but it is important for building owners considering a sale of their properties to realize that these are the metrics purchasers are dealing with when determining today’s values.

The silver lining for some building owners is that if they have rollover or vacancy they may see improvements in their NOI due to increased market activity and competition for space. This improvement in rents and income could potentially increase in line with the upward adjustment of cap rates.

For those not experiencing these improvements in NOI, first, call an expert to assess the situation. Second, these assets do present a high probability of devaluation.

This article originally appeared on Bronwyn Scrivens' Commercial Connection blog. It is reprinted with permission.

Bronwyn Scrivens Associate Broker, Omada Commercial
Website: https://bronwynscrivens.com/ Bronwyn began her brokerage career with Cushman &amp; Wakefield in 2014, transitioning to Omada Commercial in 2019 to grow the Industrial Team. Prior to this, she graduated from Cornell University in Hospitality and Facilities Management with a Major in Commercial Real Estate studies. Bronwyn sits on the NAIOP Edmonton Board of Directors, is the Chair of the NAIOP Edmonton Developing Leaders Committee, and is actively involved with NAIOP corporate. She was also honoured to be chosen as one of 10 leaders from across North America for the Prologis and NAIOP Diversity in Commercial Real Estate Award. Bronwyn is highly regarded as a thought leader and disruptor in her market.