InterRent Real Estate Investment Trust acquired a record number of units and saw both its occupan... 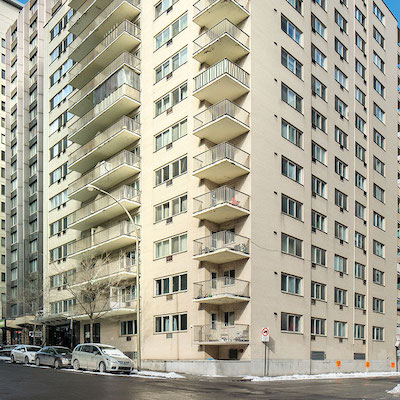 The Ottawa-based REIT (IIP-UN-T) released its fourth-quarter and year-end results on March 8 and its top executives hosted a webcast presentation and conference call to discuss the performance and some of the trust’s business initiatives.

“We’ve really held fast on keeping our rents and not worrying about occupancy,” chief executive officer Mike McGahan said during his opening remarks. “We’ve actually utilized that time to make upgrades for units.

“We felt that, in the long run, that was the better move. We felt a lot of pain for a couple of years over it, but I feel very confident that it’s the right move and I think we’re all going to see some good things coming forward for the company.”

InterRent’s strategy is to: expand its portfolio primarily within markets that have exhibited stable vacancies and have sufficient units available to attain the critical mass necessary to implement an efficient portfolio management structure; and offer opportunities for accretive acquisitions.

InterRent acquired 1,829 units at a total purchase price of $727.3 million (at 100 per cent share) during 2021, including its first properties in Vancouver.

McGahan said it’s difficult to acquire scale in Vancouver, but once you have it you can add to it. InterRent acquired 50 per cent shares in 19 properties with 809 units valued at $382.9 million through four Vancouver transactions in 2021.

InterRent also acquired a 50 per cent stake in two Vancouver properties with 57 units that had a combined price of $25.6 million earlier this year.

“We’re one of the few players that do have a platform there and I think it’s going to work incredibly well,” said McGahan.

– six properties with 574 units valued at $234.5 million in Toronto, Oakville and Mississauga;

– two properties with 169 units valued at $52.5 million in Montreal and Westmount, Que.;

– and one property with five units valued at $4 million in Ottawa.

The Mississauga acquisition was a 50 per cent stake, while InterRent fully owns the rest of the properties.

“It’s competitive out there and there’s lots of capital chasing our asset class,” said president Brad Cutsey. “We aren’t willing to get caught up in the frenzy at any price.

“We have not relaxed our underwriting requirements or our internal return hurdles. We’ll continue to only pursue deals that make sense and will create value over the long term.”

While occupancies improved in all of the REIT’s core regions, it was most pronounced in Vancouver, where the vacancy rate at its newly acquired properties dropped from 16 per cent in the first quarter to 3.7 per cent by the end of 2021.

“We still have some vacancy in the cores in our markets,” said McGahan. “Montreal is where we’ve had the hardest time, but I truly believe that once immigration and international students come back that that will come back, too.

“We’ve seen it in Ottawa and also in Toronto in the cores. I have to tell you I’m surprised that Ottawa has held in as well as it has, especially because we’re not seeing as many people as we would like to in our downtown core.”

Operating revenues grew 20.1 per cent to $50.3 million in the fourth quarter, finishing the year with a 15.8 per cent improvement over the previous year at $185.1 million. Occupancy gains, a five per cent increase in average rent per unit and successful acquisition activity are credited with the improvement.

The average term to maturity for InterRent’s mortgages is 3.6 years, with a weighted average interest cost of 2.38 per cent.

Sixty-three per cent of mortgages are Canada Mortgage and Housing Corporation-insured. Chief financial officer Curt Millar expects that to return to historical norms in the 80 per cent range while increasing the average term to maturity to about six years by the end of 2022.

The weighted average interest cost is expected to rise by 15 to 20 basis points.

Maintenance capital expenditures have remained consistent on a per-unit level for the past few years, at close to $1,000, according to Cutsey.

“About a third of our portfolio is at various stages in our repositioning program,” said Cutsey. “We see great value-creation potential in the years ahead. These properties will undergo work in a couple of years, with individual suite upgrades following the cadence of natural resident turnover.

“Our approach is to apply repositioning expertise to create beautiful, safe and quality communities for residents to call home by simultaneously extending the useful life of the existing housing supply and creating value for all stakeholders.”

InterRent believes this is a win-win strategy for all stakeholders as well as a climate-conscious option, since the program extends the benefit of the embodied carbon in existing structures while also loading up on energy-saving measures and fixtures.

“We’re not a short-term results company,” said McGahan. “We’re building this for the long run.”

InterRent is adaptively reusing obsolete office stock at 473 Albert St. in Ottawa. It expects to complete 158 residential units in Q4 2022 after a total investment of $73 million. It is forecasted to offer a yield of 4.4 per cent.

– a 47.5 per cent share of a property at 900 Albert St. in Ottawa that’s in the planning stages. It’s anticipated to have 1,241 residential units and approximately 510,000 square feet of commercial space, with the earliest start date in early 2023;

– a 100 per cent share of a property at Richmond Road and Churchill Avenue North in Ottawa. Also in the planning stages, it’s anticipated to have 180 residential units and approximately 19,000 square feet of commercial space, with the earliest start date later in 2022;

– and a 25 per cent share of GO Transit land in Burlington that’s in the planning stages and is anticipated to have 2,514 residential units and approximately 40,000 square feet of commercial space. It could also start as early as later this year.

There are also intensification opportunities at existing InterRent properties, according to McGahan.

Don Wilcox Commercial Transactions Ottawa Feb. 24 2022
Steve McLean Business reporter
Steve is a veteran writer, reporter, editor and communications specialist whose work has appeared in a wide variety of print and online outlets. He’s the author of the book Hot Canadian Bands and has taught reporting to college students. He is based in Toronto.