Despite ongoing economic uncertainty, Canada remains a good place to invest according to senior e... 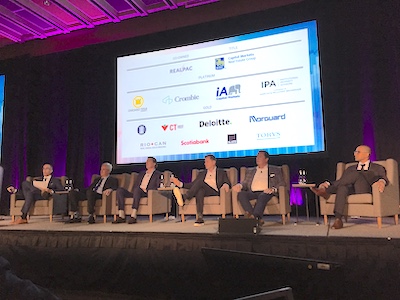 Despite ongoing economic uncertainty, Canada remains a good place to invest according to senior executives who closed the Sept. 8 RealREIT conference at the Metro Toronto Convention Centre with a panel discussion moderated by RioCan REIT (REI-UN-T) president and CEO Jonathan Gitlin.

Other Western countries are facing similar issues, but Europe also has concerns about an energy crisis resulting from the war in Ukraine. So, Canada still has plenty of appeal despite being a relatively small real estate market with limited opportunities.

“I think that Canada has a unique advantage of being one of the most investable countries on Planet Earth,” said Mark Kenney, president and CEO of CAPREIT (CAR-UN-T), which owns or has interests in approximately 67,000 residential apartment suites, townhomes and manufactured housing community sites across Canada and the Netherlands valued at approximately $18 billion.

“It’s a safe society. We have low environmental impact coast-to-coast. And from a real estate point of view, we’re really a country with three cities: Toronto, Vancouver and Montreal.”

Canada is a safe investment haven

Institutional investors from Canada and Europe have told Kenney they see the world’s second-largest country (by land area) as a safe haven.

“Long-term investment in Canada makes sense; however it could be bumpy for a little while,” said Slate Asset Management founding partner Blair Welch.

“The good news is that there is an enormous amount of capital available for investment,” said Adam Paul, president and CEO of First Capital REIT (FCR-UN-T), which has $10.2 billion of assets under management.

“And that capital has an increasingly higher bias towards alternative investments, like real estate, for its cash-flow characteristics and for its inflation-hedge characteristics.”

A number of non-Canadian entities are investing or laying the groundwork for investing in Canada, according to Paul.

“Canada is an increasingly more attractive place on a relative basis. We complain a lot about a lot of things, but our political stability is a positive factor globally.

“Our social status and quality of life that people afford in Canada is attractive along with the labour pool and the economic growth profile. So I think Canada, really since the the 2008 and 2009 downturn, has elevated its profile on the global stage.”

“As a foreigner coming in here, there’s not a lot of risk capital,” Welch added. “We have really smart real estate people and massive pension funds globally that dominate.

“It’s not like you can just waltz in here and do whatever you want. Canada is very, very protected because of our system.”

While Welch acknowledged Canada’s controlled capitalism can be protective during times of disruption, it can also limit some potential upside.

REITs trade at a discount to value

“Public markets don’t respond in a calm fashion when you’re going through a period of change,” said Paul. “Public markets typically get the direction right but the magnitude wrong.”

Kenney said 70 per cent of CAPREIT’s capital stack comes from retail investors, many of whom are stressed, scared and aren’t thinking long-term.

Low share prices offer great opportunities for REITs to purchase their own stock for long-term gain and he thinks other investors should also take advantage.

One of Slate’s current investment strategies is buying global REITs at a discount to net asset value because you’re investing in their skilled management teams as well as their properties.

Welch said there’s very little capital available from lenders for large deals, but there is for smaller ones.

Granite REIT president and CEO Kevan Gorrie talks to institutional investors on a regular basis and said almost all have told him their capital allocations aren’t being impacted by current economic factors. While a lot of capital is on the sidelines now, he thinks it will return.

Welch said development took off because of the cheap cost of capital and, now that it’s becoming more expensive, Slate is being more selective.

He’d rather lend money or buy a REIT than develop and thinks he can now buy some assets without taking the time risk associated with development.

Industrial yields were very tight in 2021 so Granite decided to embark on an ambitious program to develop 5.5 million square feet. This requires capital expenditures without immediate returns from income, but it adds value for unit holders over the longer term.

Granite has been getting better yields than expected from development because rent growth has been greater than anticipated.

Last year presented a greater challenge for costs than this year because construction materials were harder to come by and container and shipping costs were higher, according to Gorrie.

“We’re in this period now where inflation is hitting us for sure, but cost pressures on the construction side have moderated.”

Steve McLean Commercial Development National Sep. 13 2022
Steve McLean Business reporter
Steve is a veteran writer, reporter, editor and communications specialist whose work has appeared in a wide variety of print and online outlets. He’s the author of the book Hot Canadian Bands and has taught reporting to college students. He is based in Toronto.