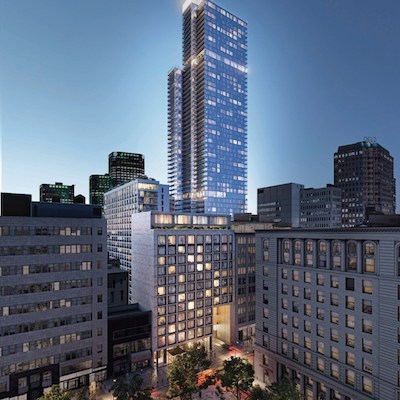 Financial terms of the partnership have not been announced, but Brivia has valued the 1 Square Phillips project at $560 million. Construction of Phase One, the 61-storey luxury condo and rental apartment tower at Square Phillips, is already underway.

“We are proud to continue our growth with a recognized partner in Quebec for supporting the development of large-scale real estate projects,” said Kheng Ly, founder, president and CEO of Brivia Group, in the announcement Tuesday morning.

“This first partnership with IPSO FACTO Real Estate Fund allows us to combine our respective strengths and aligns with Brivia Group’s desire to partner with companies that are committed to the development of quality real estate projects.”

Construction began last July and has been progressing on schedule. At the time of construction, 75 per cent of the 498 condominium units had been sold. Since the beginning of 2021, Brivia said sales have “been stimulated by the effervescence of the market.”

The tower is being built between Place Phillips and Saint-Alexandre, in the quadrilateral bounded by Sainte-Catherine Street and René-Lévesque Boulevard. It will reach a height of approximately 763 feet (in relation to the level of the St. Lawrence River). It is to be delivered in 2024.

“We are very selective in our partnerships and encourage the development of well-managed real estate projects led by experienced people like those of Brivia Group,” said Serge Robitaille, president and managing partner of IPSO FACTO, in the release.

“With 1 Square Phillips, a unique and flagship project for Montreal, Brivia Group is once again demonstrating its know-how and its ability to carry out solid real estate projects with a promising future.”

IPSO FACTO is an investor focused mainly on the Quebec market. During its 19-year history, the firm has established multiple partnerships, been involved in over 220 projects and partnered in the development of $5.5 billion worth of assets, according to its website.

It has been involved across a wide variety of sectors from industrial, commercial and office to traditional rental apartments, condos and retirement homes.

Founded in 2000, Brivia Group is a rapidly expanding real estate developer with a growing number of major projects in Montreal, Quebec City and Toronto.