Ivanhoé Cambridge says it will invest $200 million to redevelop the downtown Montreal Eaton Centre, including merging it with the neighbouring Complexe Les Ailes shopping centre. 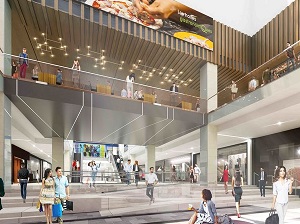 In a release, Ivanhoé says the project “aims to enhance the shopping experience at Quebec’s busiest shopping centre on Sainte-Catherine Street, one of North America’s most well-known commercial streets.”

Between them, the Montreal Eaton Centre and Complexe Les Ailes attract more than 30 million visitors annually, the company says.

“Sainte-Catherine Street’s great strength is its ability to reinvent itself continually,” said Claude Sirois, president, retail at Ivanhoé Cambridge in a release. “Our demanding clientele wants an innovative and sustainable project that stands out for its urban character. With the physical changes we are making and the collaboration of our current and future retailers and brands, we are setting out to redefine the urban shopping experience downtown.”

When complete, the centre will provide a redefined and enhanced commercial offering, “that will exemplify the newest trends in retailing and the new means of consumption, including a gourmet food hall,” Ivanhoé says.

The shopping centre, which already connects to Montreal’s underground city, will also benefit from the renovation of Sainte-Catherine Street West as well as from the future McGill light rail train station which is part of the Réseau électrique métropolitain (REM) and the densification underway for several years in the area.

The Montreal Eaton Centre contains about 130 stores and restaurants.

Although the mall doesn’t rank among Canada’s top 30 in sales per square foot (as per Retail Council of Canada 2017 Canadian Shopping Centre Study), it is the fourth-busiest shopping centre in the country in terms of visitors, with an estimated 24,100,000 last year.

It has been owned by Ivanhoé Cambridge since 2000.

Currently, the 11-storey Complexe Les Ailes is a mixed-use building, with retail on its lower floors and office space above. The building was constructed in the early 1900s, and has been enlarged and renovated several times over the years.

It was purchased by Ivanhoé Cambridge in 1999 and underwent extensive renovations at that time.

On Tuesday, Ivanhoé Cambridge had announced it was investing an additional $60 million in Quebec City’s Laurier Québec shopping centre. That adds to $18 million it had already invested in the centre’s food court.

The redevelopment of the Montréal Eaton Centre is the final chapter of Projet Nouveau Centre, Ivanhoé Cambridge’s five-year plan to invest $1 billion in its flagship holdings in downtown Montreal:

Ivanhoé Cambridge is a global real estate industry leader, investing in high-quality properties and real estate companies in select cities around the world. Founded in Quebec in 1953, Ivanhoé Cambridge has built a vertically integrated business across Canada. Internationally, the company invests alongside key partners and major real estate funds.