Kelson Group has revealed plans for a $140-million multifamily development in downtown Kamloops,... 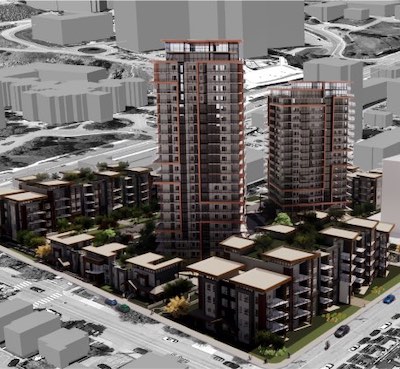 “We started pursuing these properties in the mid-1990s,” Kelson president Jason Fawcett told RENX. “The previous owners were developers of two adjacent 10-storey rental apartment buildings that the family originally built in the late 1960s.

“Since that time, they had acquired most of the homes that are involved in our development. They owned 18 of the 22 lots.”

When the local family decided to sell, the property was offered first to Kelson. The Kamloops-based developer acquired it in 2017 for $34 million.

“It was a great opportunity to come up with a new vision for Kamloops,” said Fawcett.

That vision includes: 22- and 18-storey condominium towers; three four- to five-storey purpose-built rental apartments that Kelson will own and manage; and six townhomes. The current design concept has 445,000 square feet of residential space over approximately 435 units.

Expectations are that up to 60 per cent of the units will be market condos and the balance will be rental suites. Interest from the community will determine the final allocation.

The 3.5-acre property will also include:

* up to 600 underground parking stalls over three levels;

* a linear park with bench seating and walking paths;

* a terrace garden, water features and a Zen garden;

* and a natural play park area.

To build out the vision of City Gardens, Kelson is discussing the purchase of a portion of Nicola Street and a laneway between Nicola and Battle Streets. Those acquisitions must still be negotiated with the City of Kamloops.

Kelson plans to work with each resident of the two streets to ensure they have time to make alternative housing arrangements well before construction begins. After receiving feedback from upcoming community consultations, Kelson plans to apply for a development permit in early 2021.

The goal is to launch sales in late 2021 and to start construction in the spring of 2022. The entire project could take six to seven years to complete.

Fawcett said financing for City Gardens is still to be determined.

“We need to go through the pre-sales for the condo buildings, and for financing for the rental buildings we’ll work it out with our existing lenders and people that we’ve worked with over the years.”

Kelson owns and manages approximately 1,200 apartment units in Kamloops, a city of more than 100,000 in south-central British Columbia, about a three-and-a-half-hour drive from Vancouver. Fawcett said the vacancy rate is under two per cent and rents are strong.

“Housing has continued to do well during the pandemic and we’re well-situated to benefit from people who might want to escape the lower mainland of Vancouver. . . . And we’re less expensive than Kelowna.”

Kelson is not the only builder active in the city at the moment.

Fawcett called the office development and City Gardens “a sign of positive economic times in downtown Kamloops and for the region.”

Legacy Square is a five-storey, 77-suite rental building on the Thompson Rivers University campus in Kamloops that was fully rented when it had its grand opening in early March.

Kelson is constructing two other buildings on campus, the five-storey, 42-unit Liberty Pointe apartment and a 40-unit condo — which will be the company’s first.

Kelson is developing a 51-unit apartment in Prince George, B.C., next to an existing apartment complex it owns.

Kelson’s history and move into development

The firm is owned by Kelson Investments Ltd., Roses Ice Cream Ltd. and F&N Developers (1974) Ltd., which have been in operation since F&N bought its first apartment in Kamloops in 1974.

Kelson’s largest market is Edmonton; it also has Alberta properties in Grande Prairie, Leduc and Sherwood Park. The company’s B.C. properties are in Abbotsford, Kamloops, Kelowna, Langley and Prince George.

“We’re still committed to Alberta, but a lot of the growth over the last few years has certainly been in British Columbia,” said Fawcett.

The company isn’t considering any other markets at the moment.

Development has only been part of Kelson’s mandate for a relatively short time.

It bought a building in Abbotsford in 2014 that had extra land. Management thought it would sit on that dirt, with an eye to future development in 10 or 20 years, before having a change of heart.

“We ended up talking with a builder in Abbotsford who basically held our hand and showed us the way on how to develop buildings and work with the city,” Fawcett explained. “It was very successful and we’ve taken off from there and continue to work very closely with the builder, Redekop Development Corp.”

Ron Fawcett had been president of Kelson since its inception before giving up the title to his son Jason, who was previously operations vice-president, earlier this year. Another son, Kelly, is VP of maintenance and construction.

The 80-year-old Fawcett’s new title is executive director and founder.

“It lets the community and our employees know that we have a succession plan into the future and we’re planning to be here for many more years.”

Construction underway at The Reach in Kamloops

Steve McLean Residential Market Trends National Sep. 18 2020
Steve McLean Business reporter
Steve is a veteran writer, reporter, editor and communications specialist whose work has appeared in a wide variety of print and online outlets. He’s the author of the book Hot Canadian Bands and has taught reporting to college students. He is based in Toronto.