Keltic Canada Development, a relative newcomer to the Metro Vancouver development community, has... 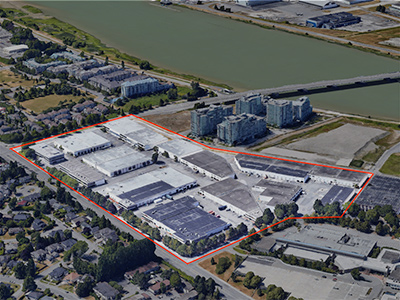 The property, located at No 2. Road and River Road, is a total of 27 acres in size. The $300-million purchase was one of Metro Vancouver’s largest property deals this year. (Courtesy Keltic Canada Development)

Keltic Canada Development, a relative newcomer to the Metro Vancouver development community, has paid more than $300 million for 27 acres of light industrial land adjacent to the Olympic Oval in Richmond.

The company now has its sights on building its first master-planned community.

“The team has been actively looking for specific assets and good development opportunities, so through brokerage industry friends we realized this 27 acres of land is off market and for sale,” managing director and chief executive officer Rachel Li Lei said in an interview with RENX. “And since March and April, we followed through with this acquisition.”

The deal, one of the largest in the region this year, finally completed Dec. 7. The team is now planning a multi-phased, mixed-use residential and commercial destination neighbourhood with retail, a public green space and public amenities.

There are currently more than 70 tenants on the property, which is mostly warehousing, located at No. 2 Road and River Road. While the city was involved in negotiations for 6.4 acres, QuadReal Property Group was the main seller of the other 20.3 acres.

Now the new owners figure they have at least three years ahead of them to get through approvals and into the first phase of development.

“We are approaching the city with the concept of this multi-use community with strata, market rental, low-end market rental and obviously retail and office space. We don’t know if there is room for light industrial,” said Steve Jedreicich, senior vice-president, development.

“What I do know is what we envision now will certainly change as we consult with the public, senior staff and mayor and council . . . it will be a wild ride for a little while to figure it out.”

Keltic is open as well to considering other public amenities, such as a fitness facility that could complement the Oval sports complex, or a seniors’ facility. Lei said it would be a point of pride to have public amenities available by Phase 1 or 2.

“Many years later when it’s still there, you can tell your kids you were involved in that project.”

Much of what they are proposing is very much up in the air, Jedreicich emphasized.

“It’s very early days, but we have to put something to paper about what our future plans could be, before sitting down with the city and proposing to them what we could do,” he said.

“But, based on the road network that the city is proposing in their official community plan, and how the blocks would work out, and where the park is located, we are looking at five phases, a couple of buildings each.

“They would be built in phases, so therefore warehouses, industrial on one end of the property, which would stay tenanted while we start phasing on the other side of the property. I think it would take us about three years to get through the public process and the approval of the master plan.

“And then construction, because it’s phased, could take another 10 years, depending on the market, and how quickly we can go, or whether we decide to pause for a little while.

“It’s tremendously exciting, as someone with a background as an architect, to basically build a little city here.”

Keltic has been in the Vancouver market since 2016, said Lei, but it’s a well-established developer in Asia. The owner of the family company, she said, immigrated to Vancouver in 2005.

“Since early 2016, we started to realize that real estate is good business here and we could contribute a lot to society.”

The company has already built several standalone commercial and residential projects throughout the Lower Mainland, including Richmond office and condo strata building The Paramount, which is completed and selling.

The firm is in a period of major growth, said Jedreicich.

“We haven’t had a community this large with Keltic to date,” he said. “We have been doing smaller projects, clearly. With this one and a few others we have on the hot plate — which will be probably announced later in 2022 — we are definitely picking up a lot more density, we are picking up bigger projects in various communities.

“With that we need more manpower, so we will be hiring the best in the business and bringing them into our office.”

Keltic has seven projects either completing or in the pipeline, said Lei.

The firm will start construction on a medical office tower called Nexus, near the new St. Paul’s Hospital in the spring, followed by the O2 tower, a 285-unit multiresidential project at Metrotown in Burnaby.

As well, it is in the pre-application stage for a 10-acre shopping mall property in Ladner and has plans for a 190-acre golf course redevelopment in Harrison Mills, two hours east of Vancouver. Keltic owns 30 per cent of that site.

“It is certainly Keltic’s mission to become a long-term real estate player in this market,” said Lei.

Seeking a large industrial space in Vancouver? There are none