Graham Wong ran an advertising agency before moving into consulting and often had time between cl... 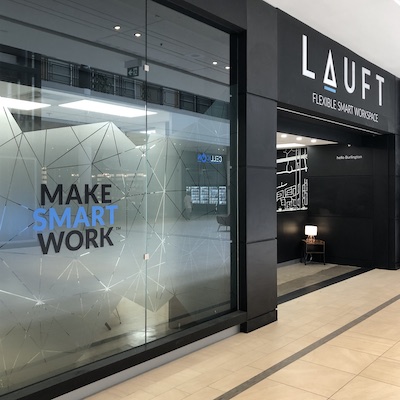 Graham Wong ran an advertising agency before moving into consulting and often had time between client meetings, but no place to work. That led to him founding LAUFT and opening its first location at Upper Canada Mall in Newmarket, Ont. in December 2018.

“The one thing that was missing was an on-demand, flexible work experience,” LAUFT’s chief executive officer told RENX. “We all do the best we can, whether we’re in an airport, a hotel lobby or a coffee shop. We’re trying to get a good work experience to be the stop-gap between our office or our home office.”

Time can be booked instantly by the hour, day or week at any LAUFT location using its intuitive mobile application. Users are only billed for the time they use at a desk, office, workroom or boardroom and have no other contract or membership commitments.

“We have a lot of companies that are calling us now because they like the idea of being able to find touch points for their workers with the hub-and-spoke model,” Wong said.

“They’re able to touch down in a LAUFT (location) because they know it’s a consistent experience and every one has a similar look and feel.”

Wong thinks the more traditional co-working space model makes a lot of sense because some companies need a central location for people to collaborate. He doesn’t see LAUFT being a direct competitor to companies providing that type of flex space.

“A lot of people live in the suburbs and outside of the core. A lot of people would love to have an opportunity to have a destination office, a home office and something right in-between. I think that’s right where our sweet spot is.

Three of the sites are currently operating with reduced hours, and Metro Centre in Toronto’s PATH system has been closed temporarily due to COVID-19, but the goal is to create a network of locations available 24 hours a day, seven days a week.

LAUFT first targeted malls for its locations because they’re used by a wide range of people and the arrangement made economic sense for both parties.

“Shopping malls were low-hanging fruit because there was the perfect storm where retail was facing some challenges,” said Wong. “So, we were able to test our concept and partner with some of the bigger guys.” 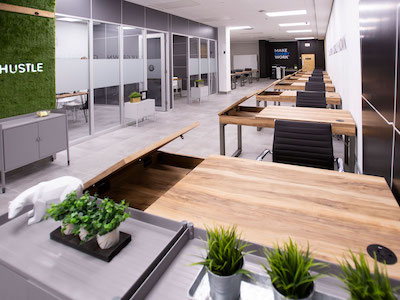 An interior view of the LAUFT Newmarket location. (Courtesy LAUFT)

LAUFT next plans to launch a 10,000-square-foot location in a partner’s self-storage facility in November, but no details are being released yet. Most current LAUFT sites have a footprint of about 1,500 square feet.

The goal is to open three new locations by the end of this year and 20 to 30 more in the Greater Toronto Area in 2021. Wong wants to see LAUFT go national and then global farther down the road.

He believes hospitals would also be a good fit once COVID-19 restrictions are lifted.

“When people want to spend time with and be close to loved ones who aren’t well, they’ll sometimes have to check in with work,” he said.

LAUFT has signed leases ranging from 18 months to five years for its locations. It uses a modular system that can be moved quickly and easily.

“If they need to move us into another space, we’re flexible and we work with the partners,” said Wong.

The oxymoron of office culture for remote workers

Steve McLean Commercial Market Reports National Aug. 19 2020
Steve McLean Business reporter
Steve is a veteran writer, reporter, editor and communications specialist whose work has appeared in a wide variety of print and online outlets. He’s the author of the book Hot Canadian Bands and has taught reporting to college students. He is based in Toronto.