RioCan Living and Marlin Spring have entered their first joint venture for a mixed-use residentia... 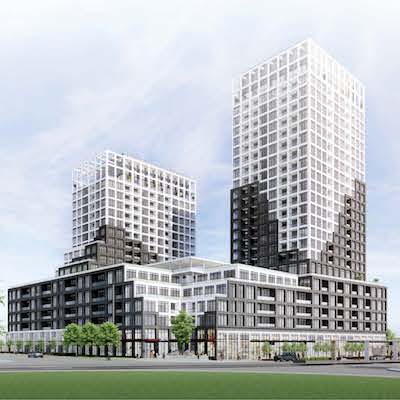 RioCan Living and Marlin Spring have entered their first joint venture for a mixed-use residential project on a 2.43-acre site at Sandalwood Square Shopping Centre in Mississauga.

RioCan REIT (REI-UN-T) has owned the property at the southeast corner of Hurontario Street and Bristol Road East for about 20 years. Retail tenants include Fit4Less, Value Village, McDonald’s and a variety of small convenience retailers, services and food outlets.

A 2017 fire destroyed about 15,000 square feet of retail and commercial space, including a bank branch and restaurants.

“The timing of a fire is never good,” said RioCan’s John Ballantyne, who was recently promoted to chief operating officer. “However, we knew that the LRT was coming in along Hurontario Street and, as we were ramping up our RioCan Living banner, we figured that it was a great site to put in a multifamily residential tower and keep the rest of our retail around it.

“We could build one phase and see how it goes and then continue on with the rest of the site if we feel it’s the appropriate thing to do.”

RioCan and Boardwalk REIT were originally partners for the project, but as work on its design progressed it was decided that it was more suited for a condominium than a purpose-built rental apartment.

“Boardwalk is a huge rental landlord, especially out in Calgary, and the decision on their end was that they would rather put their capital into rental projects than condo projects,” said Ballantyne. “So it was a pretty natural switch and they did the transaction directly with Marlin Spring.”

That transaction, which made RioCan and Marlin Spring 50-50 partners and co-developers, closed on Nov. 26. Other details of the transaction haven’t been disclosed.

“We’ve known the RioCan team and Boardwalk for some time, and when we became aware of the opportunity we were quite keen to get involved,” Marlin Spring president Ashi Mathur told RENX in a separate interview.

“They had determined that it was going to go the condo route and one of our core competencies is condo development and construction.

“We ended up working closely with both Boardwalk and RioCan over the last several months to simultaneously consummate the purchase and sale of Boardwalk’s stake and do a partnership agreement with RioCan.

“It was quite involved working with both parties, but it was a great process and we’re thrilled that we were able to get involved.”

The location is within walking distance of schools, parks, retail, workplaces and public transit. Highways 401 and 403 are easily accessible from the site.

While it’s relatively early in the process and not a lot of details are available, it’s expected the project will be comprised of about 400,000 square feet of residential space with approximately 510 units in 17- and 23-storey buildings connected by a five-storey podium.

“Like with all of our projects, we’re going to size the suites with a design that fits well within the area that we’re in,” said Mathur.

“Retailers will want to have a look at it as the tower is growing into the sky,” said Ballantyne. “But I would say that it would be something that will complement the rest of the retailers there.

“It would be more service-oriented. We would love to get some food in there and another bank on the site and uses that will be conducive to people living there.”

No firm timelines yet

Toronto-based RioCan and Marlin Spring are working on their next submission to the City of Mississauga for site plan approval. While no timelines have been established, Ballantyne is hopeful marketing for the project can begin in the spring of 2022.

“What’s front and centre in our mind is that we want to move as quickly as we can with our partner,” said Mathur. “We’re going to work closely with city officials and our consultants to bring this project to the market as quickly as possible.

“There’s a lot of demand for housing in that particular area and we want to do what we can to meet that demand and supply something right for that area.”

The two partners on the project

“We feel this is perfectly on brand for us and you’re going to see a lot more projects like this coming from RioCan over the next five years,” said Ballantyne. “We want to make sure that the RioCan Living brand is both condo and rental.

“We want to make sure that we’re building quality product that fits into the contextual design of the neighbourhood it’s being built in.”

Marlin Spring is a real estate investment firm that has acquired more than 45 projects consisting of more than 14,000 units in various stages of development, construction, repositioning and completion across Canada and the United States.

Its projects represent more than 13 million square feet of gross floor area and a value of more than $7 billion upon completion.

“This project fits perfectly within our acquisition criteria, which includes working with great partners and being located within proximity of public transit in growing neighbourhoods with strong infrastructure and amenities,” said Mathur.

“It’s not just about getting a building up and selling it.

“It’s having that thought process that whoever buys it will benefit from living in that area and that building or, if you’re an investor, that you’re comforted in knowing that you’ll be able to attract good tenants to it and you’re in an area that will continue to grow in value.”

Don Wilcox Commercial Transactions Toronto / GTA Nov. 2 2021
Steve McLean Business reporter
Steve is a veteran writer, reporter, editor and communications specialist whose work has appeared in a wide variety of print and online outlets. He’s the author of the book Hot Canadian Bands and has taught reporting to college students. He is based in Toronto.