Minto Capital Management has purchased and will immediately begin upgrading a 111-unit townhouse complex in Ottawa that has been the subject of headlines in local media during the past year. 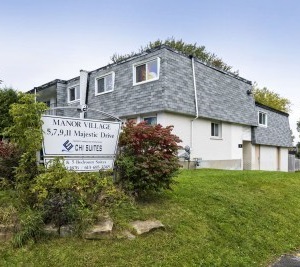 Minto announced this week it is the new owner of Manor Village, which had been listed by JLL in a receivership process. The property is located near Majestic Drive and Woodroffe Avenue in the former city of Nepean, west of the city’s inner core.

Manor Village has now been sold twice in recent years; it was bought by Golden Dragon Ho 9 Inc. for just under $15 million in 2014.

In May 2017, the property was the subject of complaints from tenants when their gas was shut off due to non-payment by the landlord – leaving them temporarily with no hot water or heat.

The buildings subsequently ended up in receivership last fall.

The purchase of Manor Village is the seventh acquisition for Fund II which launched in January 2015 with capital commitments of $158 million.

“We see a significant opportunity to revitalize Manor Village by applying our expertise in property and asset management with a view to drive solid returns for our investors,” Rob Pike, president of Minto Capital, said in a release announcing the purchase.

“With this purchase, Fund II is now 100 per cent invested in renewal initiatives across Canada with a targeted annual return of 14 to 17 per cent.”

In an email to RENX, Minto’s VP of investments Martin Tovey said there are no plans to relocate Manor Village’s current tenants while the renewal process takes place.

Other acquisitions undergoing renewal initiatives within Fund II include:

* International Hotel – a 254 unit, 34-storey tower operating as a hotel to be converted into multi-residential units in Calgary (closed Nov. 30, 2015);

Tovey said the upgrades and renovations are continuing at all of these properties.

Minto Capital Management is the investment management division of The Minto Group, a fully integrated real estate enterprise established in 1955 with expertise in asset management, property management, development and construction.

With 1,200 employees across Canada and the southern U.S., the company has built more than 85,000 new homes and currently manages 13,000 multi-residential units and 2.5 million square feet of commercial space.