Montoni Group will pay $18 million to acquire six million square feet of industrial land in the B... 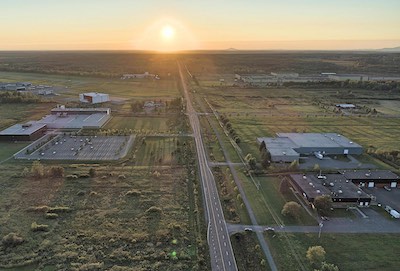 Montoni has acquired about six million square feet of industrial development land in the Bromont Science Park, in the city east of Montreal. (Courtesy Montoni)

Montoni Group will pay $18 million to acquire six million square feet of industrial land in the Bromont Science Park in the Eastern Townships city of Bromont, about 80 kilometres east of Montreal.

The land is located on Montreal Road and Innovation Boulevard and is near Highways 10, 20, 30 and 35 in Quebec. It is about a 30-minute drive from the American border.

Montoni hopes to begin construction at the site by late summer or early fall 2022, says David Paulozza, vice-president, planning and development. Under its agreement with Bromont, Montoni has an initial period of five years to develop the site.

“We buy land all over the region as part of our DNA,” he told RENX. “This was another good area – close to Montreal and the American border, so we thought it was a good purchase for our land banking that we do a little bit all over the region.”

Development at the site does not need to be for science-oriented clients, Paulozza said, noting demand is currently high for industrial head offices and distribution centres. Montoni is currently in discussions with potential clients.

Buildings will be a minimum of about 100,000 square feet and have height clearances of 32 to 40 feet, depending on client needs.

The site could also accommodate major distribution centres. “As long as you respect your setbacks and your parking ratios, there’s not really a maximum” potential size, Paulozza said.

Paulozza said the selling price of $3 per square foot may appear low, but it has to be factored in that the site is not in the Montreal core. “There has to be a little bit of an attractiveness in terms of the cost to get (companies) there.”

The site’s proximity to nature and outdoor activities including the Bromont ski hill, golf courses and bike paths, is also attractive to workers. “At lunch time, they can drive their bike and go on a trail and come back (in) an hour. It gives that flexibility for the workers.”

Bromont also has a small airport, Roland-Désourdy Airport, which is staffed by the Canada Border Services Agency.

Paulozza said since the pandemic began, many clients have expressed interest in having satellite sites in the regions and not directly in the Montreal core. “It gives that flexibility for that clientele.”

The Bromont Science Park is home to some leading companies in the designing and manufacturing of semiconductors, hybrid and integrated circuits, connectors, tinning equipment and electronic modules. Clients include IBM, GE Aviation and Teledyne Dalsa.

The site also has an industrial incubator and four research centres, including the MiQro Innovative Collaboration Centre, a fundamental link between applied research and the rapid commercialization of microelectronic products.

Montoni has a portfolio of close to 500 projects representing more than 20 million square feet of industrial, commercial, institutional and residential construction, including 30 head offices. The company has another 22 million square feet under development.

Paulozza said Montoni has other land holdings in the Montreal area that are larger than the Bromont site.

Montoni and its other projects

Among the company’s other major industrial projects is a new distribution centre of more than 100,000 square feet for  restaurant and food services company Groupe St-Hubert at Highways 640 and 25 in Mascouche.

It’s part of Montoni’s more than 1.6-million-square-foot CentrOparc business park in the city, which is about 40 kilometres north of Montreal.

Among its recent projects are the $450 million Espace Montmorency, a mixed-use complex adjacent to the Montmorency metro station in Laval. The project includes 700 residential units by Groupe Sélection and 500,000 square feet of office and retail space.

Another upcoming project will be development of the six-million-square-foot Molson Brewery site in downtown Montreal in partnership with Groupe Sélection and the Fonds immobilier de solidarité FTQ.

Montoni has more than four million square feet of LEED-certified buildings. For clients who don’t want LEED certification but still want to minimize the environmental impact of buildings, the company has its own program, called Distinction by Montoni.

Paulozza said the program takes into account the best existing sustainable initiatives and uses those that make the most sense in new builds such as green roofs, electric car stations and other initiatives to reduce energy and water consumption.

Danny Kucharsky Commercial Transactions Greater Montreal Sep. 14 2021
D
Danny Kucharsky Business reporter
Danny is a multiple award-winning journalist based in Montreal, who has written for about 75 magazines and newspapers in Canada and the U.S. His credits include The Globe and Mail, Montreal Gazette, Maclean's, Chicago Tribune and a wide variety of business, specialized trade and medical magazines. Danny was also the Montreal correspondent for Marketing Magazine for several years.