Morguard (MRC-T) has purchased one of Ottawa’s newest office properties for $64.5 million from Ta... 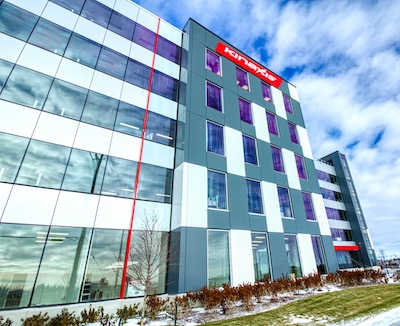 3199 Palladium Dr., in Ottawa, a five-storey office complex and adjacent land, has been acquired by Morguard. (Courtesy Cushman & Wakefield)

Morguard (MRC-T) has purchased one of Ottawa’s newest office properties for $64.5 million from Taggart Group of Companies.

The five-storey, 170,000-square foot building at 3199 Palladium Dr. in Kanata, which is fully leased by Ottawa-based supply chain logistics company Kinaxis, was occupied in the first quarter of this year after being design-built by Taggart Group.

“It’s brand-new construction in the Kanata market, which has been one of our best performing sub-markets and continues to be strong,” said Cushman & Wakefield Ottawa associate vice-president Scott Brooker, who brokered the deal along with senior VP Nathan Smith.

“When you look at the Ottawa market in general, in times of disruption with the economy nationally or internationally, Ottawa has proven to be a stable port in the storm. It’s a stable, strong market that weathers volatility well.

“Investors and institutional investors are attracted to this market at all points in the cycle, but I think more attention is put on Ottawa when there’s some sort of disruption or gyration in the market.”

That has been reflected again in recent weeks, with two other Ottawa offices also transacting. True North Commercial REIT is acquiring the 11-storey, 174,000-square-foot office building at 400 Cumberland St. The sale of that building, fully tenanted by a government agency, is to close on Aug. 15.

The site was originally acquired by Taggart Realty Management, which led the design and approvals process in cooperation with Kinaxis for the interior fit-up.

The deal also included adjacent land large enough to add another office building. Taggart had suggested a five-storey, 100,000-square-foot structure, but Morguard has made no announcement on what its future plans for the land might be.

“The strength of the Ottawa market and the nature of the building being brand-new and backed by a credit tenant attracted all walks of investors,” Brooker told RENX.

Brooker expects the Ottawa commercial real estate market to continue to perform well and he anticipates seeing continued transaction activity throughout the rest of the year.

The buyer and seller

Morguard is a fully integrated real estate company based in Mississauga that owns, manages and invests in assets across North America.

It employs about 1,300 and had $15.3 billion in real estate assets under management as of June 30 through three publicly traded entities: Morguard Corporation; Morguard REIT; and Morguard North American Residential REIT.

It employs more than 700 and offers a full range of real estate and infrastructure development services.

Other Taggart Group projects include:

Don Wilcox Commercial Transactions Ottawa Jul. 15 2022
Steve McLean Business reporter
Steve is a veteran writer, reporter, editor and communications specialist whose work has appeared in a wide variety of print and online outlets. He’s the author of the book Hot Canadian Bands and has taught reporting to college students. He is based in Toronto.