Northland Properties has acquired the soon-to-be-completed King Blue Hotel in Toronto from Greenl... 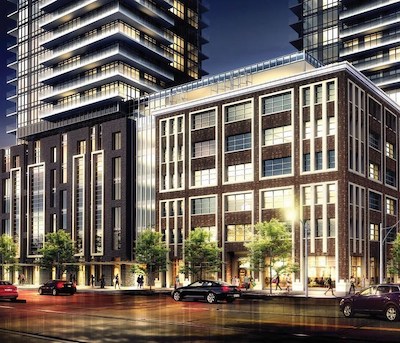 A rendering of the downtown Toronto King Blue Hotel, in the podium of the twin-tower King Blue Condominiums development. (Courtesy Northland Properties)

Northland Properties has acquired the soon-to-be-completed King Blue Hotel in Toronto from Greenland Canada, which is developing the 118-suite boutique facility as part of its twin-tower King Blue Condominiums.

Located at the corner of King St. West and Blue Jays Way in the downtown core, the King Blue development comprises 48- and 44-storey towers connected by a six-storey podium constructed from the remains of the historic Westinghouse manufacturing plant which was built in 1927.

Financial details of the transaction were not released.

“Northland’s acquisition of the King Blue Hotel is a great addition to our family-owned portfolio of hotels, restaurants, resorts and sports assets,” said Tom Gaglardi, CEO of the family-owned Northland Properties Corp., in the announcement.

“With an existing collection of 60 hotels across five countries, this impressively constructed hotel serves as a landmark expansion at an important address in Toronto’s Entertainment District.”

Northland is an international hotel/resort and entertainment owner which is active in five countries, employs about 13,000 and owns 63 properties as well as operating 175 restaurants and venues.

The company is also the owner of the Dallas Stars NHL franchise.

The upscale, contemporary-modern boutique hotel is near completion and slated to open later this fall.

“We are pleased to have completed the final stage of this exciting development and wish Northland much success with the hotel,” said Henry Cao, general manager of Greenland Group Canada, in the release.

“It is a special location in such a culturally dynamic city and the hotel will be a great addition to the Toronto market for both business and leisure guests.

“Greenland is proud for its first project in Canada to be recognized by a market leader like Northland Properties. We hope to continue to develop and deliver more properties in Canada.”

Located in the podium area of the development, the hotel includes an upcoming premium onsite restaurant, meeting and social spaces, and modern, fully equipped recreational facilities.

About Northland and Greenland

Vancouver-headquartered Northland Properties is a family-operated Canadian hotel and entertainment investor and operator formed in 1963. It has assets across Canada, the U.K., Ireland and the U.S.A.

Since its founding in 1992, Greenland Holding Group Co., has established a diversified structure through both industrial and capital operations, with a focus on real estate.

Greenland Group is also active in other industries including finance, infrastructure construction, international trading and energy resources. Greenland Group placed No. 142 on the 2021 Fortune Global 500 list.