Nicola Wealth Real Estate (NWRE) forecasts it will make 80 to 90 acquisitions valued at between $... 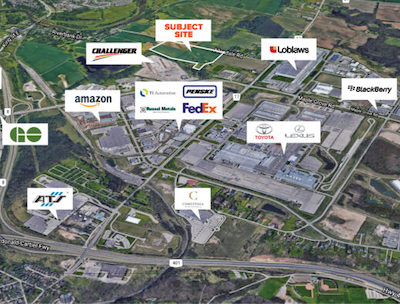 This industrial property in Cambridge, just west of Toronto, will be developed by Nicola Wealth Real Estate and its JV partners First Gulf and Challenger Motor Freight. (Courtesy Nicola Wealth RE)

Nicola Wealth Real Estate (NWRE) forecasts it will make 80 to 90 acquisitions valued at between $1.5 billion and $2 billion in 2021, with an emphasis placed in the industrial sector, making it its busiest year ever.

The in-house real estate team of Nicola Wealth, a Vancouver-headquartered financial planning and investment firm with $10 billion of assets under management, has partnered with First Gulf on several projects in the Greater Toronto and Hamilton Area.

– an office development at 1335 North Service Rd. E. in Oakville;

– an industrial development property at 2485 Speers Rd. in Oakville;

– and a nine-property, 473,000-square-foot industrial portfolio in Hamilton, Burlington and Stoney Creek.

The latest partnership between NWRE and First Gulf — which has developed and built more than 30 million square feet of office, retail and industrial assets worth more than $4 billion since its inception in 1987 — continued with the acquisition of a 52-acre property on Allendale Road between Riverbank Drive and Highway 17 in Cambridge that offers quick access to Highway 401.

Challenger Motor Freight owned the virgin land but required equity partners and additional expertise to further develop it. Broker Lee & Associates introduced the company to First Gulf, which in turn brought in NWRE as an equity partner.

NWRE managing director Mark Hannah told RENX his firm owns a 75 per cent stake, while First Gulf and Challenger own the remaining interests.

“That could change if you get a user that comes along and wants a bigger building, then maybe you go for a different layout,” said Hannah. “But, we’re trying to lay out the site in a way that will attract your typical industrial users. We have two phases with two buildings in each phase.”

Hannah would like to see construction of the first phase begin early next year, conditional upon receiving approvals.

The property is comprised of approximately 200,000 square feet of class-A warehouse space in two buildings of 100,000 square feet and is completely leased. They include 28-foot clear heights and ample loading space.

Half of the space will become available in the spring, at which time it will undergo a revamp and then be re-leased to take advantage of the surge in demand for quality mid- to large-bay warehousing space in Calgary.

“The other building has tenants with leases that will roll over in the next number of years,” said Hannah. “It will be an opportunity for us to upgrade the building and, over time, we would look to sell that property.”

Industrial properties in Calgary and Edmonton have received renewed interest from private and institutional investors of late because of the demand for space, according to Hannah.

“We’re fine going into Calgary. We already have industrial assets there and we’re comfortable and they’re performing very well. So when this opportunity came along to partner with Anthem, we liked it. It’s a very attractive asset that’s easy to lease.”

NWRE and Blackwood have partnered on a 35-acre site at Kelson Avenue and South Service Road in Grimsby, Ont. that fronts the Queen Elizabeth Way (QEW). There are plans to build 750,000 square feet of distribution space in two buildings that can be leased to a single user or multiple tenants.

“We think this is going to be in very high demand by users that want to be in that location,” said Hannah.

NWRE and Northbridge are partners on a recently acquired 16-acre site on York Mills Road in Toronto which Hannah said has development options. Some industrial users are interested in a large portion of the site for distribution space.

A portion could also be used for a small food-anchored retail centre or small-bay industrial condominium units.

“Depending on what makes the most sense will determine how we develop the project,” said Hannah. “But because of the prime location we’re going to have lots of good options to consider.”

NWRE and First Gulf acquired the 27.5-acre site at 2485 Speers Rd. in March from Mancor Industries and negotiated a 10-year sale leaseback deal with the metal component manufacturer for an existing 52-year-old, 77,000-square-foot building. The residual land is to be used for 350,000 square feet of new industrial facilities.

A sale leaseback deal was also struck with Mancor for a 38-year-old, 87,000-square-foot industrial plant on an 8.1-acre site at 2491 Royal Windsor Dr. in Oakville.

“At the end of the term, assuming Mancor leaves, we already have plans to build new generation on that site,” said Hannah. “We also bought a piece on the corner that came with that site where we’re talking to the city about developing a new self-storage facility.”

NWRE bought a 20.84-acre property at 601-607 Milner Ave. this year that has an existing 45-year-old 439,667-square-foot, two-storey building on it. It’s in the approvals process to build up to 350,000 square feet of distribution space on the site and has asked First Gulf to help with design and construction.

The buildings in the Hamilton, Burlington and Stoney Creek portfolio acquired in March, which also offer easy access to the QEW, are nearly 100 per cent leased. The portfolio is seen as an opportunity to increase revenue through capital investment and market repositioning.

NWRE and other asset classes

NWRE has properties in Victoria, Vancouver, Calgary, Edmonton, Winnipeg and Toronto, and is looking into acquisitions in Montreal and Ottawa. It’s involved with the purpose-built rental apartment, office, retail, seniors independent living and self-storage sectors.

“There has been a push on industrial, and now self-storage, as well as multifamily because those three asset classes have weathered the storm during COVID and performed exceptionally well,” said Hannah. “We want to continue to add those, but we’re not going to ignore the other asset classes.

“We’re diversified and we’re going to continue to be that, but there’s no question that there has been a concentrated push to those three asset classes.”

Most of NWRE’s capital comes from high-net-worth families, though it also has some institutional investment in its three open-ended funds.

Don Wilcox Commercial Transactions Ontario Jul. 27 2021
Steve McLean Business reporter
Steve is a veteran writer, reporter, editor and communications specialist whose work has appeared in a wide variety of print and online outlets. He’s the author of the book Hot Canadian Bands and has taught reporting to college students. He is based in Toronto.