Nicola Wealth Real Estate has continued to push ahead with its aggressive expansion into the Grea... 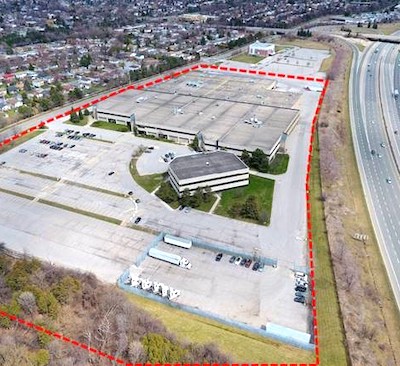 Nicola Wealth Real Estate has acquired this 21-ace industrial site in East Toronto. It plans to demolish the existing structures and build a new warehouse of about 350,000 square feet. (Courtesy NWRE)

Nicola Wealth Real Estate has continued to push ahead with its aggressive expansion into the Greater Toronto Area industrial market with the acquisition of a 21-acre East Toronto property on which it plans to build a new state-of-the-art facility.

“Ontario is a key market,” director of acquisitions Ron Bastin told RENX in an interview about the most recent addition to its Canadian income fund.

“The existing facility is about 430,000 feet, so the plan is to demo the building, scrape the site and build a new generation 350,000-square-foot, approximately, warehouse distribution facility.”

While the planned new facility might be smaller in overall square footage, Bastin said that is because a portion of the existing structure is two storeys. He said there is no firm design for the new building at this point, because Nicola Wealth (NWRE) is exploring its options.

The property is soon to be vacated.

“We’re working through that right now. Nothing is set in stone. It depends on the opportunities that present themselves to us,” he said. “We’re on spec right now.”

In a market where industrial vacancy runs at about one per cent, and with a location along the Highway 401 corridor, Bastin believes this could be a great asset for the fund.

“For us, it was an extremely rare opportunity to acquire this 21 acres and an exciting opportunity for what we can do with it.”

The acquisition is the latest for Vancouver-based NWRE since it made its initial move into Ontario about a year ago and hired Bastin as – so far – its lone GTA-based executive.

Bastin has over 20 years of industry experience, much of it in increasingly senior roles at Bentall Kennedy (now BentallGreenOak). He also spent four years as senior vice-president at Scotia Institutional Real Estate Inc. before moving to NWRE. 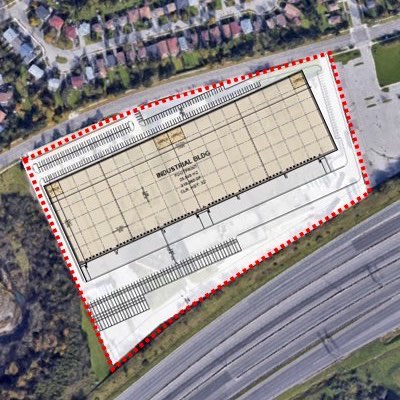 A preliminary plan for the facility to be constructed at Nicola Wealth Real Estate’s East Toronto property. (Courtesy NWRE)

Despite the amount of competition for industrial assets in the GTA and throughout Southern Ontario, and Nicola Wealth’s relative newcomer status to the region, Bastin said he’s seeing plenty of opportunities cross his desk.

“We are expanding at what I’d say is a good, controlled pace.”

It has also partnered with First Gulf on an industrial development which is just wrapping up at 880 Avonhead Rd. in Mississauga and 50 acres of industrial land at 10538 Coleraine Dr. in Brampton.

Bastin said NWRE continues to seek other industrial assets and hopes to make more announcements in the coming months. It’s willing to consider both existing assets and development properties.

“It really depends on the opportunity itself and the underlying characteristics and fundamentals,” Bastin said, “what we think we can do with that opportunity. We will buy existing income, we will also buy development.

“For us, the strategy really is buy or build core assets with strong cash flow that we can hold over the long term as it pertains to our income fund.”

NWRE is the in-house real estate team of Nicola Wealth, a Vancouver-based financial planning and investment firm with $9.2 billion of assets under management.

With the acquisition of Blackwood Partners to help with its Eastern expansion, the current real estate portfolio exceeds $6 billion gross asset value.

EDITOR’S NOTE: This article has been updated to correct the identity of NWRE’s partner (First Gulf) in the recent acquisition of a portfolio in Oakville, Hamilton, Stoney Creek and Burlington. RENX apologizes for the error.