The Calgary-based Ocgrow Group of Companies has formed an alliance with Amazon to deliver what it...

The SOLA condo development in Calgary will be the first in Canada to be fully Alexa-enabled right from the design stage, as a result of an alliance between Ocgrow Group and Amazon. (Courtesy Ocgrow Group)

The Calgary-based Ocgrow Group of Companies has formed an alliance with Amazon to deliver what it says is the future of condo living in Canada with the launch of the SOLA project in inner-city Calgary.

The development, with 172 luxury smart homes, will be fully Alexa-enabled, offering new owners access to a variety of intelligent cloud-based voice services.

“We are so excited to form this long-term, strategic alliance with Amazon and its incredible Alexa group of devices, which shall continue to accelerate growth for Ocgrow Group, while providing the future of smart condo living to Canadian residents in 2020 and beyond,” Harish Consul, president and CEO of Ocgrow Group, told RENX in an interview.

“This is a very powerful new offering and we’re thrilled Amazon has such an incredible host of services offered through its Alexa division, for all new SOLA owners to enjoy.

“It’s a luxury residence tower. It will be Canada’s most tech-innovative building. There’s been very little innovation done in my opinion in the real estate world frankly. The same door handle. The same switches. For the last 20, 30 years. . . . We’re going to change all that.

“It’s the highest-speed internet in Alberta for any new building. We have gigabit ethernet going into every unit. We have smart hubs built into every single unit.

Consul said the partnership is the first such venture for Amazon in Canada. He said it’s a result of a 25-year relationship he has had with Amazon, since he sold a company to the e-commerce and tech giant back in the 1990s.

“Every single unit will be voice-enabled with Alexa,” he said. “It’s a very exciting project. We think Calgary is ready for a project like this. It’s a young, entrepreneurial city.

“We’re bringing a lot of tech into Calgary. We think that’s where the future is here. All of our buildings will be with Amazon, Alexa-enabled, and SOLA is the first building of its kind in Canada.”

SOLA will be a nine-storey tower located just outside of Calgary’s downtown core along 14th Street N.W., between Kensington Road and 2nd Avenue on the west side, and near the trendy pedestrian-friendly Kensington neighbourhood.

SOLA has been a five-year project so far and it recently launched sales.

The luxury condo units will be above a commercial retail podium. Ocgrow will retain ownership of the podium, which is expected to include community-based retail such as a coffee shop, medical uses, a hair salon and a liquor store.

“It will be a mix of high-end retail tenants that we will be announcing,” he added.

Consul said SOLA is the first of several Ocgrow projects to be launched in Canada with a smart home hub built into every unit. 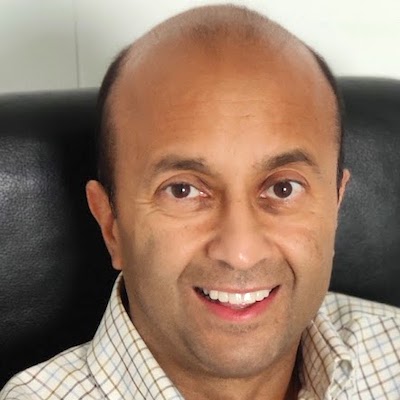 Harish Consul is the president and CEO of Ocgrow Group of Companies. (Courtesy Ocgrow Group)

Ocgrow’s venture capital group is focused on the early-stage technology sector, healthcare and other new growth venture investments. It has offices in Calgary and Vancouver.

Recently, the company completed its River Heights Place commercial/retail centre in Cochrane, Alta., which is almost fully leased. Consul said the firm has also led several multifamily/mixed-use projects in Vancouver over the past 30 years.

On the venture capital side, he said the company has been heavily involved in the tech sector for over 25 years, and he’s founded/sold several tech companies during this period as well.

“We believe in the Generation Z-type focus. It’s a young demographic that we’re targeting and an investor demographic. We believe that this is the future of luxury condo living. Everybody wants these tech features, especially young demographics, and we think there’s no better area than trendy Kensington,” said Consul.

“All of the development in Calgary’s history frankly in the last 50 years – and I grew up in Calgary – it’s been 10th Street and there’s been nothing on 14th Street. And 14th is actually a better corridor. It’s closer to the university and SAIT.

“We think there’s a lot of merits to redeveloping 14th Street and trendy Kensington is the best area for a young demographic with all the tech. Everybody requires these services and I think at five, 10 years every single unit will have the same services built in.”

Consul said if some people are wondering why he’s launching a high-end condo development in a very tough economy, it’s all about timing.

“In the last couple of years, every major developer has converted condo to rental,” he said. “They’re turning toward rental. It’s a two-and-a-half year build.

“I think the inventory will continue to decline on the condo-for-sale market. So I think we’re in a great position launching at this phase, for completion the end of 2022.”

In a statement, Mary Moran, president and CEO of Calgary Economic Development said: “The marriage between advanced technologies and traditional industry is at the cornerstone of the vision for our community and today’s announcement is one more proof point of our strategy in action.

“We are very proud of the team at Ocgrow and their accomplishments to date and know that not only will this project bring vibrancy to the community of Kensington, but will act as a beacon for the continued growth and diversity of our economy.”

Steve McLean Residential Market Trends National Sep. 18 2020
M
Mario Toneguzzi Business reporter
Mario Toneguzzi, based in Calgary has 37 years of experience as a daily newspaper writer, columnist and editor. He worked for 35 years at the Calgary Herald covering sports, crime, politics, health, city and breaking news, and business. For 12 years as a business writer, his main beats were commercial and residential real estate, retail, small business and general economic news. He nows works on his own as a freelance writer and consultant in communications and media relations/training.