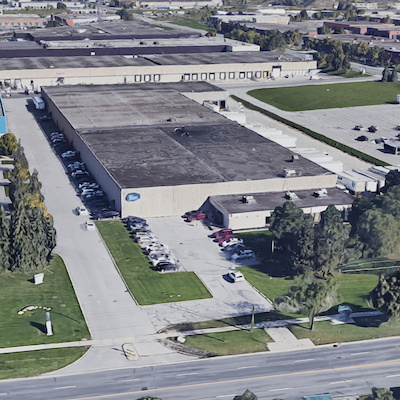 This industrial property at 5600 Finch Ave. E. in Toronto is being acquired by Parkit Enterprises, as it shifts focus from parking facilities to include industrial assets. (Google Maps)

Parkit Enterprise (PKT-X) is expanding its business model from parking facilities to also become an owner of industrial properties and adding considerable new experience and heft to its board of directors. The announcement coincides with Parkit’s first industrial acquisitions in the GTA – agreements to buy two class-A properties for $36.25 million.

In conjunction with the move, there will be a major change to its board of directors. It will welcome four senior executives, including Timbercreek Asset Management co-founder/CEO Blair Tamblyn and StorageVault Canada Inc. (SVI-X) CEO Steven Scott, who is proposed to become the Parkit board chair.

“Steve has been focused on industrial for a long time,” interim CEO Avi Geller told RENX in discussing the shift in strategy. “I am an opportunistic investor. I’m always looking to come into a situation where I think I’m getting in at a good time, at a good price.

“Industrial is something we have been following and through one of our directors we were introduced to Steve. We thought it was a great partnership, an opportunity to get involved with a fantastic operator in an asset class we think has a lot of tailwinds. So we jumped on it.”

The two industrial properties comprise about 230,000 square feet; a manufacturing facility at 5600 Finch Ave. E. in Toronto; and a multi-tenant light industrial/commercial facility at 4390 Paletta Crt. in nearby Burlington, west of Toronto. Both are fully occupied, with the average remaining lease terms at 4.8 years.

Geller said Parkit will not abandon parking – it owns and operates five properties in the U.S. However, he noted such assets are difficult to acquire and pricey despite the current pandemic. The move into more traditional industrial sectors offers a more immediate opportunity for growth.

“We still believe in parking, we still will do parking investments, we like our assets that we currently have,” Geller said. “We are hopeful that this will maybe shake out some of the weaker operators and there will be some buying opportunities.”

Scott’s involvement brings the sizeable resources and expertise of StorageVault into the mix.

“Through our discussions, we felt industrial there is a real opportunity in Canada particularly,” Scott explained. “The two top industrial public assets were PIRET and CREIT.

“PIRET was taken private by Blackstone over the last couple of years and Choice bought CREIT. Granite is a great company but only 17 per cent, I think, of their assets are in Canada and they are very Magna-centric.

“WPT is another very high-end, high-quality company but I think they have zero assets in Canada. So there just wasn’t a lot of choice in the public market space for what we consider one of the top assets especially the last five years and through COVID.

“We just think there is a great opportunity following along the StorageVault model for acquisitions in the industrial space.”

Both acquisitions were sourced off-market and will be acquired from entities in which Scott has a business relationship.

They plan to expand their holdings through more off-market acquisitions.

“We already have a group of targeted assets that we are going to approach the owners on. We don’t go combing through the listings, the agents’ listings. We go and target buildings that we think fit our strategy and structure. Then we go and approach the owner with what we think is a unique and creative solution, very much like we’ve done in the self-storage business.

“We haven’t bought anything that’s been listed for sale in 20 years, it’s all been direct-drive.”

He said the “greatest opportunity” for such acquisitions is in the GTA and surrounding areas, though Parkit also likes the Montreal and Ottawa markets. One focus will be long-time owners who are now facing potential tax and estate planning implications.

“There are a number of people who have a building, where they bought it for a pretty low value 20 or 30 years ago, that’s a great piece of real estate, and they are seeing rents escalate, but they are worried about capital gains exclusion rates, and they are trying to do some estate and tax planning,” he explained.

The new board members will bring significant additional experience and expertise in the industrial sector, and financing, to the mix.

StorageVault CFO and director Iqbal Khan will also join what will be an eight-member board, along with Tamblyn and managing director, global credit Julie Neault of Timbercreek.

“When Avi and I got involved in this three years ago, we saw something that was really cheap from an asset-value basis and we got involved” said Delaney.

“We kind of knew from the get-go that we were sitting on a call option. When we were introduced to Steve by Brad, who is also on the board, it just seemed like a fantastic opportunity and it was exactly what we were hoping for.”

The firm says “current insiders and shareholders, and their affiliates, of Parkit” will purchase $2.5 million worth of the placement.

Access Results Management Services Inc., is to become the manager of the properties under a five-year contract.