Phantom Developments might not have a high profile, but the family-owned Toronto company is doing... 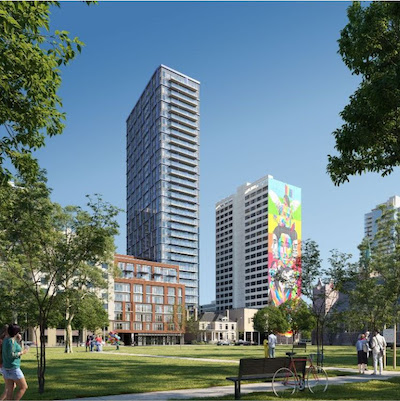 Phantom Developments might not have a high profile, but the family-owned Toronto company is doing its part to redraw portions of the city’s skyline with its high-rise condo developments.

The company was founded by the father of Phantom principal Henry Strasser more than 50 years ago. Its origins are in a successful apparel company which first spun off S&A Developments and then Phantom, as housing grew in importance over hosiery.

“We try to do one project every year,” Strasser said. “We always have four or five projects in the pipeline that we’re either putting offers in for purchase, or we’ve tied up.”

Phantom partnered with Great Gulf on 8 Cumberland, comprised of a 51-storey condo tower atop a three-storey podium. It’s located on a narrow site on the corner of Yonge and Cumberland Streets in the upscale Yorkville neighbourhood.

“Anything that’s more complicated to build, like narrow sites, we generally do a partnership with an entity that has a construction arm,” said Strasser, noting Phantom usually goes it alone when developing condo projects of under 400 units.

Eighty per cent of 8 Cumberland’s suites sold in six days, with the remainder being held back, according to Strasser. Those remaining units, aside from some penthouse suites, will go on sale in September.

“We have approximately 400 units there,” said Strasser. “We did have less, but we made some units smaller in the last year; those we’ve held back. We thought they were a little too big so we made them smaller.”

The architectsAlliance-designed building features one- and two-bedroom suites and two floors of indoor and outdoor amenities.

These include: a plunge pool; an outdoor terrace with a barbecue lounge; a fitness lounge; and a pet park. The podium will feature a retail element and will be made up of restored heritage facades of century-old Victorian brick.

The underground parking levels have been completed and construction is almost at grade.

The latest project from Phantom is a 50/50 partnership with Graywood Developments on the 34-storey, 489-unit JAC Condos on the site of a former heritage home at 314 Jarvis St.

Phantom purchased the site in June 2018 and started looking for a development partner. Graywood was approached and a deal was reached in a month, according to Strasser.

“They’re very good and have a construction arm, and our expertise is more on the sales, marketing and development side,” he said.

The location at Jarvis and Carlton Streets, across from the five-acre Allan Gardens park, is close to shopping, restaurants, entertainment, hospitals, Ryerson University and the financial core.

JAC Condos will feature a wide range of suite sizes, starting with 340-square-foot studios and growing incrementally to three-bedroom-and-den units of more than 800 square feet.

There will also be five townhouses of approximately 1,300 square feet priced at around $1.5 million.

Despite a fire late last year, the facade of the original 1902 Beaux Arts heritage house on the site was saved and will be integrated into a recreation of the original structure. It will merge with a new podium and tower designed by Turner Fleischer.

The new-build podium will be clad in brick and feature the building lobby, complete with an outdoor courtyard, fireside lounge and a gallery space. The restored heritage house will feature the original north and east sides, with the rest being rebuilt.

The house will feature amenities including: a technology lounge; a coffee bar; a library; flex spaces for working and learning; a serenity room; a yoga studio; a gaming and movie room; a bar; a multi-purpose room; and an arts and crafts studio.

A private laneway behind the house will feature dedicated bicycle parking and direct access to the building.

Strasser said JAC Condos sales were opened early to the brokerage community and “family and friends.”

Ideally he’d like to see a brisk initial 75 per cent sell-through, allowing construction to start next March or April, with occupancy in early 2024.

Whitby townhomes and adding to the pipeline

Phantom also owns a site at Sebastian Street and Taunton Road in Whitby, Ont., where it plans to launch sales for an 80-townhome development within the year.

The company uses its own money and bank financing to fund its acquisitions and developments.

While it hasn’t closed on any new acquisitions, Strasser said Phantom is very interested in two sites on Sheppard: one between Bathurst and Yonge; and the other near Bayview Avenue.

Phantom is also looking at downtown Toronto sites appropriate for condos with about 250 units.

S&A Developments owns a commercial and industrial portfolio of more than two million square feet of leased space that it’s built up over the years. Much of it is in suburban Richmond Hill, just north of Toronto.

S&A has owned 16 acres of raw land at East Beaver Creek Road and Highway 7 in nearby Markham for several years.

Strasser said its future development involves a 10-year plan with potentially multiple uses, including a hotel, industrial, commercial and retail.

Steve McLean Residential Development Toronto / GTA Sep. 1 2020
Steve McLean Business reporter
Steve is a veteran writer, reporter, editor and communications specialist whose work has appeared in a wide variety of print and online outlets. He’s the author of the book Hot Canadian Bands and has taught reporting to college students. He is based in Toronto.