The redevelopment of a property in East Toronto is the latest result of Pure Industrial Real Esta... 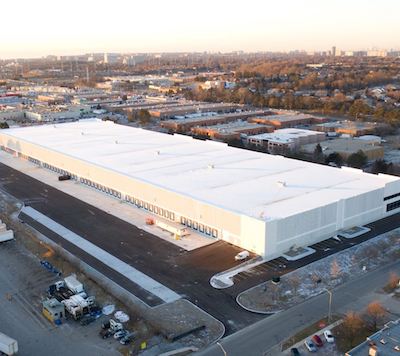 The redevelopment of a property in East Toronto is the latest result of Pure Industrial Real Estate Trust‘s (PIRET) strong focus on its three primary markets, Vancouver, Montreal and the Greater Toronto Area.

PIRET acquired the 14.82-acre site and existing 150,000-square-foot DuPont manufacturing plant in July 2017 for $16.1 million in cash. It leased the facility back to DuPont through January 2018, before demolishing the building and enlisting Hopewell Development to redevelop the site on a speculative basis.

There’s now a 295,087-square-foot facility with 36-foot clear heights at 75 Venture Dr., near the northeast corner of Morningside Avenue and Sheppard Avenue East.

PIRET liked the location for several reasons: access to public transit; an available local labour force and warehouse wages lower than some other Greater Toronto Area (GTA) submarkets; and a lack of quality competing industrial buildings in the area.

No pre-leasing for 75 Venture Dr.

“The acquisition price with the existing building, plus demolition, is lower than what the land is trading at today on a stand-alone basis,” PIRET chief operating officer David Owen told RENX. “It was our decision not to pre-lease it mainly because of the way the market has been moving.”

Now that the building is up and running, Avison Young has been brought on board to target logistics, e-commerce and warehouse users.

While PIRET is open to single or multiple tenants at 75 Venture Dr., the preference is to lease it all to one company.

“We really don’t see a discount on rent for a single tenant versus a multi,” said Owen. “We’re patient enough to know that there’s probably demand on a larger scale, given the lack of big-box space in Scarborough.”

In other recent developments PIRET purchased an 11-property, 1.5-million-square-foot portfolio of warehouses, distribution centres and logistics buildings in the Greater Montreal Area from Healthcare of Ontario Pension Plan (HOOPP) for $249 million last September. Owen said the integration of those properties has been going well.

“Given the lack of availability and given the lack of speculative construction and supply, a class-A portfolio like HOOPP’s really positions itself to attract large-bay major distributors. That’s why we targeted it and paid what we paid, and why it’s so exciting for us.”

The properties are well-located, with the majority on the island of Montreal, and were largely built in the early 2000s. All of the buildings have 28-foot-plus clear heights and some have heating- ventilation- and air-conditioning-controlled interiors.

Availability of industrial properties is at an all-time low in Montreal, but rents haven’t yet seen a significant spike. Owen views Montreal as being earlier in its cycle than Toronto and Vancouver, but sees parallels between the three markets.

CBRE was enlisted to assist with leasing the portfolio.

“Leasing has been going well,” said Owen. “We don’t have a lot of interim rollover but, with the ones that have rolled, there’s been positive momentum.

“Given that the market is still in early innings, there’s always a pause for tenants, but we’re going to stick to our strategy. We really believe in the real estate.”

PIRET’s move out of Alberta

It included 37 single- and multi-tenant light industrial properties (22 in Edmonton, 14 in Calgary and one in Grand Prairie) and a 12,649-square-foot parcel of leased land in Edmonton.

“That was in line with our broader strategy of targeting infill, highly land-constrained cities in Canada, which is really Toronto, Montreal and Vancouver,” said Owen. “In Vancouver it’s difficult to find opportunities due to the size of the market. But, Montreal is certainly a focus and Toronto will always be a focus of ours just because of how large it is.

“The majority of opportunities that we see across our desks, being located downtown, are in Toronto.”

“Our internal leasing presence really helps to facilitate that among the industrial brokers in the communities that we actively participate in. As we continue to expand those relationships, opportunities breed other opportunities.

“That’s really important for us and we can’t thank our key brokers enough for that.”

PIRET had a portfolio of 159 properties encompassing 27.2 million square feet at the end of 2019.

An affiliate of Blackstone Property Partners partnered with Caisse de dépôt et placement du Québec subsidiary Ivanhoé Cambridge to acquired the formerly publicly traded PIRET for about $3.9 billion in May 2018.

Blackstone and Ivanhoé Cambridge own 62 per cent and 38 per cent, respectively, of PIRET.

Owen said PIRET has made more than $1 billion in acquisitions in Toronto, Montreal and Vancouver since going private and has probably been Canada’s largest industrial property purchaser over that time.

“They’re extremely knowledgeable about industrial warehouse space and are one of the largest owners in the world,” Owen said of Blackstone, which is active in North America, Europe, Asia and Australia.

“We’re going to continue to execute on our business plan to be a rent leader, but also to hopefully be viewed as a top-tier landlord.

“Going from public to private really allows us to be more flexible with our capital. As a public REIT, we were really focused on occupancy and AFFO growth, which really meant minimizing your capital spend.”

Owen said PIRET is now looking at things from a total return perspective. It is spending “significant amounts of capital” on its buildings and customer service to attract quality tenants and keep them happy, while also getting the best rents possible.

The move from public to private ownership has also made development a higher priority for PIRET. It has an active development pipeline worth more than $500 million.

“That’s really a function of our knowledge of land costs and construction costs and where we want to be within our core markets,” said Owen. “We don’t have in-house construction or development, so we really rely on our partners and on brokers to bring us opportunities.”

PIRET just finished developing a 107,590-square-foot warehouse with a 32-foot clear height at 980 Thornton Rd. in Oshawa, just east of Toronto. CBRE has already leased 21,518 square feet of the building.

PIRET owns a 20-acre site in Vancouver and another site at 260 Eighth St. in the Toronto suburb of Etobicoke that will be developed further down the road.

“We’re actively looking at other stuff in the GTA right now,” said Owen. “The development pipeline is strong.

“Our core focus is always going to be existing buildings in infill markets, but if we can acquire land at a reasonable price and we feel we can substantially increase rents, we’re going to execute.”