Pure Industrial has acquired a 28-acre parcel of land along Hurontario Street in the Greater Toro... 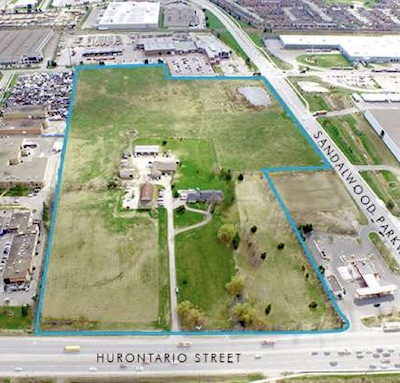 Pure Industrial has acquired a 28-acre parcel of land along Hurontario Street in the Greater Toronto Area city of Brampton where it intends to construct two industrial buildings totalling about 625,000 square feet.

“We are pleased to be able to convert this site, which has been vacant for decades, into a hub of commerce and job-creating activity at one of Brampton’s most important intersections,” said David Owen, Pure’s chief operating officer, in the announcement. “We will continue to work closely with the City of Brampton and surrounding community to ensure the site is a positive addition to the area, especially from an aesthetic and environmental standpoint.”

The intention is to construct facilities focused on the logistics, distribution and transportation sectors. The development is still subject to approvals from the city, but Pure says it has received preliminary support from Brampton council.

A spokesman for Pure Industrial declined a RENX request for an interview on the transaction and project.

About the Brampton property, project

The property is at the intersection of Hurontario Street and Sandalwood Parkway, one of the busiest corridors in the city and an area which is already developed as an industrial and logistics hub.

The site’s zoning allows for a wide range of uses including logistics, office, transportation, advanced manufacturing and distribution facilities, while also providing outside storage capabilities.

The location provides access to an abundant labour pool and several major highways, as well as to Brampton’s Züm bus transit and GO Train service.

Pure is already heavily invested in the Brampton area, owning and managing 15 buildings and over 2.5 million square feet that houses nearly 30 tenants. It owns another property across the road on Sandalwood, a 764,000-square-foot warehouse which is fully leased to a food manufacturer.

“Pure has deep roots in Brampton,” said Charlie Deeks, the chief investment officer at Pure, in the announcement. “The city has an abundant and skilled workforce and a business-friendly mentality that helps our company grow and play a critical part in the Canadian supply chain.

“We are proud to be able to offer integrated, full-service solutions in strategic locations across Canada for our customers – from the first to the last mile.”

The firm has also been actively developing in the Greater Toronto Area, which has an industrial vacancy rate of just 1.7 per cent according to JLL’s most recent stats for Q1 2021. That rate has been under two per cent for 10 consecutive quarters and has sparked a rush to acquire and build.

Pure’s most recent project in the GTA was the completion of a 295,000-square-foot logistics facility at 75 Venture Dr. in Scarborough, in the east end of the region. That project involved demolishing an existing 150,000-square-foot manufacturing plant and building a modern facility with 36-foot clear heights.

In this case, while the property does have some existing buildings, it is largely undeveloped.

Pure has retained Hopewell Development as development manager for the Brampton site. The two groups have a long-standing history, having worked together on other developments across Canada — including 75 Venture Dr.

“We’re excited to be building once again with Pure Industrial and continue to expand on our partnership,” said Murray DeGirolamo, president at Hopewell, in the release. “We are enthusiastic about the project and it is a great opportunity for us both to contribute jobs and opportunities to the City of Brampton.”

Pure Industrial is one of Canada’s leading providers of industrial real estate, owning and managing over 21 million square feet concentrated in the Toronto, Montreal and Vancouver metro areas.

Pure is owned by funds affiliated with Blackstone Real Estate and Ivanhoé Cambridge.