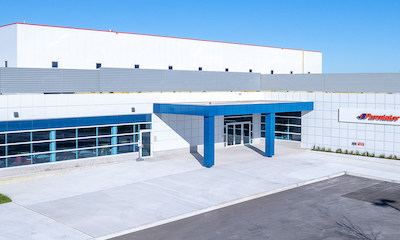 Purolator has officially opened its state-of-the-art 443,084-square-foot national hub in Toronto, the first of two huge new package sorting facilities which have been under construction in the city by the company and its majority owner, Canada Post Corp.

Canada Post had also unveiled the name and plans for its own new facility in Toronto in May. The 585,000-square-foot Albert Jackson Processing Facility is located at 1395 Tapscott Rd. in Scarborough, and is to open in early 2023.

In total, the two facilities comprise over a million square feet of space and represent an investment of about $800 million. The Purolator facility cost $330 million, the Canada Post centre is to cost $470 million.

“Following the sharp rise in e-commerce and two years of unprecedented growth, the new state-of-the-art national hub is opening at a crucial time,” said John Ferguson, president and CEO of Purolator, in the announcement on Tuesday. “Pivoting off our history of innovation, our investment in this infrastructure and new technology is a game-changer.

“It provides greater flexibility to quickly move goods across the country to enable businesses and services in all sectors of the economy to thrive.”

The facility, which broke ground in May 2020 shortly after the onset of the COVID-19 pandemic, is the “centrepiece” of a five-year growth strategy for Purolator. It is more than double the size of Purolator’s largest existing facility.

Located at 325 Humber College Blvd., the national hub offers nearby access to several major thoroughfares including Hwys. 401, 407, 427 and 27, as well as being located just a few kilometres from Toronto’s Pearson airport.

It offers triple the capacity of Purolator’s former Ontario sortation facility, designed to process up to 70,000 parcels per hour at full capacity.

The hub includes technology which can unload a trailer in under 10 minutes (up to 12,000 parcels per hour) – 10 times the amount possible through manual efforts.

It also marks a shift from a standardized sortation model to a more tailored approach by which parcels are segmented by size, weight and dimensions.

“Innovation drives every business decision we make and this is especially true as we work to modernize Purolator’s extensive network,” Ferguson said in the release.

“We can now increase our responsiveness and dramatically scale up, or down, to meet the need for industry-specific solutions and the demand for time-sensitive express shipments.”

Purolator also says in the announcement it “integrated global industry best practices and technology, increased safety features, such as guard rails and sensors, and installed ergonomic equipment to reduce the risk of physical injury” for the approximately 1,000 people who staff the facility.

Amenities also include a multi-faith space, a 6,500-square-foot cafeteria and patio, a larger wellness room and a training centre double the size of the previous location.

According to data from Purolator, the firm has seen overall volume increase almost 15 per cent, with a 40 per cent increase in retail e-commerce. The firm expects to process over 1.5 million packages per day during its busiest week following Cyber Monday on Nov. 28.

The facility was constructed as a design-build project by Pomerleau.

While Canada Post and Purolator operate largely distinct shipping networks for their packages, both have been undergoing major modernizations of their facilities.

In the case of Canada Post, the Albert Jackson facility (named after the man believed to have been Canada’s first black letter carrier) is being constructed to be the corporation’s first net-zero carbon facility.

It is the largest industrial project in Canada being built under the Zero Carbon Building Standard designation.

At peak capacity, it will process over 60,000 packages per hour (more than a million per day), more than double the capacity of Canada Post’s current largest facility, Mississauga Gateway.

That means a package could arrive, be processed and ready for dispatch within four minutes, the corporation says.

The facility will process more than half of the parcel volume for the Greater Toronto Area.

Canada Post plans to increase overall parcel capacity by about 50 per cent by 2030.

Purolator Inc. is Canada’s leading integrated freight, package and logistics solutions provider. The company continues to expand its reach and services and reliability across Canada and globally.