While its findings don’t come as a surprise, Avison Young’s Q2 2022 Greater Toronto Area (GTA) in... 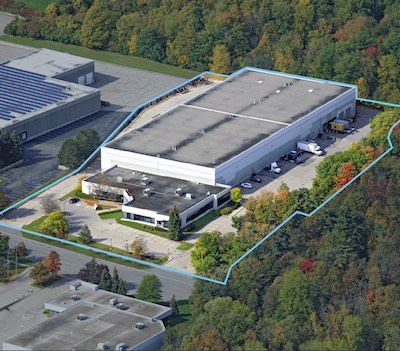 2140 Meadowpine in Mississauga is part of a portfolio of GTA industrial properties acquired by LaSalle Investment Management and an unnamed partner. Industrial vacancy in the GTA remains at record lows, just under one per cent. (Courtesy Lasalle)

High demand and limited supply continue to dominate, as the record low 0.9 per cent availability rate held steady despite the delivery of new buildings – because 84 per cent of that space was leased prior to completion. The availability rate has declined steadily from the first quarter of 2010 when it was 7.1 per cent.

Buildings under construction equate to 1.7 per cent of the GTA’s existing industrial stock, with 36 per cent being design-build projects and the remainder speculative developments.

Pre-construction developments total 50 million square feet in 143 buildings across the GTA. The GTA West market leads the way with 62 per cent of pre-construction opportunities, followed by 20 per cent in the North and nine per cent each in the Central and East markets.

Available space in the GTA Central market — comprised of East York, Etobicoke, North York, Scarborough and Toronto — increased by 10 basis points quarter-over-quarter to 0.9 per cent. It was down 50 basis points year-over-year.

Availability ranged from a high of 1.4 per cent in Toronto to a low of 0.5 per cent in North York.

The average asking net rental rate increased by $2.25 per square foot to $15.27 during the quarter. Toronto commands the highest rents at $16.67 per square foot and East York has the lowest at $14.74.

Prologis purchased 25 Bethridge Rd., with a 285,000-square-foot building on an 11.8-acre lot, for $49.5 million. It’s occupied by Shawcor, an energy and infrastructure company.

Five buildings totalling 955,100 square feet of completely leased space were completed during the quarter, including the aforementioned 1330 Martin Grove Rd. and Prologis’ 130,500-square-foot speculative building at 3825 McNicoll Ave. which has been occupied by DHL.

With strong demand for online grocery orders and few last-mile warehouse options in the core, Walmart Canada has repurposed 20,000 square feet in its store at 1900 Eglinton Ave. E. in Scarborough to accommodate a state-of-the-art fulfillment centre that will be able to process 1,200 online orders per day for customers in downtown Toronto.

The GTA East market — comprised of Ajax, Oshawa, Pickering and Whitby — saw its availability rate rise 40 basis points to 0.9 per cent while the average rental rate broke the $12 barrier for the first time, reaching $12.30 per square foot.

That’s still well below the GTA overall average of $15.09.

The other major occurrence in the market during the quarter was the Port of Oshawa receiving $14 million from the federal government and $16 million from The Hamilton-Oshawa Port Authority to support the expansion and modernization of its facilities.

The industrial availability rate in the GTA North market — comprised of Aurora, Markham, Newmarket, Richmond Hill and Vaughan — dropped 10 basis points to 0.5 per cent during the second quarter. The average asking net rental rate rose to $15.45 per square foot, led by Vaughan at $16.09.

Six buildings totalling 708,800 square feet were completed during the quarter, the largest a 287,300-square-foot building owned by Berkshire Axis at 11050 Woodbine Ave. in Markham that’s fully leased to GoBolt.

At the end of the quarter, 16 buildings totalling 3.4 million square feet were under construction. Sixty-five per cent of the space was pre-leased and 80 per cent of it was in Vaughan.

There were also 30 buildings at the pre-construction stage with the potential to add almost 10 million square feet to the market. Thirty-six per cent of that space has been leased prior to construction.

The industrial availability rate in the GTA West market — comprised of Brampton, Burlington, Caledon, Halton Hills, Milton, Mississauga and Oakville — increased by 10 basis points to 1.1 per cent during the quarter. Average asking net rents increased to $14.84 per square foot.

Seven buildings totalling 789,100 square feet were completed in the quarter and 57 per cent of the space was leased. The largest was a 278,100-square-foot warehouse owned by Moldenhauer at 759 Winston Churchill Blvd. in Mississauga.

There were 8.6 million square feet, 35 per cent of it leased, across 32 buildings under construction at the close of the quarter. That accounts for 57 per cent of the overall construction pipeline in the GTA.

Mississauga is responsible for the largest share of that space with 37 per cent, followed by Brampton with 29 per cent and Milton with 18 per cent.

Another 71 buildings totalling 31 million square feet are in the pre-construction phase.

Don Wilcox Commercial Transactions Greater Montreal Jul. 19 2022
Steve McLean Business reporter
Steve is a veteran writer, reporter, editor and communications specialist whose work has appeared in a wide variety of print and online outlets. He’s the author of the book Hot Canadian Bands and has taught reporting to college students. He is based in Toronto.