The type of urban industrial space needed for today’s economy is evolving and will continue to ch... 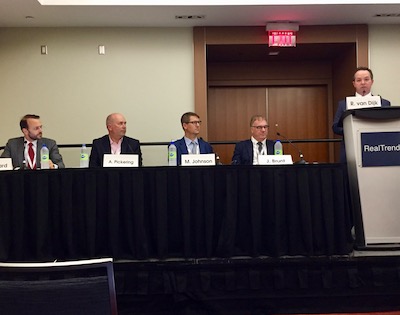 The type of urban industrial space needed for today’s economy is evolving and will continue to change in the years to come.

“It’s a rapidly changing world and we just have to make sure that we’re staying relevant with our real estate,” explained Oxford Properties Group industrial vice-president Alistair Pickering, during a discussion at the Sept. 17 RealTrends conference in Toronto.

van Dijk pointed out manufacturing accounted for about 20 per cent of Canada’s gross domestic product in 2003, but that number has now dropped by about 50 per cent. Today, distribution and logistics centres have become the dominant players in industrial real estate.

“Although there are very few pure-play e-tailers in existence, there are more and more tenants that are having a direct-to-customer component to their business,” said Pickering. “Food is becoming a bigger sector for us. It wasn’t very prevalent in our portfolio.”

What industrial tenants and developers want

While 28-foot clear heights used to be acceptable, some companies are now demanding 40 feet or higher.

However, KingSett Capital executive director of industrial investments Matthew Johnson said while clear height and the number of loading doors are still very important, technology such as automated racking and distribution systems are the most critical components for many tenants.

JLL vice-president Stephane Robillard said increasing online grocery sales have retailers seeking distribution centre locations close to urban areas with large populations to save on transportation costs and ensure quick deliveries. They’ll often pay well above the market rate to acquire them, and Robillard said this has disturbed the market.

However, Robillard believes the cost of acquiring land will be outweighed by savings in transportation costs within a few years.

Most of the available industrial space in the Greater Toronto Area (GTA) is under 50,000 square feet and isn’t suitable for those who need more space.

Acquiring pieces of land for larger industrial buildings can be difficult, especially in urban settings. Some companies try to assemble properties, but this process also has its risks since they’re often dealing with more than one vendor.

“As soon as you do the first deal, the second guy is going to want that plus 20 per cent,” said Johnson. “It becomes very difficult. And as you get into urban contexts, blocks become much smaller.”

Blaney McMurtry LLP partner John Brunt, a member of the law firm’s commercial leasing group, emphasized the importance for companies to find sites that can handle all of their needs both now and in the future.

“As technology changes, the needs for what people are going to want in their space will change. The ability to adapt is something they’re going to need as well. The last-mile aspect is probably the most costly.”

Brunt also pointed out multi-tenant, single-storey industrial buildings can present issues, including guaranteeing access for everyone. It makes administration more difficult and can cause traffic and truck-turning problems.

Johnson agreed, saying multi-storey industrial buildings bound to become more popular will also add complexity and have their own access issues. Strata and condominium ownership of industrial units within buildings can also complicate matters, he added.

Mixed-use, multi-storey industrial facilities with some office space have started to be built in Vancouver on a small scale. Most are being done with strata titles where businesses own the units to avoid rent increases.

Johnson believes the same thing will also happen in Toronto.

Pickering said Oxford has a well-developed design for a stacked distribution warehouse and is considering building a multi-storey industrial facility at a Burnaby site. A large owner-occupier component there, largely due to strata development, has pushed up land prices to between $3 million and $4 million per acre.

“I don’t think anyone’s going to pay a premium for being up on the second level,” said Pickering, who noted building multiple storeys costs twice as much to build on a per square foot basis compared to a conventional warehouse.

“The challenge for us as a land developer is to convince them that they’re not being disadvantaged by taking that space.”

Pickering said there’s just one large industrial property in the GTA with rents above $10 per square foot, but rents in the high teens will be needed to justify the construction of multi-storey industrial buildings.

“I think we’ll get there because land values are pushing up and the cost of operating those facilities is only a small piece of the tenant’s operating costs. The big costs are transportation. If you can get in the right location, you can save enough to pay the delta.

“What we haven’t really seen in this market is sufficient graduation of rental values from the core locations to the peripheral ones.”

Pickering thinks more sophisticated tenants are going to start believing it’s worth another few dollars per square foot to be in a location that’s closer to customers and employees.

Robillard said distance and ease of access can be a problem in getting people to work at farther-flung industrial facilities.

Pickering said there can also be an “Amazon effect,” where companies are afraid to locate near the online retail behemoth because they fear it will take their employees.

Oxford is looking to add more sophisticated industrial amenity spaces to attract employees. Pickering said these work better in master-planned industrial parks so they can incorporate some multi-use elements with a variety of services.

“Adding services such as daycares is important, but having the right labour in the right area is such a mismatch in Canada,” said Johnson. He thinks there’s a need for a better mix of housing and income types in suburban locations to attract people who are working in industrial facilities.

There’s a 1.5 per cent vacancy rate and 15 per cent annual rent increases in Toronto. Similar things are happening in other major Canadian markets, according to van Dijk.

“It doesn’t seem like we’re building enough,” he said.

There are limitations to what developers can do sometimes owing to zoning and planning rules.

“There’s enough land in Toronto,” said Pickering. “The barrier is getting it entitled and getting it through the planning process, which is desperately slow and isn’t keeping up.

“That’s ultimately what’s caused the bottleneck. It doesn’t mean we have to change policies, like moving the Greenbelt. There’s plenty of land that’s available. We just have to facilitate a faster process to bring that into production by getting it serviced and ready to go.

“There are plenty of developers who would build it. It’s a great market. I haven’t seen better conditions than this. We’d all be happy to deliver more product and deliver it immediately if we could.”

“Planning laws don’t keep up with developments in technology and the growth in new ideas that are coming along,” said Brunt. He noted many people are trying to do things to fit within current zoning bylaws so they don’t need approvals or changes and can act right away.

“Adding industrial to residential probably is not preferable, but industrial and office or retail can work,” said Johnson of mixed-use developments. “But, to make it work properly, you need density.

“If you don’t have the allowable density in place, then you’re fighting with city hall. Vancouver is doing a very good job in bringing in some new zoning categories that will allow two or three times density on industrial. We don’t have that yet in Toronto.”

“We have to find ways of facilitating brownfield development and getting more density and using space that we have in the urban core,” said Pickering.

Johnson said many developers are used to building on greenfield sites, but there’s a learning curve and challenges from existing buildings and contamination for building on brownfield sites. Municipalities can do more to spur development on these sites, noted Johnson, who cited available land in South Etobicoke.

Air Canada Cargo signed a deal with Drone Delivery Canada in June to partner on marketing the latter company’s drone delivery services in Canada. If they prove feasible, such services could revolutionize how products are moved.

Robillard said courier companies pay heavy parking fines for their trucks and vans, and drones could help solve that issue.

Brunt said crowd-sourcing deliveries, similar to what Uber has done with transporting people, could become important for companies which promise goods within an hour. That’s a time frame professional couriers might have trouble achieving.

However, having unlicensed people making these quick deliveries could cause other potential problems, he concluded.