Rester Management to acquire control of ELAD Canada for $508M

Rester Management of Montreal has a binding agreement to buy ELAD Group’s interest in ELAD Canada... 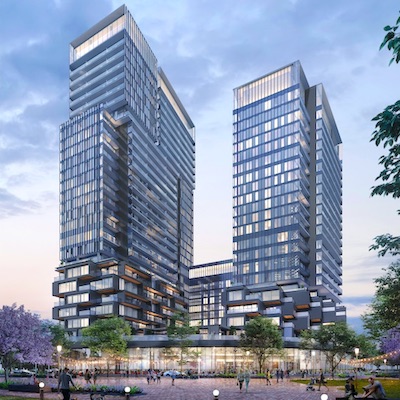 The Galleria on the Park development in Toronto, being constructed by ELAD Canada. Control of the company is being acquired by Rester Management of Montreal. (Courtesy ELAD)

Rester Management of Montreal has a binding agreement to buy ELAD Group’s interest in ELAD Canada Realty for $508 million, ELAD reports in a release Friday morning.

ELAD Canada is a Toronto-based Canadian subsidiary of controlling shareholder ELAD Group, which in turn is controlled by Israeli billionaire Yitzhak Tshuva. Tshuva’s companies have been exploring numerous options to reduce their overall debt load in recent months, according to numerous reports in Israeli media.

The Canadian sale excludes assets valued at $262 million, which will remain under the ownership of ELAD Group. These include: the retail portion of the Galleria on the Park development; profits from Block C of the Emerald City development; plus financial assets (including two Florida multifamily assets); and the potential for additional payouts if certain assets outperform their budgets.

A spokeswoman for ELAD Canada, in reply to a query from RENX, said no further comment will be made at this time.

In its release, ELAD Canada says Rester Management plans to continue its business activities and retain CEO Rafael Lazer for a period of at least three years. It also intends to retain other “key personnel.”

The deal is structured to provide a $342 million payment on closing with the remainder via future payments and earnouts. The transaction is slated to close within 60 days, but no later than March 31, 2021 subject to the completion of ”customary conditions.”

“The transaction reflects the incredible strength and quality of our assets, our expertise, and the positive management of our organization,” said Lazer in the announcement. “Our engagement with Rester Management over the past few months has been extensive.

“I was impressed by their deep knowledge and vast experience, and we are confident this is a value-added partnership for our portfolio, tenants and condo purchasers.”

ELAD had previously been in talks with a group headed by Toronto’s Plaza Partners and U.S.-based Argent Ventures in July. That deal had been valued at up to $608 million, if all purchase options had been exercised. It also involved ELAD Group retaining some of its assets.

However, the Rester bid then surfaced in August.

Rester Management is a company which has owned, developed and managed office, retail and residential properties primarily in the greater Montreal area. It is controlled by the Drazin family, which owns and operates several million square feet of commercial space throughout the greater Montreal area, as well as residential, commercial and industrial properties in Eastern and Western Canada and in eastern United States.

The family is also involved in CREST Realties, which owns a portfolio of fifteen multifamily properties in the New York City area with close to 500,000 square feet.

The family has been involved in the Canadian real estate scene for over a century. Its early 1900s origins were in construction and the ownership of residential properties in Ottawa. The family relocated to Montreal in the 1920s, and by the 1940s the portfolio grew to include commercial and industrial real estate.

ELAD Canada and its developments

ELAD Canada says it is moving ahead with the launch of Galleria III, a 31-storey mixed-use tower, this fall. It is the third phase of the Galleria on the Park master-planned community in Toronto.

ELAD Canada is a multi-billion dollar real estate development, investment and asset management company with mixed-use developments and properties across Canada and the U.S. The company has been active for more than 20 years in Canada.

ELAD Canada is also currently working on Lansing Square in Toronto, a 400,000-square-foot office complex on approximately 15 acres slated to be redeveloped as a mixed-use community.