Shadows vs. housing: This debate should be a no-contest

Shadows are a recurring concern local communities and members of the public raise in any developm... 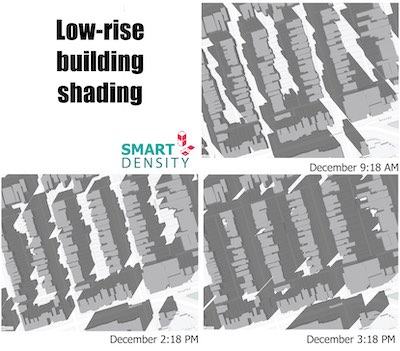 Shadows are a recurring concern local communities and members of the public raise in any development project.

Believe it or not, we also hear it in our “missing middle” projects that, by definition, are limited to no more than four storeys tall,  proving that some other forces may be at play. One of these, NIMBYism, which works to block the type of housing we need to achieve the affordability we crave so desperately.

Individuals must put their backyards aside and instead be reminded that we all have a responsibility to take care of our collective backyards – the backyards we all participate in as part of the social fabric of society.

But what sounds great in theory doesn’t necessarily play out in reality. The social good isn’t equal or equitable. Power dynamics around race, class, gender and ability favour some while leaving others behind.

Those that hold power define whose social good is heard and who ultimately has the influence to make change happen. This power manifests itself with incumbent homeowners who overwhelmingly challenge density, massing, shadows and appeal to the not in my backyard movement without any regard for the benefits of these specific typologies.

Therefore in challenging the status quo, we present four reasons why shadows should not be used as substantive arguments against development:

1. Shadows are ever-present in our neighbourhoods and are not exclusively associated with mid-rise and tall buildings. For example, during the long winter months in Toronto, even low-rise and single-family houses cast a long shadow for most of the day.

2. The second point is that there are safeguards in place to reduce the effect of shadows. The City of Toronto has design guidelines which ensure five hours of direct sunlight on our sidewalks to create a better pedestrian experience.

4. Finally, although shadows receive much more discussion in our communities, they aren’t the most critical aspect affecting pedestrian experience. Although less tangible than light, other factors like wind exposure present an even more unpleasant experience for the public when they aren’t protected.

There have been rare circumstances where opportunities have risen to the forefront that go against traditional planning judgements.

405 Sherbourne in Toronto is a perfect example of such a property under the Toronto’s “Housing Now” program, managed by CreateTO. The original 2020 proposal called for a 22-storey tower with 216 rental units, including 108 units of affordable rental.

A modified 2021 proposal now calls for a 25-storey tower with 266 rental units, including 133 units of affordable rental. The addition of three more storeys created more market-rental units and affordable housing.

The taller building will cast a slightly longer shadow.

Planning is never a zero-sum game; there is always a tradeoff, but as many have noted, the planning dogma around shadows results a sacrifice of affordable housing units that prevents individuals from moving into safe, reliable and affordable homes.

Many missed opportunities have real-world consequences for our communities when we reject common sense development and end up with results that on a whole, might have a more significant deficit on the social good than would be the case if we accepted a minor shadow.

One recent downtown Toronto example is the purpose-built rental development at 27 Grosvenor Street.

The shadow impact of the extra density on this site in the 2019 plan would only have been a small 6.5 per cent shadow impact between noon and 1 p.m. at the March and September equinoxes.  There would be no shadow impact on the small park during the summer months at the original higher-density design.

The point must be raised whether such a minor shadow impact is worth protecting, and if the 26 affordable units that have been lost should have been sacrificed to avoid such a little shadow.

EDITOR’S NOTE: This column was updated with a more recent version at the request of the author.

How Toronto’s CityPlace found its sense of place