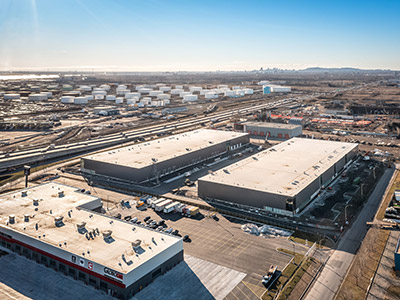 Skyline Industrial REIT has bought out its development partners Rosefellow, F.I.T. Ventures and Wellmount in a newly developed light industrial complex in Montreal.

The property is at 8300 Place Marien and 11235 Metropolitain Blvd. E. It is comprised of one single-tenant building and one multi-tenant building that combine to offer 259,198 square feet of industrial space on the 11.71-acre site.

“We believe that the partnership among Rosefellow, Skyline Industrial REIT, and F.I.T. Ventures will continue to deliver state-of the-art facilities that meet the growing demand for purpose-built warehousing and logistics space,” REIT president Mike Bonneveld said in the announcement.

Following the acquisition, the Guelph-based and privately held REIT owns 58 properties in 33 communities in five provinces, with a total of 9,013,197 square feet of industrial space.

The REIT is distributed as an alternative investment product through Skyline Wealth Management Inc. It is operated and managed by the Skyline Group of Companies.

This isn’t the first partnership Skyline has forged with the Montreal-based real estate development firm Rosefellow.

Skyline invested in Rosefellow’s first fund in March 2021 and along with F.I.T., a private equity firm, is participating in its second $100-million fund. That fund is focused on the Greater Montreal Area, Quebec City and Ontario.

Part of that second fund is being used to finance the $70-million acquisition of a 1.35-million-square-foot, industrial-zoned site from the City of Kirkland, which Rosefellow said is the last greenfield site on Montreal’s West Island.

It will also be allocated to a 15-acre industrial development property in Ottawa, with plans to begin construction soon.

Rosefellow plans to build three or four class-A industrial buildings of 100,000 to 200,000 square feet each on the Kirkland site, at the northwest corner of Saint-Charles Boulevard and Highway 40 (Trans-Canada Highway) at a total development cost of $175 million.

A City of Kirkland release states the total project cost will be around $300 million.

“We’ve got about 11 projects underway, with the majority in the GMA (Greater Montreal Area), that will deliver about three million square feet by the time we’re done,” Bonneveld said earlier in September, speaking about the Rosefellow partnerships.

Previously, Skyline and Rosefellow partnered on a 325,777-square-foot facility at 151 Reverchon Ave. in Pointe-Claire, a suburb of Montreal.

Midway through 2021, Skyline sold most of its small-bay industrial properties — about $450 million worth. It is redeploying the capital into newer properties, including a 16-building, two-million-square-foot, $309-million portfolio in Calgary and Edmonton.

In June, Skyline Industrial REIT changed its name from Skyline Commercial REIT as a result of its increasing focus on warehousing and logistics assets.