Spallacci, Valery to build The Moderne in Hamilton

Two Hamilton developers will partner to build the 36-storey The Moderne, which will become the se... 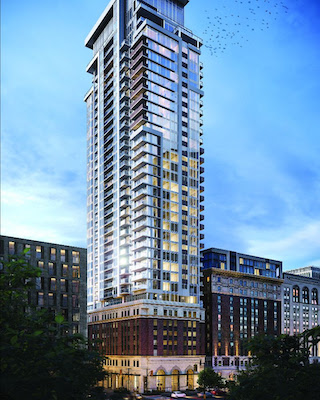 The 36-storey The Moderne condo tower will be developed along King and Catharine Streets in Hamilton. (Courtesy Spallacci Group)

Two Hamilton developers will partner to build the 36-storey The Moderne, which will become the second-tallest building in the city’s downtown core.

Spallacci Group and Valery Homes will develop The Moderne along King and Catharine Streets, adjacent to their earlier Residences at the Royal Connaught redevelopment project. This third phase of Royal Connaught Square will be the first of three new residential buildings planned for the site.

The 13-storey Edwardian-styled Royal Connaught was unveiled as a luxury hotel in 1916, but in more recent times had sat vacant for years after going into receivership in 2008. Its restoration and redevelopment as a condominium that reflected the craftsmanship of the original hotel launched the Royal Connaught Square site.

The first phase went on sale in 2014, offering 122 suites in the original hotel. They were all sold and occupancy took place in 2016. Sales of the second phase, the Penthouse Collection, launched in 2016 with 14 suites — including eight two-storey loft-style units.

That set the stage for The Moderne’s sales launch this summer. It’s in the registration phase now and prices haven’t yet been announced. If sales go as well as expected, construction completion is anticipated in 2024 or 2025, according to Spallacci Group president Rudi Spallacci, in an email exchange with RENX.

Burlington-based architecture firm KNYMH designed The Moderne, which will have an art-deco-inspired podium paying homage to the site’s history topped with a reflective tower. Toronto’s esQape design is overseeing the interior, which will have one-bedroom, one-bedroom and den, and two-bedroom suites.

The Moderne’s eighth floor, named The Social Club, will include a fireside lounge, co-working spaces, a meeting room, games room, billiards, movie theatre and wine- and scotch-tasting bar, as well as a rooftop patio with a dining terrace, grills and fire pits.

“The Moderne offers its urban residents the best of downtown Hamilton – to live in the same community as a historic gem, frontage onto a pedestrian-only footpath with the revitalized Gore Park (which dates back to 1850), and access to downtown’s growing restaurant and café scene, parks and leisure, entertainment & transport needs,” Spallacci wrote.

Spallacci Homes has been family-run for three generations and has been involved with building custom homes, adult lifestyle communities, master-planned neighbourhoods and condos. Spallacci Group has experience in development, design and construction for a variety of commercial, residential and institutional clients.

Valery Homes has been active in Ontario for more than 60 years.

Its sold communities include low-rise developments North Oakville in Oakville, Indulgence in Ancaster and Mount Pleasant Meadows in Brampton.

Don Wilcox Residential Transactions Ontario Apr. 28 2021
Steve McLean Business reporter
Steve is a veteran writer, reporter, editor and communications specialist whose work has appeared in a wide variety of print and online outlets. He’s the author of the book Hot Canadian Bands and has taught reporting to college students. He is based in Toronto.