Stack Infrastructure will launch its first Canadian data centre campus in the east end of Toronto... 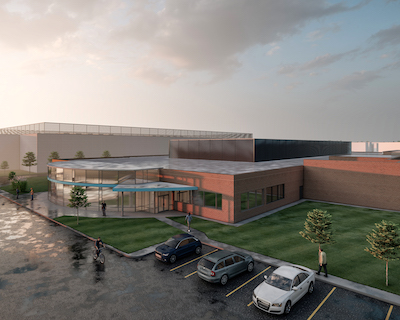 Stack Infrastructure will launch its first Canadian data centre campus in the east end of Toronto in a joint venture with developer First Gulf.

The 56-megawatt campus will be located at 3950 Danforth Ave. on a site formerly owned and occupied for decades by pharmaceutical company Eli Lilly.

The 19-acre property was acquired by First Gulf in December, after it beat out several other short-listed bidders. Stack became involved a short time later after the two companies were introduced by a broker and they realized they had the right synergies to become equity partners in a joint venture.

Financial details weren’t released by First Gulf, but the property sold for $24.6 million according to data made available by Avison Young.

An existing building will be retrofitted to create an eight-megawatt data centre that should be in “service-ready mode” within a year, Great Gulf Group chief executive officer Ilias Konstantopoulos told RENX.

Great Gulf Group is the parent company of First Gulf, and Konstantopoulos succeeded Jerry Patava as its CEO in January 2020.

Konstantopoulos said it would take a few months for data halls to be up and running after the building is completed.

Following the completion of the retrofitted building, and assuming leasing demand is as strong as expected, a new 24-megawatt facility should be completed by mid-2024 and a second 24-megawatt data centre by mid-2026.

There will be approximately 625,000 square feet of data centre-specific space upon full completion of the project.

The site will be fed by three diverse substations served by Toronto Hydro for maximum scalability and redundancy. The 56-megawatt campus will enable hyperscale and enterprise clients to choose among ready capacity, powered shell and build-to-suit customized opportunities.

While the data centres are being built on a speculative basis, Konstantopoulos said there are already a lot of leasing discussions taking place. At this point there isn’t a plan for a broker to seek out potential tenants, he added, since Stack already works with a network of companies which might be interested.

“It could be as many as a dozen-or-so leases, or it’s entirely within the realm of possibility that a hyperscaler might want 24 or 48 megawatts. It could evolve into a build-to-suit.”

“Toronto, with its incredible economic growth, access to power and connectivity, is one of North America’s most exciting data centre expansion opportunities,” Stack CEO Brian Cox said in a media release.

“Our company continues to develop where our hyperscale and enterprise clients need to be, and we couldn’t be more excited to partner with First Gulf and expand internationally to meet those needs. This represents the next chapter in the fast-moving and ever-expanding story of Stack growth.”

Konstantopoulos said Toronto was a natural choice for Denver, Colo.-headquartered Stack to launch its international expansion because:

– there’s demand for data-centre infrastructure in the city by Stack’s largest clients, including Amazon, Microsoft and Google;

– Toronto isn’t in a seismically active zone or a hurricane zone, which offers stability for critical infrastructure;

– the city offers a talented, experienced and technology-friendly labour pool;

– and Canada is a growth market with a stable economy, government, legal system and corporate structure.

First Gulf isn’t building any other data centres at this point, but Konstantopoulos said it will work closely with Stack and hopes to continue its good relationship with the company so it can assist it with further Canadian data centre developments.

First Gulf is also open to working with other data centre operators looking for space in Canada.

About Stack and First Gulf

In addition to the Toronto expansion, Stack recently announced a round of executive hires and the issuance of U.S.$400 million of securitized notes. It’s also closing out delivery of a new 24-megawatt facility on a 28-acre campus in a suburb of Portland, Ore.

First Gulf is a fully integrated company involved in all aspects of real estate development, from land acquisition and planning approvals to design-build, construction, leasing, financing and property management.

It has developed and built more than 30 million square feet of industrial, office and retail space valued at more than $4 billion since its inception in 1987.

Top-10 CRE transactions in Toronto/GTA during 2019

Steve McLean Commercial Market Reports National Apr. 26 2021
Steve McLean Business reporter
Steve is a veteran writer, reporter, editor and communications specialist whose work has appeared in a wide variety of print and online outlets. He’s the author of the book Hot Canadian Bands and has taught reporting to college students. He is based in Toronto.