Starlight Investments has been on an apartment buying spree during the past couple of weeks and a... 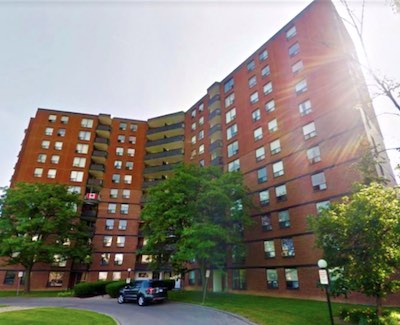 This 11-storey apartment building at 10 Highland Cres., in Kitchener is one of 18 buildings Starlight Investments has acquired in recent weeks. (Courtesy Starlight)

Starlight Investments has been on an apartment buying spree during the past couple of weeks and also announced Tuesday morning it will seek investor approval to reorganize its Starlight Hybrid Global Assets Trust (SCHG-UN-NE) as a private investment trust.

The apartment acquisitions involve a total of 18 buildings from Victoria to Toronto, comprising almost 900 units. The acquisitions were made in multiple transactions during the past few weeks. Starlight did not disclose financial details of the acquisitions.

Although few details were provided about the reorganization of the Hybrid Global Assets Trust, the three-year-old fund is focused on investing in institutional-quality assets in the global real estate and infrastructure sectors.

In the announcement, Starlight says full details of the reorganization will be provided in a package for unitholders which will be issued on June 18. If the move gets approval of 66.67 per cent of unitholders, Starlight intends to make the change by Aug. 20.

Unitholders will be able to vote on the reorganization during a special virtual meeting on July 28.

According to the most recent financial report issued by Starlight, as of Dec. 31, 2020 the trust held positions in the securities of four funds including Starlight’s Global Real Assets Limited Partnership, its Canadian Residential Growth Fund and its Private Global Real Estate Pool. It also held an interest in the EagleCrest Infrastructure Canada LP. In total, about $40 million had been invested.

The most recently announced acquisition is a portfolio of eight multiresidential buildings in Victoria, which contains a total of 485 units. They are:

– 948 Esquimalt Rd. – A five-storey mid-rise which contains six bachelor, 102 one-bedroom, 19 two-bedroom and nine three-bedroom units for a total of 136 apartments. The units include private balconies or patios and amenities include a fitness centre, storage lockers, on-site laundry and covered surface parking.

– 1030 Pendergrast St. – A four-storey building with seven bachelor, 39 one-bedroom and 11 two-bedroom units for a total of 57 apartments. They include private balconies or patios and the property has on-site laundry, covered surface parking and storage lockers.

– 3255 Quadra St. – The three-storey building is comprised of three bachelor, 12 one- bedrooms and 16 two-bedroom units (31 apartments). They offer private balconies or patios and the site offers on-site laundry and covered surface parking.

– 1126 Rockland Ave. – A four-storey building with six bachelor  and 29 one-bedroom units for a total of 35 suites. The property has on-site laundry and covered surface parking.

All of the Victoria acquisitions will be managed by Devon Properties.

Starlight’s other acquisition in B.C. is a smaller building at 165 East 19th Street in North Vancouver, a three-storey property with 14 units.

In Ontario, its largest acquisition is a 375-unit portfolio in Kitchener-Waterloo, just west of the Greater Toronto Area. The growing cities, long known as one of Canada’s most significant tech hubs, has excellent highway and access to Toronto and a new light-rail transit system.

“Population growth, employment opportunities, business development and infrastructure expansion all play a key role in the continuing advancement of Kitchener-Waterloo and our decision to expand our multiresidential footprint in this high-tech corridor,” said Daniel Drimmer, Starlight’s president and CEO, in the announcement.

– 318, 332 and 352 Patricia Ave., Kitchener – The property includes three-storey concrete buildings containing 105 units (39 units in 318 Patricia, 33 units each in 332 and 352 Patricia). The one-, two- and three-bedroom units are equipped with furnished kitchens with stainless steel appliances and they offer on-site laundry and surface parking.

– 10 Highland Cres., Kitchener – 11-storey concrete mid-rise with one bachelor, 65 one-bedrooms and 95 two-bedrooms (161 units). The apartments have private balconies or patios, and the building has on-site laundry and underground and surface parking.

– 36 River Rd. East, Kitchener – A six-storey concrete mid-rise containing one bachelor, 10 one-bedrooms, 20 two-bedrooms and eight three-bedrooms (39 units). Some offer a private balcony or patio, and the site has on-site laundry and surface parking.

– 500 and 504 Glenelm Cres., Waterloo – The site has two, three-storey concrete buildings with a total of 71 one-, two- and three-bedroom units. They offer private balconies or patios, on-site laundry and surface parking.

Greenwin will manage all the newly acquired Ontario assets.

“This investment is a valuable addition based on its attractive location, alignment with our existing multiresidential platform and opportunity to enhance the livability of the neighbourhood,” Drimmer said in the announcement.

The Toronto-based firm manages over $20 billion of assets on behalf of institutional joint ventures as well as publicly listed REITs, closed-end funds and investment funds and employs an experienced team of over 300 professionals.