The developer of a more-than-$100-million condo project in Montreal is betting that its natural setting, the new Champlain Bridge and a new light-rail station will help sales pop. 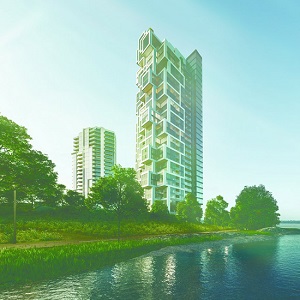 Construction is slated to begin next summer on the 32-storey Symphonia POP tower on the southern tip of Nuns’ Island, just off the Champlain Bridge.

The building will feature 240 units selling from $250,000 to $2 million and will open in 2020, after completion of the new bridge and shortly before the scheduled 2021 opening of a new REM (Réseau électrique métropolitain) station on Nuns’ Island.

When it comes to the city’s infrastructure construction, “people can see the light at the end of the tunnel and realize how much of a jewel this place is,” says Kevin Robinson, general manager of project manager Développements Symphonia, part of Montreal-based Westcliff Management. “It’s so close to downtown (but), you can feel you’re in a country setting.”

The building will be located on the banks of the St. Lawrence River, next to a golf course and each unit will have water views in perpetuity.

“It’s a choice location. There will never be buildings built around it which will block views,” Robinson says. “That joins our concept which is ‘sortez de l’ombre’ (get out of the shadows).”

He says the concept is a bit of a poke to downtown condo developments which have “all of the amenities at your doorstep but on the other hand you’re living in a bit of a concrete jungle. People want a little bit of an escape from that, from their hectic hustle-and-bustle work week.”

Barring traffic jams, Nuns’ Island is a 10-minute drive from Montreal. In addition, the new REM station on the island will be five minutes away, allowing residents a short commute downtown by public transit.

Symphonia POP will be located next to Symphonia’s first phase, completed in 2014. It consists of 25 floors and 171 condominiums.

Robinson says the first building was fully sold with a wide variety of buyers that included retirees, young professionals, young families, people who still work but are downsizing and people who vacation in Florida or have cottages in the nearby Eastern Townships who use their condos as a pied à terre. “I think the second phase will have the same attraction.”

Market conditions in Montreal are much more favourable than they were a few years ago, he says. There has been a reduction in the amount of time resales are on the market, prices are starting to increase and the economy is doing well.

He adds single family homes in Montreal have become very expensive and to many are “almost unaffordable. Condos are still a way for people to access property and have a really nice quality of life in a more affordable fashion.”

Founded in 1972, Westcliff has a portfolio of more than 10 million square feet of leasable space in Canada and the U.S and about 10 million square feet of land for future development. Its projects include regional and super regional shopping centres, office towers, industrial properties, condominiums and apartments in Quebec, Ontario, Nova Scotia, Newfoundland, Labrador and Dallas.

One- to four-bedroom condos

The POP in Symphonia is named after superimposed cubes, called pops, which will jut out horizontally in units on the north side of the building.

Units will range from 600 to 3,000 square feet and from one to four bedrooms. There will also be penthouse apartments with rooftop terraces and some two-storey residences.

Robinson says the condo market in Montreal continues to show “tremendous strength” and, unlike Toronto or Vancouver, faces no prospect of a “speculative bubble.”

“We have a lot of owner occupants still. It’s the majority of the marketplace.”