Construction at the mixed-use Bayside Toronto development is about to accelerate once again, with... 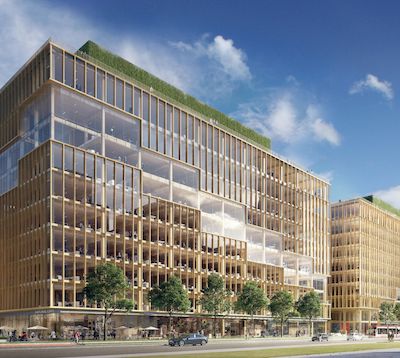 Construction at the mixed-use Bayside Toronto development is about to accelerate once again, with Hines hosting the official groundbreaking for the T3 Bayside office and retail complex on July 23.

It’s the latest addition to the 13-acre, master-planned Bayside Toronto site. The 251,000-square-foot T3 Bayside is the first of two heavy timber office buildings to be built on the site in the East Bayfront neighbourhood. Construction has begun despite Hines not having any confirmed tenants for the project.

“We have confidence in the Toronto marketplace and we’re proceeding,” Hines senior managing director and country head Avi Tesciuba told RENX. “A number of parties have shown interest.”

CBRE is responsible for marketing and leasing the first phase of T3 Bayside. Once its twin mass timber-built structure is completed, the two T3 Bayside buildings will include more than 500,000 square feet of office space.

“It’s a mirror building that will be driven by market demand,” said Tesciuba. “What we think might happen is that an anchor tenant might be too large to stay in one building and may want the two buildings right away, or at least a portion of the second building.”

Zoning approvals are in place, so Tesciuba said Hines “could develop the second building on the heels of the first one.”

Construction to begin on Aqualuna

The building is one of two which will soon be under construction at Bayside, which is now entering Hines’ final construction phase.

Aqualuna will be a 468,000-square-foot, 240-suite condominium comprised of two 16-storey towers to be built in partnership with Tridel. After going through a minor variance committee hearing in mid-July, Hines expects to begin construction in August.

Aqualuna will feature a sixth-floor amenity terrace and pool with views of Lake Ontario as well as direct access to an indoor lounge. The ground floor will have approximately 18,000 square feet of retail space.

Seventy-eight per cent of the units are sold and occupancy is scheduled for October 2024.

“The only other phase left is an affordable rental building that’s controlled by the city,” said Tesciuba, who is responsible for all real estate activities in Canada for Hines, which is headquartered in Houston.

There are no firm timelines in place to start construction on the apartment building. While Hines would like to be part of that project, the City of Toronto is leading and funding the project and will make the decisions on how it progresses.

When it’s complete, Bayside Toronto will include: two million square feet of housing, office space, shopping and restaurant destinations, cultural venues and walking promenades along the shore of Lake Ontario.

It’s just one of several major Canadian projects Hines is developing, some in partnerships with other firms.

The largest is CIBC Square, which Hines and Ivanhoé Cambridge will jointly develop, own and manage. It’s comprised of 49- and 50-storey class-AAA towers at 81 and 141 Bay St. in downtown Toronto.

CIBC will occupy about 1.7 million square feet at the 2.9-million-square-foot complex. Microsoft and Boston Consulting Group will also be major tenants.

CIBC Square will feature a one-acre elevated park that will be built over a rail corridor and link the towers four floors above street level.

Other amenities will include: direct links to transit channels; a conference centre; a fitness facility; bicycle storage; and a market-style food hall with a choice of dining options.

CIBC Square is being engineered to qualify for LEED Platinum and WELL certifications.

Construction has proceeded at CIBC Square throughout the COVID-19 pandemic because it was deemed an essential workplace. Tenants are already doing work on their spaces within the first tower.

Tesciuba said there’s no space available in the first tower aside from 6,000 square feet in the podium food hall.

The first building is scheduled for completion this year, while the second is expected to be delivered in 2023,

T3 Sterling Road will be a 420,000-square-foot heavy timber office development across three buildings in Toronto’s Lower Junction neighbourhood. It has a WiredScore Wired Certification and will target LEED Gold and WELL certifications.

While T3 Sterling Road has no confirmed tenants, it will include: employee collaboration areas; rooftop patios with skyline views; balconies on every floor; indoor bike parking and end-of-trip facilities; a fitness centre with change rooms and lockers; and independent food and beverage retail options.

“There hasn’t been any new construction in that neck of the woods, so there’s a lot of unsolicited interest,” said Tesciuba. “We’re just beginning our marketing efforts there, but there’s been strong interest.

“The draw for that project is the access to multiple modes of transportation and being within walking distance of the TTC, GO and UP Express.”

Hines is working through a site plan application. Tesciuba hopes construction will start in Q1 2021 for delivery in Q1 2023.

Hines is also working through the rezoning process for a mixed-use development at 64-86 Bathurst St. in Toronto. Construction is expected to start in Q2 2021 for a proposed 17-storey building that would include: 307 rental apartment units; one floor of indoor amenity space; rooftop amenity space; two levels of retail; and two levels of office space.

Hines is the developer and owner of Calgary’s One Park Central, a 32-storey, 363,000-square-foot, 462-suite rental apartment building on the northwest corner of 12th Avenue and 4th Street SW.

“Leasing velocity is really strong,” said Tesciuba. “The amenities are quite strong for this market. The location is also an advantage.”

Forty per cent of One Park Central’s units are in the podium while the remainder are in a tower. Podium units were occupied in May and the tower will be delivered next month.

Tesciuba is hopeful construction of One Park Central’s second tower will begin early next year.

The rest of Hines’ Alberta portfolio

Hines, along with a subsidiary of real estate funds managed by Oaktree Capital Management, acquired First Tower in 2018.

The 27-storey, 709,977-square-foot class-B building in downtown Calgary has been undergoing a comprehensive redevelopment of key common areas and its 34,000-square-foot +15-level, which connects it to other buildings.

The new space is nearing completion and will include: a tenant lounge/collaboration area; a café and food service area; an outdoor terrace; a fitness and wellness centre; and a flexible conference facility.

Tesciuba said the work at First Tower is generating interest from the local technology community.

Hines is an international real estate firm which launched Canadian operations in 2004. It has offices in Toronto, Calgary and Edmonton.

Hines has developed, acquired and/or managed more than 13 million square feet of office, retail, residential and mixed-use projects. It has more than $4.5 billion in assets under management and more than 100 employees in Canada.

EDITOR’S NOTE: This article was updated to revise some details about the 64-86 Bathurst project, which were provided by Hines after the article was published.

Mario Toneguzzi Commercial Market Trends National Jul. 23 2020
Steve McLean Business reporter
Steve is a veteran writer, reporter, editor and communications specialist whose work has appeared in a wide variety of print and online outlets. He’s the author of the book Hot Canadian Bands and has taught reporting to college students. He is based in Toronto.