It is apparent to me that the possibilities of the aeroplane, which two or three years ago were t... 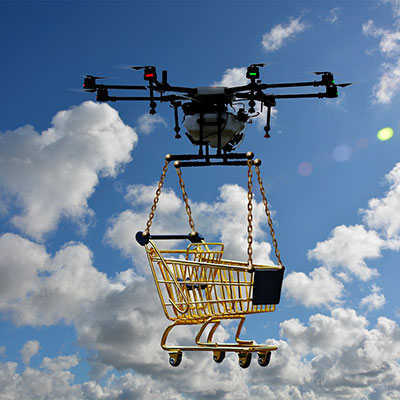 It is apparent to me that the possibilities of the aeroplane, which two or three years ago were thought to hold the solution to the flying machine problem, have been exhausted, and that we must turn elsewhere.  — Thomas Edison, November 1895

Like Edison denied the flying machine could be built, skeptics in the industry suggest problems of collisions in the air and that drones could not deliver the volume required.  Lockourier is taking the lead of industry giants like UPS, Walmart, and Amazon and preparing their products to adapt to the need.  Six years ago, Jeff Bezos promised that drones would deliver goods to our homes by 2019 and said someday they will be “as common as seeing a mail truck.” Bezos told us that the biggest hurdle Prime Air, his group and others will have to clear isn’t related to technology, but regulators.” money.cnn.com, Jeff Bezos: Amazon drones.   Regulations have not stopped Domino’s Pizza, London Drugs, Uber Eats, Air Canada, and Zipline who are actively exploring how to leverage these market advantages as well.

The FAA’s (Federal Aviation Administration) Part 135 Standard certification is the highest level of certification for a drone airline, with no limits on the size or scope of operations. UPS is the first company with this certification. With it, UPS Flight Forward drones can fly out of the operator’s line of sight, over people, with cargo weighing a whopping 55 pounds, and night flights. This is a big leap and wide autonomy provided to UPS.  This also has the potential to open the floodgates for all other major carriers in North America.

In an August 31, 2020 statement, Amazon has received federal approval to operate its fleet of Prime Air delivery drones, the Federal Aviation Administration said, a milestone that allows the company to expand unmanned package delivery [direct to consumers]. Uber Eats has different plans and would “leverage drones to move meals from restaurants to pre-determined locations, but a delivery driver will ultimately bring the food to its final destination.” Forbes.com, When Will Drones Finally Deliver Your Food. Either way, drone deliveries are taking off and the competition is heating up

One Canadian group taking up the charge is Drone Delivery Canada.  These are not the drones your best friend used to fly at the local park. These are high capacity, long distance, and fast as lightening. They carry 75 lbs, flying 105 kph up to 60 kms. They provide expedited delivery service to healthcare providers, remote communities, oil and gas, mining, and of course, courier companies.  Air Canada has partnered with Drone Delivery Canada as its exclusive drone delivery service provider – the first agreement of its kind globally. ACC has targeted up to 150,000 transactional routes to offer to their customers to help serve remote communities and increase efficiency in last-mile delivery across many verticals.

Deliveries to multi-residential building and office towers, change the need further as the package must still make its way into the condo and then into clients Lockourier lockers or smart Luxer Room. These channels are being developed as well. “In conversation with retailers that aim to leverage this technology, we are moving closer to a solution,” says Joseph Collins, CEO at Lockourier Canada. The simplest and immediately implementable is that staff collects a parcel from the secured drop point and deliver them into lockers.  “We have the distinct advantage of having both Canadian and US teams and we and LuxerOne are collectively focused on satisfying our over 6,000 North American locations as drone deliveries increase,” Collins said.  Luxer lockers accepted the 50,000,000th delivery into lockers on Christmas 2019 and by this Christmas they could almost double that. “It is incumbent upon us with our partners to lead the solution and provide our clients the most innovative, efficient delivery solution available,” says Collins.

“There has been a 5-fold increase in calls from retailers. Nationals grocery chains, leading coffee and QSR chains, OEM automotive parts suppliers, big box electronics chains, you name it. These are complex, multi-staged solutions and only the best of the best can satisfy the client need with their innovative tech.  LuxerOne does that with Lockourier. We expect large retailers to want to integrate drone deliveries and lockers in the next 12 to 24 months,” says Craig Cameron, Executive Director for Canada. “These leading brands are not only looking to improve revenue during COVID-19, but they are also seeking to improve the user experience through seamless integration with Lockourier’s Luxer lockers. Home Depot Canada took the bull by the horns, innovating as they always do for their customers, long before COVID-19 changed the world. Simply visit most stores in Canada to see their bright orange lockers.”

Lockourier rose out of Collins’ first successful locker-based business, Laundry Concierge, which he sold in 2019. It was and still is Canada’s first 24/7/365 contactless dry-cleaning service, launched in 2013.  He then uncovered the market opportunity for parcel lockers when he saw property managers struggle with boxes piling up as more consumers moved to online shopping. Launched in 2016 Lockourier hit the ground running with their first sale within a few weeks. “This was all new to Canadian developers. Working with our friends at Atria Developments and Hans Jain, CEO, was a great introduction to the Multi-family industry in the new development vertical,” states Joseph  “We launched in their beautiful 100-Bond condo-styled rental building in Oshawa and have been working with their team on their stunning follow-up second tower this past November. They are innovators and future-thinkers,” Collins continues “We also helped pave the way for several Canadian entrants importing from overseas choosing low cost, over value and support. These companies choose to import from Russia and China purchasing the locker shell and rudimentary software and then write additional code to try and improve it. Inexpensive “automated lockers” are easily found online. As Dave Campa, Director, Office and Campus locker verticals for LuxerOne says “Lots of people make steel boxes, we excel at creating the best software platform.”  Pricing and comparisons can be easily found on Alibaba and many other overseas wholesale sites such as bigy.com/automated_lockers.

After Lockourier launched with Atria they quickly secured their first two towers of over 12 now with Tridel, providing 2 solutions at Aqualina at Bayside, a Tridel and Hines joint venture.  It grew exponentially from there with BOSA, CAPreit, Time groups, Killam Reit, KG Group, Deveraux Communities, FCR, Riocan, RBC Insurance, and many more using their technology. “All counted, together with LuxerOne we have over 400 lockers installed in Canada and more coming next week with an estimated annual capacity of a staggering 2,000,000 deliveries. Some larger condo clients receive more than 25,000 packages annually through their lockers. Our changed global environment impacted by COVID-19 has expedited locker adoption by multi-family development groups big and small. We have seen a 4-fold increase in calls from rental development managers in the mid and west of Canada desperate to have us solve their dilemma of package management. We eliminate staff liability, and the future impact of staff hours spent managing deliveries,” states Hector Gonzalez, Director Western Canada

3 questions before you commit to lockers 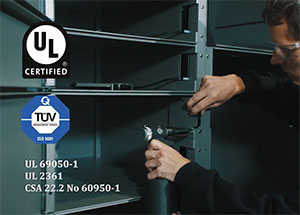 Are their lockers designed and built to the Canadian CSA standard 22.2?

Are all their expert customer and technical support staff in-house, not an outsourced answering service?

Have their lockers been installed in 1,000’s of locations, backed by $8 Billion group Assa Abloy?

“You need to ask those 3 simple questions when deciding which Smart parcel locker company to partner with.” Dylan Millward, Director, Quebec and Atlantic Canada tells his clients. “We provide all of the above and much more”

Stepping up the game and pushing the parcel locker market through innovation is how they lead. Beginning with the first-ever Canadian oversized and overflow locker that securely accepts oversize packages for multiple residents, then onto their exclusive future-proof combination locker+parcel LuxerRoom hybrid, Assistive-

Technology that aids members of our communities with a visual disability, integration with all major property management and smart building platforms such as Yardi, Building Link, Condo Control Central, Condo Concierge, SmartOne, and 1Valet, the first Canadian iOS and Android apps, and completely “touch-free” parcel pick up. It is a powerful line-up of features and benefits. Their Canadian exclusive touch-free is a huge step beyond “contactless”. Contactless is where the carrier avoids face-to-face contact with the recipient as the parcel passes into a locker. Touch-free goes beyond, never having a recipient touch the screen, the keypad, or our lockers. You get your package using your very own smartphone via Bluetooth.  In a condo and apartment environment with 1,000’s of people living and moving through the property, that is a critical property advantage.

All Lockourier systems are multilingual and offered in French, Spanish and English.

Lockourier’s Luxer One product is engineered to meet disability acts across Canada and the Standards Council of Canada and CSA guidelines. The company’s high commitment to the privacy of information fully complies with the Canadian Personal Information Protection and Electronic Documents Act standard.