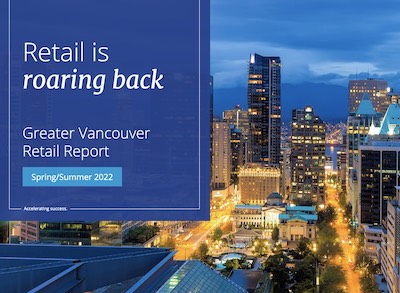 A Colliers report paints a rosy picture for retail commercial real estate in Greater Vancouver, with the regional vacancy rate at an “extreme low” of 2.5 per cent and the prospect of rising asking rents.

Entitled Retail is roaring back, the report cites a vacancy rate of 2.5 per cent in the urban area and 2.3 per cent in the suburbs. It does, however, note vacancy in the Central Business District is higher due to delays in getting large numbers of workers and conferences back into the core, but says “this is changing at a rapid pace.”

The report also states net rents continue to rise, though there are many factors for this and demand is just one of those conditions.

“Somewhat surprisingly, average net rental rates rose during the course of the COVID-19 pandemic in most markets. Today, with high inflation, rising interest rates and construction costs, most landlords are increasing net rents as much as the market will permit,” the report states.

In the most coveted spots along areas like Robson Street or Alberni Street in the downtown, net rents can range as high as $180 to $240 per square foot.

“The areas with the highest tenant demand tend to have a greater density of residential in the vicinity: Mount Pleasant, Kitsilano, and South Granville being indicative of this,” the report observes.

“Meanwhile, downtown locations, such as Robson Street and Alberni Street have experienced uneven recovery from block-to-block. The 1000 block of Robson remains in high demand with a 2.2 per cent vacancy rate and median net rents estimated between $180 – $240 PSF/per annum.

“On the other hand, the 1100 block of Robson remains in a transition from middle of the market fashion retailers to other types of retail including discount and specialty retailers, a trend that started long before the COVID-19 pandemic, and has a much higher vacancy rate of 9.0 per cent and median net rents estimated between $75 – $125 PSF/per annum.”

The lowest urban vacancy is in Kerrisdale and the Alberni District (Burrard to Thurlow), where no space is available.

“As we experience a prolonged low vacancy environment, tenants looking to locate in suburban areas are having challenges finding options,” the report notes. “As a result, we are seeing the focus of demand shift to projects yet to be constructed, instead of existing properties.”

There is no space available in several suburban sub-markets, including Coquitlam, Delta, Maple Ridge/Pitt Meadows and Abbotsford.

While government aid kept the bricks-and-mortar retail sector breathing during the shutdowns and the darkest days of the pandemic, the ending of virtually all restrictions has kicked consumer activity back into high gear. This is especially true for some of the hardest-hit sectors.

“Retailer categories that were hurt considerably included: full-service restaurants, health and fitness establishments, pubs and night clubs,” the report states. “Since the easing of restrictions in February 2022, full-service restaurants and pub operators have seen sales dramatically increase, with one remarking ‘it’s like the 2010 Olympics’.

“Health and fitness operators are once again seeking leasing opportunities as evidenced by competing offers to backfill space left vacant as a result of business closures during the COVID-19 pandemic.”

Although some projects are strictly retail, a significant amount of the planned new space will come as a result of mixed-use projects, often with large residential components.

“This low-vacancy environment, coupled with the continued demand for housing in the case of mixed-use developments, has translated into a new development cycle. Numerous projects are currently under construction or being planned,” the report states.

However, inflation, rising interest rates, supply chain and construction labour issues, government regulations (i.e. rent controls, etc.) and other factors could affect some of these projects.

“A shortage of land and high prices is pushing developers to be more efficient with the limited development sites they have, resulting in more mixed-use developments in the suburbs, following the well-established urban trend.”