A swathe of East Ottawa land zoned for industrial or commercial development for many years is sud... 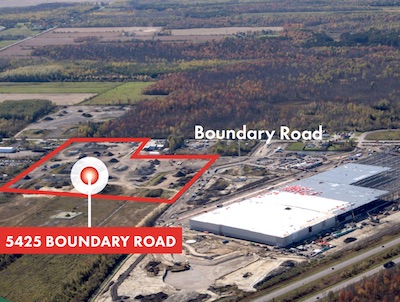 This 30-acre site adjacent to the new Amazon distribution centre in Ottawa is one of several tracts in the area up for sale. Credit the sudden interest in the region to the “Amazon effect”, according to CBRE. (Courtesy CBRE)

A swathe of East Ottawa land zoned for industrial or commercial development for many years is suddenly attracting interest from companies looking to expand, or move into the National Capital Region. The reason? The “Amazon effect”, says an Ottawa brokerage involved in marketing the properties.

“It’s happened since the start of Amazon’s interest in the deep East End,” says Ian Shackell, senior vice-president and broker with CBRE’s Ottawa office. “I think a lot of companies have recognized that and are trying to position themselves with respect to not just the Amazon effect, but their own growth.

“We’ve had a pretty stagnant industrial market for many years. But now we have seen for whatever reason exponential growth and our industrial stock has not been able to keep up. We have not had any speculative development.”

Worldwide e-commerce giant Amazon is having a million-square-foot distribution centre built along Boundary Road, at the eastern edge of the city. CBRE has been marketing three separate tracts of undeveloped nearby land, and with the city facing a severe shortage of developable industrial land in its traditional business areas, there is significant interest.

The fact the land is unserviced isn’t stopping potential buyers or tenants.

“You can’t really grow in Kanata, all because the greenbelt (protected green space) is in the way.”

So far in 2019, CBRE has sold a 10-acre tract to an Ontario transportation and warehousing service provider. It is also marketing 30-acre and 7.62-acre sites.

“Companies are attracted to this burgeoning cluster due to the affordability of the land and to be in close proximity to a key player making a bold move,” Shackell said. “Sometimes it takes one company to prove a concept and then the whole market can shift.”

The interest has caused a rapid increase in land values along the Boundary Road corridor but they remain significantly lower than the $750,000 to $800,000 per acre demanded in more urban industrial nodes. If, that is, you can even find land in the more developed areas.

“(There is) very limited supply,” Shackell said. “In fact, you could probably count on your one hand the number of sites that could potentially be made available.”

He said a search for sites to accommodate an 80,000-square-foot tenancy in Ottawa would result in only a couple of sub-lease options from properties which retailer Giant Tiger is vacating as it moves south of the city.

In the Boundary Road area, even with Amazon’s looming presence, asking prices for land are now testing the $300,000-per-acre range. The fact it is unserviced isn’t dampening interest.

The lack of available space, or land, is also affecting leasing rates. In Ottawa, class-A facilities are leasing between $10 to $11 per square foot and CBRE Ottawa sales rep Matt Shackell (part of a rare father-son team of brokers at the office) predicts that will go higher.

“The other thing to bear in mind is economics. Not just the land, but the whole package. Right now rental rates for industrial space in Ottawa are around $10.50 or $11 (per square foot),” he said. “To build (on serviced land in an established business park) you are probably at that $13 range in order to get your yield.

“The market right now at $10 or $11 is at an all-time high and has gotten there relatively quickly . . . The market hasn’t been tested on that $12 or $13 yet, whereas if you go out to these unserviced lots you can recreate that $10-$11 range that is in the comfort zone of (potential tenants).

“Once rental rates get up to $12 or $13, which under current trends they should get there, I would imagine we’d see development within our traditional nodes. But,  there is so little land there that will extinguish itself fairly quickly.”

The Amazon effect is far from the only factor driving interest in Ottawa. The city itself has just crossed the million-resident plateau, which creates an impression with some potential tenants. It services an additional half-million people in smaller centres within an hour or two of driving time.

Industrial vacancy rates have been steadily declining for several years to about two per cent. During the past few years, the city has seen absorption of about two million square feet of industrial space.

In addition to new companies wanting into the market, existing firms require space to expand.

“We’ve now become this larger entity that hasn’t kept up with the infrastructure to be able to manage exponentially the growth we’ve been seeing in residential,” the elder Shackell said.  “I think that is one of the contributing factors to a lot of companies needing more space to satisfy the local demands for whatever goods and services they provide.”

As the city grows, urban areas are expanding and traffic is intensifying. This is also creating a need for new commercial space in outlying areas of the city.

“Sometimes we’re seeing where they’ve been established in the east end, now they would like to find a west-end location,” he noted.

Traffic on Ottawa’s main east-west artery, Highway 417, simply cannot be compared to the volumes along Highway 401 through the heart of Toronto, or the challenges faced by commercial drivers in Vancouver.

However, it is becoming more and more congested, leading some companies to conclude: “We can’t operate down the 417.”