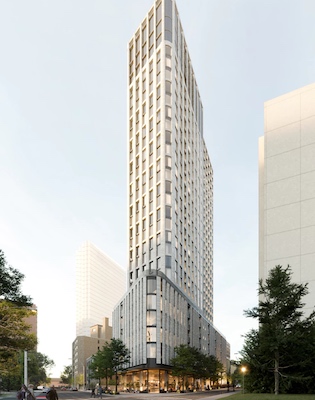 Core Development Group has focused mainly on delivering Toronto high-rise condominiums to this point, but one of its upcoming projects is a partnership for a purpose-built rental apartment known as 775 Vaughan.

The company’s president sees more opportunities in the sector.

“Rental specifically is sorely needed in Toronto and we’re happy to bring more new rental supply on board,” Bryan Nykoliation told RENX in an interview. “I think there’s a ton of opportunity and tailwinds with respect to rental.”

Shannondale Developments owned a 0.49-acre site at the intersection of Vaughan Road and Northcliffe Boulevard, just southeast of Eglinton Avenue West and Dufferin Street, that’s currently occupied by one- and two-storey residential and commercial properties. Shannondale invited Core to become a partner in building 775 Vaughan and Core subsequently brought in Woodbourne as a third partner.

Nykoliation said his company likes the area, especially with a stop on the Eglinton Crosstown light rail transit line due to be located nearby when it’s completed.

The percentage of people renting their homes as opposed to owning them has been increasing in Canada and that trend is expected to continue due to affordability issues and a growing number of immigrants — especially in large cities such as Toronto.

“We think for the next five to 10 years, there’s going to be very, very strong metrics to support rental, even in an interest-rate environment and a rising-cost environment that we’re seeing today,” Nykoliation said.

It’s hoped all approvals will be in place to allow construction of 775 Vaughan to start in September 2024, with anticipated completion in May 2027.

“We’re going to be coming in and making sure that we’ve got a great offering that’s going to be strong on the amenities with really good unit layouts, just a beautiful overall building,” said Nykoliation.

The developers are going to work with City of Toronto officials to include a community benefit program for part of the commercial and community space for 775 Vaughan.

Other developments around 775 Vaughan

The area is increasing in popularity and there are a number of multiresidential and mixed-use projects in the surrounding area of the 775 Vaughan site at various stages of development.

– Stanford Homes’ proposed 15-storey, 159-unit condo at 645 Northcliffe Blvd. is under review; and

Co-living is a purpose-built rental solution for the sharing economy, where residents share common areas of units such as living rooms and kitchens while retaining private personal spaces.

Core has embraced the concept, which is more affordable than traditional apartments, and has five co-living projects in the works for Toronto sites close to public transit and amenities.

Zoning approval has been obtained for a site at 252 Parliament St. and construction of an approximately 55,000-square-foot, 80-unit building should start before the end of the year. It’s expected to take about two years to complete.

Core hopes to receive approvals and start construction in Q3 2023 on a building of approximately 150,000 square feet that would house approximately 270 units at 403 Keele St. A target completion date of late 2025 has been set.

A Q2 2024 target has been set for planning approvals and initial construction of a building comprised of approximately 90,000 square feet and 125 units at 1233 Queen St. E. Completion would be expected two years later.

Studio JCI is the designer for all of the projects.

An approximately 60,000-square foot building with around 70 units at 929 Queen St. E. has also been proposed by Core. It’s seeking to have approvals in place in time for construction to start in the first quarter of 2024, with completion anticipated two years later.

The nearly 500 units at The Whitfield, a Giannone Petricone Associates-designed 37-storey condo at the northeast corner of Front Street East and Sherbourne Street in downtown Toronto by Core and Menkes, is well over 90 per cent sold and construction is underway.

It will also include office space and existing retail space will be integrated into the project.

Sales will soon launch for a condo project at 126-134 Laird Dr. in Toronto that will be approximately 190,000 square feet with 241 units. Construction is expected to start in the second quarter of next year, with completion anticipated in Q3 2025.

Core hopes to receive zoning approval and launch sales in Q3 2023 for a condo project at 150 Clonmore Dr. in Scarborough that will encompass approximately 165,000 square feet and have approximately 260 units.

Approvals are expected in November, with sales to launch next March and construction to follow next November. Completion of the Studio JCI-designed building is anticipated in the second quarter of 2026.

Aside from The Whitfield, all of Core’s new developments will have geothermal energy components as part of the company’s commitment to environmental, social and governance impacts.

“As a developer, we have a social and environmental responsibility to provide greener and more efficient buildings, whether it’s for our renters or our buyers,” said Nykoliation.

Don Wilcox Residential Transactions National Sep. 12 2022
Steve McLean Business reporter
Steve is a veteran writer, reporter, editor and communications specialist whose work has appeared in a wide variety of print and online outlets. He’s the author of the book Hot Canadian Bands and has taught reporting to college students. He is based in Toronto.