Centurion Asset Management has been seeking a foothold in the Ottawa multiresidential market for... 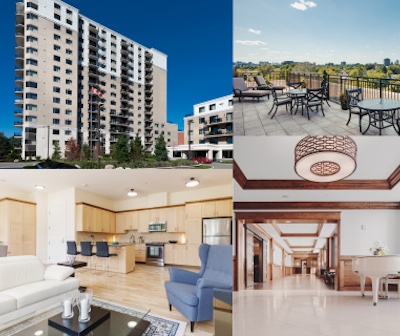 The 276-apartment Les Terrasses Francesca in Ottawa has been acquired by Centurion Asset Management. (Courtesy Centurion)

Centurion Asset Management has been seeking a foothold in the Ottawa multiresidential market for years. After acquiring its first National Capital Region property in 2021, the Toronto investor is rapidly expanding, including the pending acquisition of the 276-unit luxury Les Terrasses Francesca.

Centurion president and CEO Greg Romundt calls the property, which was developed by local firm Lépine Apartments, a “trophy” acquisition.

“We’ve been trying for a very long time to get into the Ottawa market,” he told RENX in an interview. “The Ottawa market is a pretty tightly held market and we weren’t able to get anything of scale and size for a long time. In the last couple of years we’ve managed to turn that.”

Financial details were not disclosed. The transaction is expected to close in October.

One attraction for Centurion is the mix of apartments in the buildings, which range from about 825 square feet to 1,725 square feet. The average, Romundt said, is 1,159 square feet.

Floorplans include both one- and two-bedroom layouts, some with dens and what Centurion describes as “large balconies.”

When the purchase closes, Centurion will have 792 apartments in Ottawa and neighbouring Gatineau, all acquired during the past 18 months. It bought a 171-unit building at 550 Langs Rd. early in 2021 and added the new 345-unit Le Central in Gatineau earlier this year.

It is also a partner in a major downtown mixed-use development with Main + Main and Westdale Properties to deliver a two-tower project with over 560 apartments and about 20,000 square feet of retail space. That site, at 400 Albert St., is just a couple of minutes walk from the Lyon LRT station.

Romundt said acquiring the Langs Road property (part of a portfolio divested by Starlight) was the catalyst Centurion needed.

“That allowed us to plant a flag. Once you’ve acquired a place and planted a flag, you can move in a management team and start building around it,” Romundt said. “That was the seminal event for us, getting a starting portfolio and building on it, and making a concerted effort to do so.”

Ottawa might not have the heft of the biggest Canadian markets, but it also doesn’t have the very high asset prices.

And, with Canada committed to a significant immigration policy for at least the next several years, Romundt said it and other mid-sized markets remain very attractive.

There is also a significant amount of development in and around Ottawa to meet that growing demand.

“There are a number of developers who are building new in that region,” he continued, noting Quebec and Calgary also have plenty of development underway. “The economics being able to make it work in those areas . . . it is very very difficult in Toronto to make new construction work.

“We like that merchant developers are building things and we have a whole program around either providing debt or equity and then buying them when they are complete.

“Developers are active there, so that is providing us an active pipeline.”

The economics of building in Ottawa

They can also afford to build larger units, which can accommodate families or people who simply want more space – especially with the work-from-home dynamic outliving the pandemic restrictions.

“In places like Toronto we’ve almost entirely failed to build in the Toronto core, or anywhere close to it, family living. Not only is there no services, but developers can’t afford to build three-bedrooms or large units,” Romundt noted.

“People can’t, or won’t pay for it. They’ll go to the suburbs instead or into single-family homes when they can afford to pay those prices; they can get a small house for it.

“The math is different (in Ottawa). You can still build something reasonably costed in Ottawa and a lot of other suburban markets, too, and people want to live there.

“And it’s exactly the kind of product that suits either the work from home or someone that wants to sell their home and move into a place that’s really nice and they don’t have to worry about repairs and maintenance and all that other stuff.”

The company has also been active in another sector, medical office buildings. Romundt said some of the metrics in the MOB market are the same as in multiresidential

“I happen to like the MOB space, been watching it for a couple of years and kind of tinkered around the edges on it,” he explained. “I generally speaking don’t like office, but I think medical office is different.

“Very sticky. Unlike regular office if no one has to go in to the office, then offices aren’t worth that much. But medical offices, do you really want to do a Zoom call with your doctor? Probably not, right? Because ‘I need you to look at this’. . .

“It fits into a very similar strategy, which is needs-based rental product. That’s what I find attractive.”

Its most recent acquisition in the space is a nine-building portfolio in Ontario and Alberta in partnership with Appelt Properties Inc. It was acquired from Invesque Inc. (IVQ-U-T) for about $94 million in August.

The buildings are in the Ottawa, Belleville, Stratford and Vaughan areas in Ontario, as well as in Edmonton and Medicine Hat, Alta.

“For us it was just an opportunistic trade and we have a good partner in the MOB space which we’ve done a couple of opportunistic-type deals on,” Romundt noted.

He said Centurion is always willing to look outside its “traditional core because we have this portion of our portfolio where we’ll look at anything that’s opportunistic if we can get a great price on it.”