Carttera Private Equities Inc. is starting construction of the 400,000-square-foot 65 King East office building in downtown Toronto this month without any confirmed tenants. 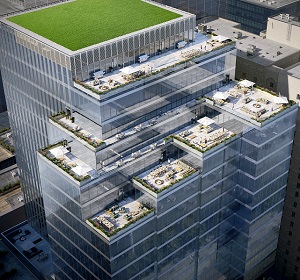 “I think it’s a weighted risk in going forward on spec,” said Werner Dietl, executive vice-president and regional managing director for the Greater Toronto Area at CBRE, the commercial real estate services and investment firm which is the exclusive listing agent for 65 King East.

“They feel — based on the size of the building, its location and its attributes, with balconies and other unique characteristics — that it’s well-positioned in the market.”

Toronto’s record low downtown office vacancy rate has been the lowest in North America for almost two years, which caused net average class-A asking rents to increase by more than 10 per cent last year. With a large and consistent demand for downtown office space — despite more than 5.2 million square feet of new office supply being delivered between late 2014 and the end of last year, and another 4.75 million square feet now under construction — building on spec isn’t as brazen as it once was.

Cadillac Fairview’s 879,000-square-foot 16 York broke ground in May 2017 without tenant commitments and is slated to open in two years. It’s now more than 50 per cent leased.

Cadillac Fairview also announced a 46-storey, 1.2-million-square-foot tower at 160 Front St. W. before publicly naming a tenant. It’s since been announced that the Ontario Teachers’ Pension Plan will take nine floors, moving from its current head office in North York. Construction will begin next year and it’s scheduled to open in 2022.

Allied Properties REIT has zoning approval for its 48-storey Union Centre at 20 York St., which as of yet has no anchor tenant and no announced construction start date.

“It’s going to be ahead of a number of other developments that are out there that have announced going on spec,” Dietl said of 65 King East. “The timing piece is going to be critical as we get down the path because a lot of firms are looking at consolidation and changes to their existing footprint and will need to be in a building by the end of 2020. We can deliver that.”

The 19-storey 65 King East, designed in collaboration with IBI Group and WZMH Architects, will be easily accessible by public transit and close to established amenities. It will preserve the three-storey facades of four heritage buildings along King Street East to protect the neighbourhood’s historic character.

The building’s attributes include:

The goal is to have tenant fixturing available in the fourth quarter of 2020. While tenants will be able to finish their spaces on their own, turnkey solutions will also be available.

“We have technology that we’ve been using that allows tenants to do a 3D walk-through of the space, using three or four different style packs,” said Dietl.

While Dietl would like to have most of 65 King East leased by this time next year, a component of it will be left available until later in case companies who’ve committed to space grow and need more.

“It offers the marketplace and the tenants that are out there a different value proposition than being in a larger tower,” said Dietl, who noted that a 100,000-square-foot tenant will have a bigger impact in a 400,000-square-foot development than in a million-square-foot tower.

“It’s more about how a tenant can position itself from a branding or programming perspective in a smaller, more infill development.”

Dietl said 65 King East will be well-positioned for technology, media and advertising, and smaller law firms, though other types of tenants may also find it suitable.

“We’ve had several meetings and proposals. We’re still in the kick-off phase of our marketing, but we started our road shows on it a few months ago. We have really strong interest but we’re not inked with anyone yet.”

There will be 10,000 square feet of retail space available in the lobby.

“We’re going to wait a little bit to see what the tenant composition looks like above and then program the bottom,” said Dietl. “The concept is that you’d have a restaurant and a café.

“It will be like a wholesome ecosystem which is going to be driven by the type of tenants that end up in the building. “

Carttera is a Canadian real estate investment fund manager and developer established in 2005 to invest in urban intensification projects. It has development projects totalling in excess of $2.4 billion, with the primary holdings concentrated in the Greater Toronto Area and Montreal. The firm’s properties include office, mixed-use, industrial and condominiums.