Two record sales involving the multiresidential market are indications of just how hot the sector... 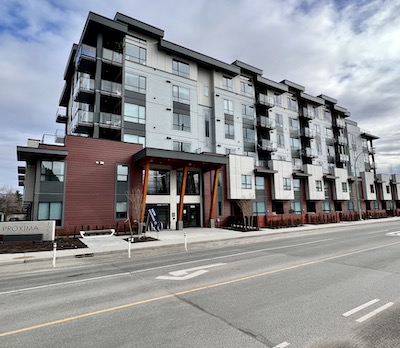 Two record sales involving the multiresidential market are indications of just how hot the sector has become in Kelowna.

Cushman & Wakefield and Royal LePage Kelowna Commercial teamed up to facilitate the largest apartment sale in the interior of British Columbia. They’ve also transacted a second sale which represents a record for dollar value per suite.

Knox Village, which is currently under construction and comprises 238 suites located beside Knox Mountain near downtown Kelowna, was sold for $86.5 million ($363,500 per suite). Proxima Urban Homes, a collection of 59 apartments and townhomes in the downtown just two blocks away from Okanagan Lake, sold for $29.5 million ($500,000 per suite).

The properties were sold and marketed by Peter Gibson of C&W and Steve Laursen of Royal LePage. Centurion Apartment REIT purchased Knox Village in a forward sale while CAPREIT Limited Partnership purchased Proxima.

Both properties were sold by Kerkhoff: Develop-Build, with a head office in Chilliwack, B.C., and another office in Kelowna. Both are residential rental properties.

“The Kelowna market is very, very, very active,” Laursen told RENX in an interview. “We have a tremendous amount of Vancouver and Toronto (buyers) entering into the market now, compared to where it was three or four years ago where they would look at it but they weren’t really there.

“Now, some of the biggest developers and REITs throughout the country are very, very active and they want to be in Kelowna.

“We’re very tight on land. Our rental market vacancy is probably around one per cent . . . and everything is going up in price year-over-year.”

Gibson said Kelowna has always been one of three cities in B.C. that have been on the radar for institutional investors.

“Typically, institutional buyers don’t buy in locations where there’s a population of under 100,000 people. Having said that, they’re starting to try and find this type of rental product,” he said.

“But, all the major players are in Kelowna now and everyone is looking to expand their portfolio. So looking forward, it’s probably going to be pretty busy times.”

Gibson said the Knox Village forward sale to Centurion is a result of a growing trend in the sector.

“A lot of the institutions are active to buy this product, but it doesn’t exist,” said Gibson. “What they’re doing is they enter into a forward contract to purchase with developers. It’s under construction now, but when we actually put the contract together they were just finalizing everything.”

In a forward sale, the buyer agrees to acquire a property while the site is under development.

“This is a new method of transaction that we’re very active in right now. We’ve got over $1 billion of transactions under contract right now and other ones that we’re working on across Western Canada,” Gibson said.

“From a developer’s standpoint, it de-risks the development for them. They know they have an institutional buyer that’s buying it at the end of the day and that can help with their financing and for the buyer it’s a way for them to secure new product.

“A lot of these big REITs are trying to secure more new product versus older apartment buildings.” 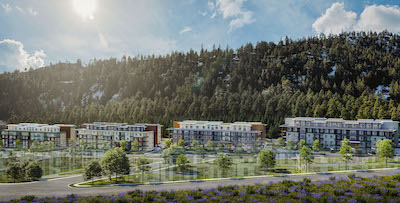 Knox Village will offer a gym, underground parking and an abundance of nearby green space. The property, located at 1420, 1430, 1440 and 1450 Cara Glen Court, had plenty of interest and multiple offers.

“So right out of your backyard you can walk and you’re onto multiple hiking trails for kilometres upon kilometres of hiking and mountain biking that will take you right down to Okanagan Lake.

“So it’s a beautiful setting in a residential neighbourhood, but still with easy access to downtown and also a 15-minute drive or bus ride to UBC Okanagan.”

Proxima Urban Homes offers a gym and rooftop patio amenity complete with barbecues, a picnic area and an abundance of green space. This property too had plenty of interest and multiple offers.

“It’s a four-minute walk to Okanagan Lake. It has all the amenities of downtown within 50 metres of their doorstep. And it was finished product with stabilized rent at some of the highest rents in Kelowna.”

Laursen said Kerkhoff is a family company in business since the early 1970s, which built one of Kelowna’s first downtown high-rises. In recent years, the company has built the city’s two largest residential towers.

Currently it is building the One Water development with two towers of 36 and 29 storeys, comprising 426 units.

Scott Brown Residential Buying and Selling Metro Vancouver Feb. 4 2022
M
Mario Toneguzzi Business reporter
Mario Toneguzzi, based in Calgary has 37 years of experience as a daily newspaper writer, columnist and editor. He worked for 35 years at the Calgary Herald covering sports, crime, politics, health, city and breaking news, and business. For 12 years as a business writer, his main beats were commercial and residential real estate, retail, small business and general economic news. He nows works on his own as a freelance writer and consultant in communications and media relations/training.