The first two condominium towers have been topped off and two more are under construction, but th... 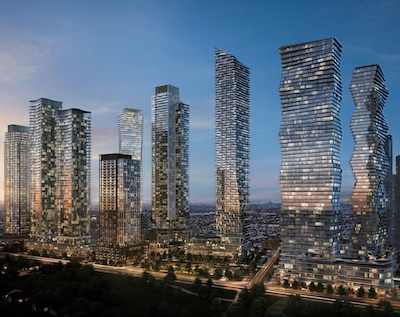 The M City residential development in Mississauga will have eight towers at full build-out. Two of the towers are now topped-off and in the final stages of development before accepting residents. (Courtesy Urban Capital)

The first two condominium towers have been topped off and two more are under construction, but there’s still a lot more to come at the M City development in Mississauga.

The 15-acre community at the corner of Burnhamthorpe Road West and Confederation Parkway was inspired by Mississauga’s Downtown21 Master Plan, which aims to create a more vibrant downtown core with public spaces, educational institutions, a public transit network, walkable streets and intensified residential and commercial developments for the city of more than 700,000  just west of Toronto.

Upon completion, which is anticipated in 2030, the Cooper Robertson-master-planned M City will be an eight-tower, 4.3-million-square-foot development with approximately 6,200 residential units.

Developers Rogers Real Estate Development Limited and Urban Capital launched sales for M1 and M2, two 62-storey towers with almost 1,600 units designed by CORE Architects and interior design firm Cecconi Simone, in the spring of 2017. Construction began the next year on a site owned by the Rogers family since the 1960s.

It also helped spark a flurry of other intensive development activity in the area.

“Everything kind of started to explode after we went in and everybody saw how successful we were with the launch of M1 and M2,” Urban Capital partner Mark Reeve told RENX.

“There’s been a remarkable amount of interest in new developments since then, so we were the catalyst for the rebirth of Mississauga’s downtown.”

Occupancy for M1 is scheduled to begin late this year while occupancy for M2 should begin in the first quarter of 2023.

“One of the things that we did with M City is that we proved that great design really translates into higher selling prices,” said Reeve. “When we launched M City, we were probably at least $100 a square foot higher than anybody else.

“But we had a spectacular product that was very well-designed, and great backing from the Rogers family, and the market responded. We sold it out in record time.”

Construction is up to the second floor of the building’s podium and occupancy is slated for March 2026. IBI Group is the architect and Cecconi Simone is overseeing the interior design.

Sales launched in the spring of 2021 for the CORE Architects and Cecconi Simone-designed, 67-storey, 954-unit M4. The project is also sold out and scheduled for occupancy in January 2027.

Sales for the IBI Group and Cecconi Simone-designed, 36-storey M5 launched in the spring of this year and almost 80 per cent of its 430 units are sold.

It will feature studios, one-bedroom, two-bedroom and three-bedroom suites when construction begins next year.

Each suite will be wired with Rogers Ignite Internet Gigabit and a 5G-ready distributed antenna system will distribute Rogers’ wireless network throughout the buildings to increase connectivity in places like underground parking garages and elevators.

M6 sales could launch next year

The Hariri Pontarini Architects-designed M6 will be 57 storeys and have approximately 900 units.

“We’re moving ahead with M6 and getting it ready to go to market whenever the market’s ready for us,” said Reeve. “We’re not sure when that is, but we’re hoping next year.”

Reeve said they’re watching the performance of other new condo projects to get a better idea of when to launch since recent interest rate increases have slowed sales.

“We deliver these buildings five or six years down the road after we initially sell them to people because they’re big buildings. And people are looking beyond just the interest rate hikes today and realizing it’s going to be a whole new world again five years down the road.

“So we think the investor market is still there, maybe not to the same extent that it was, but I think good products are going to sell.”

M City will also have approximately 85,000 square feet of retail space, most of which is concentrated in M1 and M2.

“We’re very much immersed in the retail leasing process for those two buildings right now,” said Reeve. “So you’ll be seeing some great tenant names coming up, with most of it being service- and convenience-related retail and restaurants.”

Some of those retail outlets should be open by mid-2023, according to Reeve.

The main park has been turned over to the City of Mississauga, which will build it out shortly. There’s also a smaller linear park that runs along one of M City’s north-south streets adjacent to M3.

The developers are also making a $500,000 contribution to public art in the large park. The artists are now being selected.

“There’s a bit of a transit story as well with the new transit system that’s going in around the area, so we’ll be connecting into that,” John Anderton, vice-president and treasurer of the Rogers Private Companies, told RENX.

“We’ll be pretty close to one of the main stops. So from a convenience point of view and a walkability point of view, it scores high marks.”

Rogers Real Estate Development Limited is part of an affiliated group of the Rogers family’s private holding companies, which are the majority and controlling shareholders of Rogers Communications Inc., a diversified public communications company created by the late Ted Rogers.

The M City site was rezoned in 2002 to allow for a wider possibility of land uses, including increased residential development.

Rogers Real Estate Development Limited enlisted Urban Capital in 2007 to “determine how to best crystallize the value for the property,” Reeve said in a 2018 interview with RENX.

Urban Capital has more than 12,000 condo units developed or under development in the Greater Toronto Area, Halifax, Ottawa, Montreal, Winnipeg and Saskatoon.

Don Wilcox Commercial Transactions Toronto / GTA Aug. 8 2022
Steve McLean Business reporter
Steve is a veteran writer, reporter, editor and communications specialist whose work has appeared in a wide variety of print and online outlets. He’s the author of the book Hot Canadian Bands and has taught reporting to college students. He is based in Toronto.