Soneil Investments has closed on two recent acquisitions in Mississauga, a five-property industri... 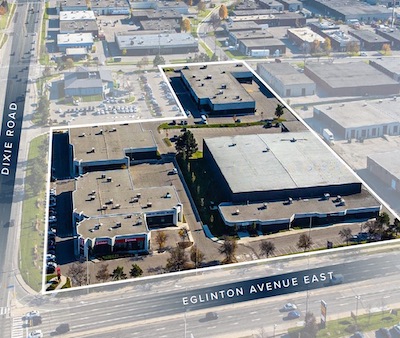 This five-property industrial portfolio at the corner of Dixie and Eglinton in Mississauga has been acquired by Soneil Investments. (Courtesy Soneil)

Soneil Investments has closed on two recent acquisitions in Mississauga, a five-property industrial portfolio on nine acres of land at the Dixie and Eglinton intersection, as well as a 150,000-square-foot office complex in the Meadowvale neighbourhood.

“In a high inflation and rising interest rate market, strategically acquiring properties becomes even more difficult,” said Neil Jain, president and CEO of Soneil Investments. “We saw immense potential in the opportunity to fill vacancies, raise below market rents, and most importantly, capitalize on the location with a better use in the long term.”

They comprise a mix of small- and mid-bay buildings with building heights in the 18- to 24-foot range, Jain told RENX in an interview.

“We prefer the smaller tenants, the smaller and mid-bay stuff,” Jain explained. “Because of the location they’ve been able to use it as a quasi-retail type of use as well, which generally draws higher rents.

“Obviously the gap between retail and industrial has narrowed over time, but that also allows us to change some of the uses back over to industrial as time passes.”

Soneil’s acquisition of the industrial portfolio

The buildings combine for about 140,000 square feet, and the acquisition pushes Soneil’s portfolio over the four million square foot plateau. The buildings were constructed during the late 1970s and renovated just a couple of years ago.

The portfolio was acquired via a competitive bid process, which Jain said was occurring just as interest rates began to rise.

“It was interesting because during the time we were bidding, that was when interest rates really started to go up and the market started to change,” Jain said, noting private and public investors often have different risk profiles to consider.

“We were probably able to put in an aggressive offer at a time when people were unsure, putting their pens down from an investment perspective, similar to when COVID started.”

Jain said these situations, as long as lenders are on board, can offer private investors the chance to “jump on these opportunities pretty quickly.”

He said underlying the acquisition is the land itself, and that Soneil is a long-term investor.

“From a land perspective alone, this type of site is hugely valuable. One of the reasons that we are able to take on these types of sites is because if we are looking at it from a development perspective, our timeline isn’t necessarily five to seven years.

“Whenever the life of the buildings has run out, or it’s the right time to develop be it 10 years or 20 years, we are in it for the long haul.”

The office acquisition involves a four-storey, multi-tenanted building in an established industrial and commercial district.

The building was constructed in the 1980s and renovated to become a BOMA 360 Performance Building about two years ago by former owner Crown Realty Partners, which sold the property on behalf of its third value-add fund.

Much of the surrounding real estate is occupied by industrial buildings, which was one of the attractions of the property, Jain said.

“This area of Mississauga, over time, will probably start to see shifts in what people are creating. Not a lot of people are looking to create too much office these days,” Jain said.

“It’s surrounded by a bunch of industrial assets; in the long term, whether it’s 10 or 20 years from now, industrial might be the right thing to build, or it might be something else. There’ll be a lot of potential once the life of this building runs out.

“But in the meantime there is a ton of life left in it . . .  it’s a great quality building and it’s been maintained very well.”

Both the industrial and office acquisitions are well-tenanted, with occupancy at about 95 per cent.

The office property also has a large and diverse mix of tenants. While the more intensive management requirements of such buildings might turn off some firms, Jain said that was another attraction for Soneil.

“A lot of the class-A office in this area is the same size, but only split among three or four tenants. It creates a lot of concentration of risk, which is something we like to avoid, especially in office. This building has close to 25 tenants,” he said.

“These are the sorts of (assets) we are drawn to, because we have all those management and leasing capabilities in-house.”

Soneil owns over $1B in properties

Soneil, which surpassed the $1 billion mark in its holdings earlier this year, has now acquired about $180 million in assets during 2022. Jain said it’s on the lookout for more.

“I always like to say that our strategy is flexible in the sense that when opportunities come, as they did during COVID, that we can afford to be aggressive,” he explained, “but strategically aggressive.

“If the right opportunities come at the right price, that are financeable and make sense based on what our core beliefs are in terms of add value, we are very much always in the acquisition mode.”

Soneil tops $1B in AUM with 2 GTA industrial acquisitions