Austin Zhang’s Westland Developments has been building homes in Vancouver for years, but only dur... 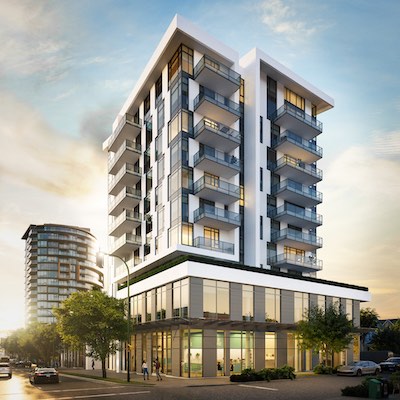 W68 is one of the latest multifamily developments in Vancouver by Westland Developments, which until recently had focused on the single-family market. (Courtesy Westland)

Austin Zhang’s Westland Developments has been building homes in Vancouver for years, but only during the last five has the family-owned company expanded into the multifamily residential market.

Within that short span of time, it has gone from building single-family houses to some of the tallest towers in the region.

Fifteen years ago, Zhang’s family moved to Vancouver from Northern China and although his parents didn’t speak English, they threw themselves into the development industry and formed a network of friends from China who became investors. They ran a thriving business building mostly high-end, single-family houses and then they started thinking bigger and taller, acquiring parcels of land throughout Metro Vancouver.

“Everything was built upon trust. Building for ourselves, for our friends, and those friends turned into friends plus investors. Now, here we are. It definitely has been a long road getting here,” said Zhang.

Zhang, who is managing director for Westland now that his parents have mostly stepped back, has six major projects in various stages.

The Grey mixed-use building at Dunbar and 16th Avenue has completed. The firm has two towers in Metrotown in Burnaby under review, including a 52-storey condo tower that, when built, would be one of Metro Vancouver’s tallest.

That tower will be paired with a 22-storey rental tower which will include some affordable housing units.

“I’m very proud of that one, and its unique architecture,” Zhang said of the design’s tulip-shaped exoskeleton.

He has another mixed-use, 50-storey tower in Surrey City Centre (including a mechanical floor), which has not yet been approved.

Another project under review is at the University of British Columbia, a two-building complex on a rare section of freehold land in the area. That project will include rental aimed at student and faculty.

Zhang had originally planned for a 22-unit building but because of changes to the University Endowment Land’s neighbourhood plan, he is revisiting his proposal to add considerably more density.

“Now we are going back to the drawing board and resubmitting the application for a higher-density building that will incorporate both market rental, affordable rental and market condos. It’s not confirmed yet, but I would say (we hope to build) north of 100 units.”

As well, in mid-June, Westland launches pre-sales for W68, a mixed-use 10-floor building at W. 68th and Granville, in Marpole, near Richmond, where Westland’s office is located.

The mid-rise building will have retail at the bottom and strata office on the second floor, with 64 studio, one-, two- and three-bedroom condo units above.

“We are keeping ourselves busy. We haven’t taken a break through these strange times,” Zhang said. “We are moving forward on all fronts in terms of our projects.”

Zhang was fresh out of school when he started running the company five years ago. He had already been acting as translator for his parents, then took on more responsibilities acquiring land and handling the meetings with consultants and staff from the municipalities.

His father retired, and his mother, an engineer, is still involved in some of the design aspects of their construction team. His brother is in school, and his sister moved back to China with her own family.

Westland Developments has a staff of seven, but Zhang said he’s building a team to handle construction of the towers.

In the near future, he is keen to integrate all aspects of tower development.

“In the beginning, we had no team, so it was just a piece of land and investors and reaching out to architects and to the city and engineers, and I was the translator.

“Everything just kind of spiralled from there. Five years later, we have expanded quite significantly since our first purchase of multifamily use land.”

At the heart of the business are the investors who believed in the Zhang family vision and put their money behind it.

Westland’s first move into multifamily residential development, said Zhang, was its involvement in what became Cressey Development Group’s McKinnon condo building in Kerrisdale, which went on the market in 2016.

Working with a realtor they knew from their single-family house building business, Westland acquired several properties that became one of the largest strata assemblies on the west side of Vancouver. It then sold the land to Cressey.

“That was the first time we ever poked at multifamily,” Zhang said. “At the time, land price wasn’t as outrageous as prices today, especially on the West Side. That’s before everything boomed — nobody was focused on land assemblies.

“Then another friend introduced us to the owner of Dunbar Lumber,” he said, referring to a well-known lumberyard on the West Side. Westland purchased the large site, which had been zoned for one level of commercial with three storeys of residential above.

It sits at the city’s highest elevation, with unobstructed views of West Vancouver. Zhang said Westland marketed the condo building at the peak of the market in 2016, selling at around $1,600 per square foot.

“We completed on it late last year. That was the first one we took into construction,” he said. “Now we attract investors from all backgrounds for some of these larger projects that we have on the go.”

Westland Developments was content operating under the radar until its recent growth.

However, now that the projects are large, for the first time the company is focusing on establishing a public profile in order to grow the business and become a major player in Metro Vancouver.

“We are trying to get the name out there a little bit, especially with the size of some of our projects. We are competing with some of the most well-known developers in town, including Concord, Bosa and Anthem. We have to make a bigger splash when it comes to larger projects.”

Life sciences real estate: The next sound investment in Vancouver