Where do Saskatoon industrial leasing rates go from here?

Where do Saskatoon industrial leasing rates go from here?

Oil and gas prices will continue to drive economic growth in Saskatchewan and Alberta through 202... 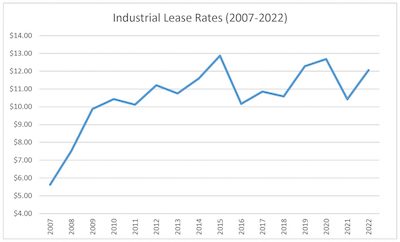 Saskatoon industrial leasing rates since 2007. Click this link for a full-sized, pop-out version of the chart. (Courtesy ICR Commercial)

Oil and gas prices will continue to drive economic growth in Saskatchewan and Alberta through 2024, according to the Conference Board of Canada.

Saskatchewan will also benefit from higher prices for commodities such as wheat and potash.

Saskatchewan is reported to lead our country in 2022 with a growth of 7.6 per cent. However, we’re experiencing inflation at a rate we’ve not seen in the past 15 years.

The costs of construction and land have been rising.

There is a shortage of labour which is putting pressure on construction wages.

The logical conclusion is that the cost to lease industrial real estate will likely break through to a new high in the months ahead.

Whereas the current average rental rate, according to our ICR Commercial 2Q22 Industrial Market Survey, is $11.82 per square foot, we know that a developer needs to see a $13.50-per-square-foot net effective rate on shell space to justify building new warehouse today.

Let’s look back in time

There was a 20-year period before 2005 in which warehouse rental rates flatlined.

I know of one example in which a Saskatoon industrial tenant renewed their lease for four five-year periods at $4.50 per square foot net.

They may have been a bit on the high side and sometimes on the low side, but their rate did not move over 20 years.

The fact our net effective industrial rates have been bouncing around in the same territory for almost 10 years is fascinating.

When quoting average rates, it’s important to mention that there can be a considerable difference in price between 2,000 square feet and 200,000 square feet.

There are significant economies of scale in construction costs that must be factored in.

If you came to me today and wanted to lease a new warehouse, it would take one full year to complete the project due to labour and supply chain issues.

It worsens if you isolate that statistic to the Marquis area (our main industrial area in Saskatoon), where the current vacancy is just 1.83 per cent.

If we do not see more spec building, the resulting supply/demand factor will affect those rates in a way we’ve not seen for over t10 years.

It’s going to be very interesting to see where the line on this graph moves to during the next five years!

Cost adjustments and the slow road to a property sale

When the clock is running out to lease business space

Barry Stuart Commercial Brokers National Aug. 12 2022
Barry Stuart Managing Partner and Senior Sales Associate , ICR Commercial Real Estate
Barry has been with ICR since 1996 and is at the heart of ICR’s ongoing corporate growth. His primary focus is origination and execution of commercial real estate sales throughout Saskatchewan. Barry offers experienced representation as a broker in all asset classes and brings an intuitive insight to his client interactions. He is a four-time recipient of ICR’s annual Saskatchewan Top Producer Award and is a regular contributor to industry publications, as well as the co-author of the blog The Saskatchewan Edge. Barry is married with five adult children and is kept very busy during their family fun time with seven grandchildren.