A $100-million project four years in the making is complete at Crombie REIT‘s Avalon Mall in St.... 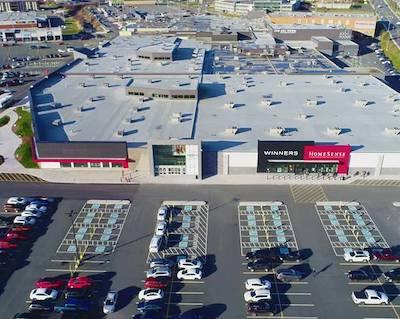 A $100-million project four years in the making is complete at Crombie REIT‘s Avalon Mall in St. John’s.

The only super regional mall in Newfoundland and Labrador, and the largest enclosed mall in the province, was built in 1967. Fifty years later, Avalon was in need of refurbishment, a new tenant mix and additional parking capacity. A significant part of the project was completed during the pandemic, adding an additional layer of complexity to the work.

“It took some great work by both our contractors and third-party contractors, and our own internal development and construction and operating and leasing teams to work through it,” said Crombie (CRR-UN-T) executive vice-president and chief operating officer Glenn Hynes.

Crombie spent approximately $30 million on a four-level parking structure to accommodate 875 vehicles. That opened in 2018 and pushed capacity to 2,900 vehicles.

Another $20 million was spent on interior renovations. Common areas were transformed with contemporary porcelain tiles and acoustic ceiling tiles, and updated LED lighting fixtures were added.

The food court was expanded with 150 seats, and new washrooms and sorting stations that allowed the mall to divert organic waste to an on-site composter were added. Avalon holds a BOMA Best green building certification.

Enclosed malls were more attractive entities late in the last decade than they are today, but the mall’s size and status — and the province’s often unpredictable weather — made investing a significant sum in Avalon a proposition that made sense.

Hynes said Avalon was almost completely full and often couldn’t accommodate new tenants because it didn’t have the space.

Even before online sales really took off, it was realized that more experiential elements were required to make the mall an even more popular destination.

So, the province’s first The Rec Room entertainment complex was added to Avalon and opened in a 30,600-square-foot space in 2019. This was in addition to an existing 12-screen Cineplex movie theatre.

While these projects were in motion, Sears Canada was closing its stores across the country, leaving Avalon with a major vacancy in January 2018. This was seen as a positive move, however, because it opened up new possibilities in a large space which Crombie could redevelop.

Hynes said the $50 million spent on this second aspect of Avalon’s makeover has provided compelling returns because new tenants are paying more in rent than Sears.

Winners and HomeSense shifted locations within the mall into an expanded 50,000-square-foot space and H&M took over their previous location. Tommy Hilfiger, Gap, Banana Republic and Old Navy were brought into Avalon, filling spaces in the 10,000- to 20,000-square-foot range.

“Those were first-to-Newfoundland and Labrador tenants,” said Hynes. “We never hit that level of vacancy before that we could accommodate them.”

“Although it looks like it was a fairly consistent plan from 2017 to today, Sears moving out of the mall was really the catalyst for that redevelopment of the second piece,” said Hynes. “This was not a difficult decision for us to make the initial investment.

“And then when the Sears opportunity occurred, that was a no-brainer as well.”

Crombie acquired the Kenmount Business Centre site adjacent to Avalon that’s now the home of a 46,000-square-foot The Brick store, also a first in Newfoundland and Labrador when it opened last November.

“The two categories that were probably fairly strong at Sears would have been appliances and furniture,” said Hynes. “Now having The Brick footsteps away from the rest of the mall brings that category back to the mall in a significant way.”

“We’re optimistic that as things open up here and people get more comfortable travelling, that we’ll get the spaces filled up. But we’re not complaining at all with the deals that we’ve gotten done over the past year. I’m not sure if any of the deals that we had fell apart.”

Avalon had sales of approximately $700 per square foot before the redevelopment was completed and there are hopes all of the work that has gone into the mall will elevate that figure.

Newfoundland and Labrador hasn’t been hit as hard by COVID-19 as many other parts of Canada, and Avalon was shut down entirely only for a relatively brief period.

Hynes said the biggest impact the pandemic had on the retail sector was in disrupting supply chains and causing some inventory shortages.

While it did escape the worst of the pandemic’s effect, the redevelopment did suffer some construction delays and inconveniences due to measures taken to curtail the spread of the coronavirus.

New Glasgow, N.S.-based Crombie is one of Canada’s leading retail property landlords. Its strategy is to own, operate and develop high-quality grocery- and drugstore-anchored shopping centres, freestanding stores and mixed-use developments.

Crombie owns 280 properties, with 233 of them being grocery-anchored, largely by Sobeys stores.

“The thing that’s attractive about grocery-anchored centres is that the grocery store draws traffic,” said Hynes.

“And of course our grocery-anchored centres are located at Main and Main and in residential neighbourhoods across the country, so they’re convenient for people to shop at.”

Avalon is the only super regional mall Crombie owns and there are few enclosed malls in its portfolio. That’s helped the REIT’s rent collections surpass 98 per cent even during the pandemic, said Hynes.

While Avalon isn’t a likely candidate for mixed-use intensification, Crombie has identified 27 of its properties for the addition of multifamily or other buildings. About a dozen of those are in Vancouver and there are others in Montreal, Toronto, Halifax, Edmonton, Calgary and Ottawa.

Crombie has committed about $600 million to its first six mixed-use intensification projects and all should be substantially completed by the end of 2021.

“One thing that’s great about the grocery business is that it’s very defensive and it’s very stable, but it’s also not as high-growth as other types of businesses,” said Hynes. “The grocery leases that typify our grocery-anchored centres would be slightly lower-growth in rent.

“So we’re trying to balance the stability, defensiveness and consistency of the grocery part of our business, which is our core, but also we’re hoping to augment that with our development where we think we can get greater cash flow growth and create more net asset value.”

Steve McLean Residential Development National May. 6 2021
Steve McLean Business reporter
Steve is a veteran writer, reporter, editor and communications specialist whose work has appeared in a wide variety of print and online outlets. He’s the author of the book Hot Canadian Bands and has taught reporting to college students. He is based in Toronto.