First Capital and Pemberton Group are planning 66- and 46-storey multiresidential towers as part... 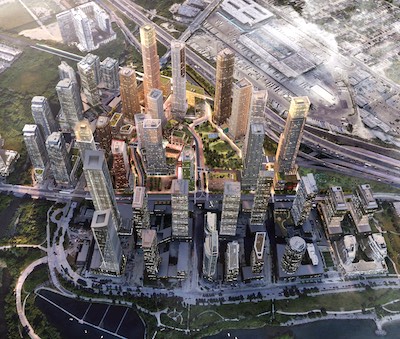 A rendering of the proposed 2150 Lake Shore redevelopment in Toronto. (Courtesy First Capital)

First Capital and Pemberton Group are planning 66- and 46-storey multiresidential towers as part of phase one of the ambitious, master-planned 2150 Lake Shore development in Toronto.

First Capital and CPP Investments had originally acquired the 28-acre, former Mr. Christie site at 2150 Lake Shore Blvd. W. in south Etobicoke from Mondelez for $26 million each in 2016. First Capital later exercised its option to purchase CPP’s 50 per cent interest in the site for $56 million and subsequently sold it to Pemberton Group for $156 million last year.

“We recognize them as being a key strategic partner for us,” First Capital development vice-president Jennifer Arezes told RENX of Pemberton. “They were aligned with our vision and they bring deep residential development and community-building experience to the table, which we know is vital to this project’s success.”

British architectural firm Allies and Morrison was chosen in 2018, after an international competition, to be the lead architect for the master-planned community.

A site plan approval re-application has now been submitted to the City of Toronto.

2150 Lake Shore will be built in phases

The overall plan for 2150 Lake Shore calls for approximately 7.5 million square feet of density in 36 buildings to be built over six phases. That includes approximately 7,500 homes of various types, sizes and prices, as well as office and retail space.

“We see 2150 Lakeshore as a five-minute community, which means that all day-to-day amenities, services and transportation options are located within a five-minute walk for the residents living within this new community,” said Arezes.

The first phase will also include five mid-rise buildings in addition to the two multiresidential towers.

“The height and scale of what we’re proposing is consistent with what exists in the neighbourhood today,” First Capital executive vice-president and chief operating officer Jordan Robins said.

The buildings will provide about 1.05 million square feet for 1,358 residential units, with more than 40 per cent of the housing units having two or three bedrooms. There will be purpose-built rental apartments and condominiums, and 10 per cent will be designated as affordable.

An indoor pool, lounges, flexible spaces, a gym and co-working spaces are among the expected interior amenities.

The first phase will also include a transit hub comprising a new GO Transit stop and a rerouted Toronto Transit Commission streetcar line that will come into the site. A road will be created along the north end of the site to help divert and relieve traffic volume along Park Lawn Road and Lake Shore.

“Our goal really is to re-pedestrianize those two streets to create more of a main street feel and character with shop fronts and increased pedestrian activity,” said Arezes. “The retail includes an approximately 35,000-square-foot food store and then some small-scale shops and services that tie into the GO station, as well as front onto the various public spaces.”

There are no timelines in place for the first phase as 2150 Lake Shore is still going through the approvals process, but Arezes and Robins would like to begin construction as soon as possible.

This will be First Capital’s largest development. It’s estimated the complete project will have an approximate 20-year build-out once construction begins.

The site will also eventually include a new community centre to be owned and operated by the City of Toronto, a public library, two public daycares, a human agency space operated by the city, and monetary contributions for streetscaping and public art.

Arezes said more than 25 per cent of 2150 Lake Shore, roughly the size of five football fields, will be public open space. That will include two public parks and two privately owned public spaces. There will be landscaped areas and pedestrian connections throughout the site.

Buildings will be situated so there’s a minimum of five hours of daylight, with no shadows, on the park areas.

All servicing, loading activities and parking will be below grade to further prioritize and activate the open spaces. The site will also feature an open-air, but covered, retail galleria.

The developers are also planning a district energy system for 2150 Lake Shore as a sustainability measure.

Steve McLean Residential Development Toronto / GTA May. 4 2022
Steve McLean Business reporter
Steve is a veteran writer, reporter, editor and communications specialist whose work has appeared in a wide variety of print and online outlets. He’s the author of the book Hot Canadian Bands and has taught reporting to college students. He is based in Toronto.