Adera Development has carved a niche in Metro Vancouver’s multiresidential market as a builder of... 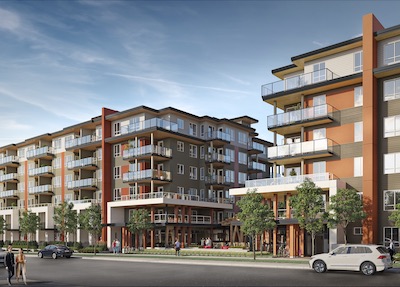 PURA is a 248-home mid-rise condo and townhome project which will be developed by Adera Development in Surrey Centre. (Courtesy Adera)

Adera Development has carved a niche in Metro Vancouver’s multiresidential market as a builder of wood-frame and mass-timber projects. It will be putting that expertise to work in two new developments this fall.

The developer will launch Pura, a 248-unit townhouse and condo project in Surrey on Sept. 24. It will be the first mass-timber development in Surrey Central’s West Village, near the downtown Surrey Centre.

That will quickly be followed by the launch of a 201-unit residential project in West Coquitlam, called Sol, on Oct. 1.

The Pura site in central Surrey has been cleared and excavation will likely start in October, with an estimated 18-month construction schedule. Eric Andreasen, Adera’s senior vice-president, marketing & sales, said there has already been substantial interest in the project, with about 3,000 people in its database.

Sol is a mix of 92 strata and 109 rental units located atop a hill off Clarke Road and Como Lake Avenue, a few minutes walk from Burquitlam SkyTrain station and across the street from Adera’s recently completed Duet.

All 132 units at Duet, including townhomes and an apartment building, have sold out. The 60 Duet Cityhomes townhome project appealed to buyers looking for ground-oriented housing, said Andreasen. All are mass-timber construction.

Coquitlam is often a draw for first-time buyers, he added. By including rental units at the Sol project, he targeted those people who don’t yet have the down payment to buy but who want to live in the area at the same standard.

The units are grouped around a courtyard so rentals and strata have the same look and feel.

“We have a niche of people who want to rent in a place that feels like they are owning, but with the flexibility of renting. It’s a beautiful complex.”

That’s in part due to the wood construction. The firm is so committed to wood it has even patented its own technology that limits sound transmission between walls and floors.

Andreasen and the team at Adera believe the benefits of building with wood are well-documented.

Mass timber is an umbrella term for wood products manufactured in such a way — usually layers of wood bonded together — as to offer comparable strength to concrete and steel. However, mass timber is lighter than those conventional materials, requiring less foundational support and making it easier to transport.

A cross-laminated timber (CLT) panel can withstand high loads, such as a seismic event, because it can bend before breaking, unlike concrete.

A solid glulam beam (glue-laminated timber) is naturally fire retardant because any charring greatly reduces combustion. It’s like trying to start a campfire with a log.

Mass timber often comes in precision-cut prefabricated components, such as CLT panel walls, which are manufactured off-site and trucked in, reducing on-site building times and disruption to nearby residents.

And wood can be harvested in a sustainable manner — unlike the manufacture of cement, which is the world’s third-largest emitter of carbon dioxide.

Adera, which specializes in six-storey residential and is a well-established brand name in the region, is the outlier among a sea of concrete towers. With the exception of a 73-unit townhouse project at Britannia Beach on Howe Sound, Adera focuses exclusively on incorporating mass timber into its buildings.

The multi-phased Britannia Beach development, in a former mining town, is not mass timber only because it’s a partnership with Macdonald Development, which has been working on the site since 2004.

The scenic community includes the townhouse and a commercial component because of the limited geography. It’s like a mini version of Whistler.

Andreasen referred to the unique project as “a jewel sitting on the side of my desk.”

“As we are able to get approvals to go ahead on the next buildings, we are selling them. We have six under construction, and we are selling into Phase II right now. So the first 30 homes have been sold, and we have another 20 homes in Phase II. We are moving slowly through that, because we have to get a building permit before we can do anything. It takes longer. But there’s a lot of interest.”

But mass timber is the developer’s focus, a specialized market they have almost entirely to themselves.

“Wood is the only thing that reduces the amount of carbon dioxide in the atmosphere, using sustainably harvested wood that is grown locally and not transported from a long way,” said Andreasen. “It’s our personal opinion that extensive use of mass timber in the building industry is the only way to effectively slow down climate change and then possibly, if everyone was to do it, you could start to reverse some of the effects of our industry.”

Adera has demonstrated a proven market for sustainable development, though the overwhelming majority of developers continue to build with primarily steel and concrete.

“I can say in their defence it’s not an easy task,” said Andreasen. “We have been working hard at this.

“We’ve had our ups and downs and that’s why we’ve gone to the lengths we have to demonstrate (the value of wood) so that people get it. And still some people don’t care. They are driven by price.”

Educating the industry, and the public

In the wood building market, possibly the biggest hurdle to overcome is lack of knowledge and familiarity. Professionals, including architects and engineers, train in conventional materials, as do the trades.

And then there is the public, which does not understand what mass timber means.

For a developer specializing in mass timber, a key part of the job is educating the buyer, said Andreasen.

Adera’s presentation centres include videos explaining the cycle of their patented SmartWood technology, from harvesting of trees to the manufacture of mass timber to Adera’s construction methods.

A few years ago, the company hired sound engineers to test and run data on a sound dampening system it built inside a warehouse. It became a patented design called QuietHome which performs as well, if not better, than concrete.

Even so, it wasn’t enough to ask people to read documentation on the success they’d achieved in terms of dampening sound between floors and walls, said Andreasen. They had to demonstrate how the system works.

“Our system is proprietary in the sense that we have different features built into it so that it doesn’t allow airborne talking noise to transmit through walls, as you have with standard wood frame.”

Editor’s Note: This article was updated after publishing with additional information about the Britannia Beach development.