The pandemic may have drained city centres of their lifeblood – office workers – through much of... 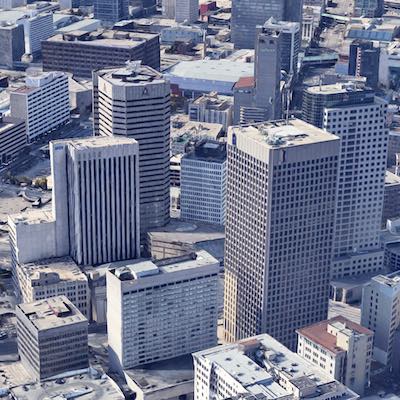 Portage and Main in downtown Winnipeg is now getting serious competition for its office tenants from the SHED District, just a few blocks away and anchored by the Bell MTS Place arena. The arena can be seen in behind, and between, the tall office towers in the foreground. (Google Maps)

The pandemic may have drained city centres of their lifeblood – office workers – through much of 2020. However, it is not the office apocalypse some worried about just a few months ago.

That’s the consensus expressed by some of Winnipeg’s biggest office owners, speaking at the virtual Winnipeg Real Estate Forum on Oct. 28-29.

Even before the pandemic, Winnipeg’s office market had faced significant upheaval over the last few years, noted Ryan Behie, vice-president and managing director of CBRE in Winnipeg.

That’s largely due to the addition of True North Square, a mixed-use mega-project that added more 350,0000 square feet of new class-A space. It is the largest project downtown in decades, with another 300,000-plus square feet in the pipeline.

“The expansion of downtown inventory created” openings in the class-A market that had a trickle-down effect to the class-B market, said Behie, adding it “resulted in a shuffling of the deck” among downtown tenants.

“In the three years prior to 2018, downtown class-A vacancy trended around seven per cent.”

With the opening of the first True North Square building 242 Hargrave in 2018, however, a chain reaction occurred.

A number of large class-A tenants in existing office buildings – mostly centred around the commerce hub Portage and Main – began migrating to the development built around a plaza in the heart of the city’s growing sports, hospitality and entertainment district (nicknamed SHED).

Since then, the office market in downtown had been on the road to recovery, until the pandemic hit. Like the rest of Canada’s major urban centres, downtown office space vacancies have been slowly rising due to COVID-19.

CBRE data shows vacancy at 12 per cent nationally. Winnipeg is just below the national average for office vacancy at 10.8 per cent while downtown was just over 12 per cent.

Among those landlords grappling with the “musical chairs” of tenants coming and going in class-A space in recent years is Artis REIT (AX-UN-T), said its vice-president of investments and development, Fabricio Mendes.

The Winnipeg-based, international company operates several downtown properties, including a class-A office tower near Portage and Main, 360 Main. Built in 1979 but recently renovated, it is also connected to a new Artis project underway: a mixed-use, multifamily residential tower at 300 Main.

Mendes said True North’s project “created a lot of imbalance in the market.” However, that was mostly felt in class-B offices.

Those include Wawanesa Mutual Insurance Co., headquartered in the city and Canada’s fourth-largest insurance company. The firm has staff spread across Winnipeg, including a class-B high-rise downtown, but will soon occupy the fifth tower at True North Square.

Construction on the 19-storey Tower Five, which will become Wawanesa’s headquarters, is to begin in 2021.

“In our business, like many others, the problem is the attraction and retention of talent,” said Evan Johnston, senior vice-president of legal and strategy at Wawanesa. “Real estate is part of that solution.”

A new building with new amenities helps. As well, it will bring most staff under one roof. For the time being, however, 98 per cent of its staff is working from home.

“Philosophically, we’ve said the first priority is the safety of our employees,” he said.

Wawanesa does not foresee employees returning until mid-2021, but the pandemic has not changed its outlook on downtown. Wawanesa remains committed to True North Square,  and is “actively in the design phase,” he said.

Panelist Jamie Petch, senior-vice president for office at Toronto-based KingSett Capital, also looks at the pandemic as an interruption rather than a harbinger of a shrinking market.

“We will return to normal,” said Petch.

Kingsett owns the 330 Portage Avenue class-B office tower in Winnipeg, which is located in the SHED. “Being in the office really is important for value creation and the culture.”

As for its class-B property, location is critical, Petch added. As part of the SHED, the tower remains attractive because of surrounding amenities, not the least of which is Bell MTS Place where the NHL’s Winnipeg Jets play.

So too is upping the ante for onsite amenities. Petch said 330 Portage features a new initiative already in use in Toronto, offering ready-to-go features like pre-WiFi enabled offices and desks outfitted with plexiglass dividers.

Perhaps hardest hit by the upheaval in office has been Regina-based Harvard Developments Inc, owner of 201 Portage.

“We’ve been able to backfill those spaces,” said Aaron McDougall, vice-president of leasing at Harvard. “Rental rates were modestly impacted, but we’ve seen them move back to where they were.”

Again, Harvard upped its offerings with a renovated lobby and concourse.

“The experience of a tenant coming into that space is going to be just like a new class-A building.”

McDougall added the efforts have paid off with BMO becoming a new tenant, among others.

Although the pandemic presents challenges, it’s had one unexpected benefit. With most tenants working from home, they’re not negatively impacted by ongoing renovations, McDougall said.

True North Square “demonstrated the real desire in the marketplace that tenants are looking to upgrade their space,” he added.

That said, McDougall, like other panelists, argued the competition between SHED and Portage and Main is healthy for the market.

“I believe the two can live harmoniously together.”

Winnipeg CRE could be a Western leader post-COVID

Don Wilcox Commercial REITs National Oct. 30 2020
J
Joel Schlesinger Journalist
Joel is a Winnipeg writer covering a wide variety of topics from personal finance and real estate to health and fitness. His work has appeared in many major Canadian daily newspapers, including the Winnipeg Free Press, Vancouver Sun and The Globe and Mail.