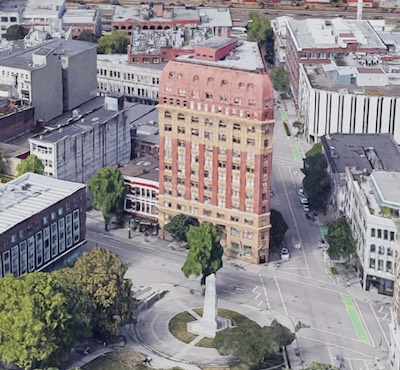 The Dominion Building, located at 207 West Hastings St., was the tallest high-rise in the British Empire when it was completed and opened in 1910. Rising 174 feet over its 13 storeys, the building was eclipsed two years later by the nearby Sun Tower (initially called the World Building) at 17 storeys and 269 feet. That building is also owned by Allied.

Financial details were not immediately disclosed. Allied expects the acquisition to close in November, subject to customary approvals and conditions.

“We’ll be a worthy successor owner to Army & Navy Properties in terms of both sensitivity and commitment to downtown Vancouver,” Michael Emory, Allied’s president & CEO, said in the Tuesday announcement. “Because of its location, building attributes and operating history over many decades, the Dominion Building will enable us to accommodate smaller users who need more flexible lease terms.

“This will be particularly helpful as we reconfigure other buildings with larger floorplates to accommodate larger users with longer-term requirements.”

Allied notes the design of the Dominion Building includes a “grand banking hall at the base” which covers the entire lot, topped by smaller floor plates above for office uses.

The building has a rich history in downtown Vancouver, as would befit a 111-year-old icon. Allied alluded to its heritage in the announcement, noting it was completed in the midst of an economic boom as part of an effort to make Vancouver the financial hub of Western Canada.

Because the lot was trapezoidal, architect John S. Helyer designed the building with “flat-iron” proportions. The “flat” portion faces southeast (toward Sun Tower) at West Hastings and Cambie Streets.

Samuel Cohen, founder of Army & Navy Department Stores, acquired the building in 1943 and the family has operated it ever since. The surplus store itself, which was part of the building’s tenant makeup, operated until it closed in 2020 as the COVID-19 pandemic deepened and caused turmoil for many retailers.

The Dominion Building is at the eastern edge of Gastown, equidistant from Allied’s The Landing 2 (375 Water St.) and Sun Tower (128 West Pender St.).

Allied expects to initially fund the acquisition with its operating line of credit.

Allied Properties REIT is a Toronto-based trust which owns and operates more than 200 properties, comprising about 14 million square feet, across Canada.

The portfolio is focused on major urban and TAMI centres such as Montreal, Ottawa, Toronto, the Kitchener-Waterloo region, Edmonton, Calgary and Vancouver.