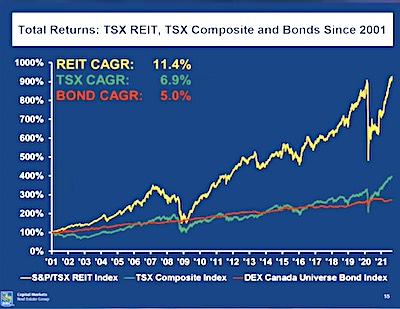 Canadian real estate investment trust (REIT) and real estate operating company (REOC) performances have made a dramatic comeback since the early dark days of the pandemic.

RBC Capital Markets Real Estate Group managing director Carolyn Blair did a deep dive into the numbers during a Sept. 28 presentation as part of the virtual RealREIT conference. Blair opened by highlighting changes in the Canadian REIT market over the past year.

Flagship Communities was the only REIT to issue an initial public offering (IPO) on the Toronto Stock Exchange (TSX) since last September. Brookfield Property Partners and Northview were privatized, while WPT’s privatization has been announced but not yet finalized.

Of the 46 REITs and REOCs included in Blair’s analysis, there were 19 distribution increases by 13 of the entities and only three distribution cuts.

“That’s a welcomed improvement from last year when there was an unprecedented 11 distribution cuts by nine REITs and REOCs,” said Blair. “Eleven of this year’s increases were from diversified (REITs), and six of these hikes partially reversed cuts announced last year.”

The aggregate TSX market capitalization for Canadian REITs has increased by $27 billion to $99 billion in the largest ever one-year gain. That total is also $4 billion above the pre-pandemic peak reached in January 2020.

The year-to-date (to Aug. 30 unless otherwise specified) equity issuance by REITs and REOCs is $2.6 billion in 18 transactions, with 60 per cent occurring in the usually quiet period from June to August.

That’s already ahead of 2020’s total of $2.5 billion, which represented the third-lowest issuance since 2008.

Thirteen TSX-listed REITs and REOCs have done equity raises in 21 offerings since September 2020.

Dream Industrial, Granite and NorthWest Healthcare Properties were the three most active, collectively accounting for 54 per cent of the equity raised.

Industrial REITs raised 43 per cent of the equity, followed by residential at 21 per cent, office at 17 per cent, retail at nine per cent and diversified and seniors housing at six per cent.

For the third year in a row, no equity was raised for hospitality, which is represented by just one REIT.

The weighted average distribution yield so far this year is 3.8 per cent, which is down more than 200 basis points from 2020. Similar to the past several years, the yield range was zero to just over 8.5 per cent.

“The ones that retain more of their AFFO, either to serve as a risk cushion or to find growth, tend to be more sustainable,” said Blair.

The simple average net-debt-to-enterprise-value ratio for the REITs and REOCs is 49 per cent, with a weighted average of 43 per cent. Both figures are down eight points from last year.

Thirteen of the businesses are under 40 per cent, up from five last year. Eight have leverage above 60 per cent, less than half of last year’s total.

“Keeping debt in reasonable territory is seen by many to not only be good risk management practice for REITs but also a great source of growth potential,” said Blair. “There’s nothing like a good crisis to encourage folks to reduce their risk profile.”

REITs offered a return of 43 per cent over the past 12 months compared to 27 per cent for the TSX Composite Index, one per cent for properties and negative two per cent for bonds.

Over the past five years, REITs had an average 12 per cent compound annual growth rate (CAGR), the same as the TSX Composite Index, but better than the five per cent for properties and three per cent for bonds.

The 43 per cent return for Canadian REITs was better than the 41 per cent earned in the United States, the 32 per cent in Europe and the 20 per cent in Asia.

The REIT index has had a CAGR of 11.4 per cent since 2001, compared to 6.9 per cent for the TSX Composite Index and five per cent for bonds.

“While the REIT index and TSX wiped out nearly five years of gains in just over one month at the beginning of the pandemic, mercifully both have since recovered,” said Blair.

Hospitality is the top-returning sector at 66 per cent, albeit for just one entity, which is followed by diversified at 63 per cent, industrial at 49 per cent, residential and retail at 41 per cent, seniors housing at 37 per cent and office at 25 per cent.

Last year’s comparable 12-month returns were industrial at 11 per cent, residential at -10 per cent, retail and office at -17 per cent, diversified at -30 per cent, seniors housing at -35 per cent and hospitality at -60 per cent.

Of the 40 entities that have been trading for at least five years, 28 have CAGRs above 10 per cent and all but two are in positive territory.

There are four REITs and REOCs that haven’t cut distributions over the past 10 years, have five-year AFFO CAGR per unit and net asset value (NAV) CAGR per unit of at least three per cent, an AFFO payout ratio of below 90 per cent and net debt to enterprise value of less than 50 per cent: Allied, CAPREIT, CT REIT and Killam.

Impact of the pandemic

Despite the huge impact of the pandemic, the stock market recovery was the fastest on record by four to six times over the real estate correction of 1989, the tech bubble of 2000 and the financial crisis of 2008.

The TSX dropped 37 per cent in one month early in the pandemic and fully recovered in eight months on its way to record highs.

While REITs have largely recovered from their deepest depths, it hasn’t been even among sectors.

Industrial was the only REIT asset class that had delivered a positive return by last November, at 14 per cent, when COVID-19 vaccines were announced.

The pandemic caused a surprising lack of damage to REIT and REOC cash flows. Same-property net operating income for all asset classes was -2 per cent in 2020 compared to an average of +2 per cent since 2004.

“Long in-place leases and government subsidies served to mitigate the damage, but you may be surprised to learn that business insolvencies reached a low in 2020, down 25 per cent from the prior year,” said Blair. “So far, 2021 business insolvencies are even lower with only 1,211 filings year to date.”

It remains to be seen what impact the expiry of government subsidies will have on that number.

There’s also been minimal damage to REIT property values during the pandemic. NAV per unit growth was up 13 per cent to the end of August, more than reversing all of 2020’s losses.

Industrial REITs had seven per cent NAV per unit growth and residential was at three per cent last year, making them the only ones in positive figures.

Steve McLean Commercial Strategy National Oct. 5 2021
Steve McLean Business reporter
Steve is a veteran writer, reporter, editor and communications specialist whose work has appeared in a wide variety of print and online outlets. He’s the author of the book Hot Canadian Bands and has taught reporting to college students. He is based in Toronto.